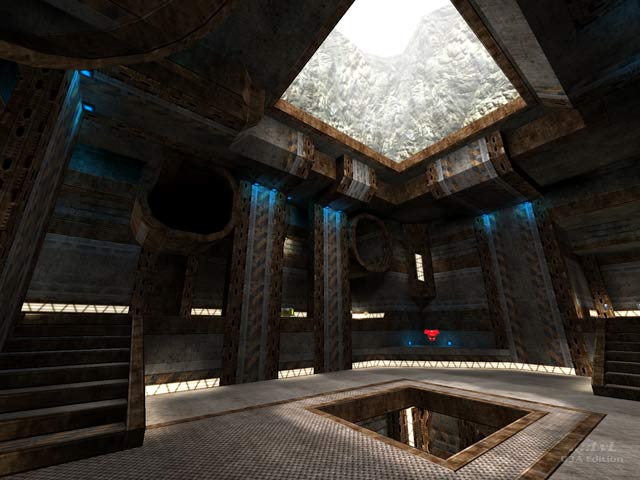 Swelt's career in ProMode mapping began with his involvement with the Challenge ProMode (CPM) clan Nobles and In December of 2000 CPM finally became CPMA with the mod's first public release featuring multi-arena support. Because there were very few Team Death Match (TDM) arenas suitable for play in CPM at this time Swelt started learning to make his own. His first map (NODM1) was a homage to The Bad Place (dm4 from Quake) but his second map, PowaHaus (NODM2), and released at the same time back in August 2002, was an original creation optimised for team play with CPM physics. This level was originally reviewed on ..::LvL in December of 2002.

January 2003 saw the official release of PowaHaus as part of CPMA version 1.0 in map pack 4 along with another one of Swelt's TDM maps for Nobles - Iron Lung (or cpm16 aka NODM3). In order to understand the history and development of the remake on offer here we must first take a look at the original.

CPM18 is basically a 3-tiered level distributed across 3 main areas. The central area houses a Mega Health (MH) tucked away in a vulnerable corner of the bottom part of the map accessible only by dropping down from the upper tiers or via a dual teleport system that will take you back up to the top tier above it. A Plasma Gun (PG) and Rocket Launcher (RL) are available in the adjoining areas and there is also a Shot Gun (SG) available as you exit the teleporter on top of the map. Green Armour (GA) and a Grenade Launcher (GL) can be grabbed at the base of a bounce pad which will carry you up to a Yellow Armour (YA) on the 2nd tier or straight up to the 3rd tier depending on where you hit the trigger pad. A 25 health bubble floating in mid air can be reached by double jumping from any one of 4 windows that are to be found here.

Flanking the central area is a room housing the Red Armour (RA) and one of 2 Lightning Guns (LG) and an area housing the Quad. The RA can be reached from the top of the map or via 2 wind tunnels accessible from the middle tier. A second SG is also to be found here. There is a corridor that passes through the top section of the map providing a direct route between the Quad and RA with several other corridors available that will either divert you through adjoining rooms or take you back to the central part of the map.

As you approach the Quad Area from the quickest path you will find a Rail Gun (RG) nestled into a corner. Another GL, SG, GA and LG are all within easy reach and not too far away at the top of this section a player will find another room housing a second RL and YA. A corridor leading out from the bottom of this section will take you to a dual teleport system that will transport players directly to the PG and onto the arena's mid-section or to the wind tunnels beneath the RA.

ProMode is not a campers game and green health bubbles and armour shards are used wisely to alert opponents to ambush attacks and to warn against players who may be camping at several key locations. CPM18 also comes with votable alternatives to the standard item configuration that see the Quad being replaced by the Battle Suit or the RG being replaced by the BFG (think cpm BFG!).

Swelt makes one more crucial item reconfiguration to PowaHaus, before becoming CPMA's lead game designer in September 2003, by replacing the floating 25'er with the MH and putting Invisibility where the MH used to be - and so cpm18i is born!

cpm18i is the version of PowaHaus Swelt eventually handed over to author Lunaran after the release of Lun3DM4 (Pull Up Your Socks) in October 2003. Lunaran states on his website that his brief was to retexture the map so that it looked good under both high (slow) and low (fast) graphic resolution settings and remain as close to the original in layout and gameplay as possible. The atmosphere created in this version through the interplay of light and shadow is simply amazing and the use of rusted metal border trim in contrast to the lighter shades of concrete provide clear definition of the map's geometry at higher picmip settings.

PowaHaus Redux looks fine in both dynamic and vertex light modes. People playing with high picmip settings will also notice and appreciate how easily recognisable the teleporters and jump pads are (a feature Swelt would use in other maps and conversions). Lunaran has also removed the excess ammo clips available for RL and LG, replacing some with SG ammo, meaning these two weapons no longer dominate the game quite as much. Item layout remains the same in both TDM and FFA. Bots will tend to follow each other along predictable paths in FFA but fair much better when used to beef up a side in TDM. However, do not expect wonders! Many strategies are available to teams. Movement through the top area can be controlled so as to slow your opponents game down, one team may establish control over RA and Quad leaving their opponents to the centre of the map or a team may completely shut down the other side by controlling the MH while shuttling between RA and Quad. And of course the Invisibility will support ambush and stealth attacks - if you can get at it! Forced errors are going to be a crucial element to gameplay for the down side!

And while a team controlling the RA have slightly easier access to the middle area for the weapons and items they are lacking in their base, the team that gains control over the Quad will always have an upper hand with easy access to all weapons (including PG via the teleporters) and both YA.

Lunaran filled his brief honourably with this retouch of cpm18i but for me the movement of the MH creates too much imbalance at the top of the map. On this basis I prefer the item configurations available in the original release for CPMA. 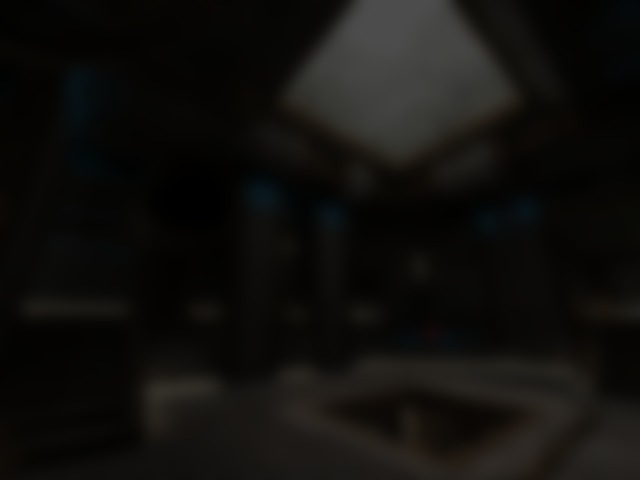