How does one write a review of an established map retrospectively, years after its initial release date? Where the traditional supports available to a writer (such as first impressions and personal opinion) no longer apply, the review becomes something of a historical document.

Challenge ProMode (CPM) was the brainchild of Richard "Hoony" Sandlant and the team at Challenge Network (back in 1999) with the aim of developing a Quake 3 modification that could be used at a professional level for competitive play.

Jens Bergensten (or Khaile as he was known at the time) was working on a modification for Quake 3 Arena (Q3A) called QWFix that would give Q3A a game flow more in keeping with that found in QuakeWorld. The mod was not without its problems but Khaile's commitment to the cause led him to join the CPM project as a programmer working primarily on the HUD. Khaile developed a number of test maps for the mod, including Realm Of Steel Rats, which is textured in base iD stock and would eventually be released as part of CPM's first map pack as cpm4.

Realm of Steel Rats is divided into 2 main areas adjacent one another, one housing the Red Armour (RA) and the other housing the Quad. Flanking these 2 areas are adjoining areas holding a Shot Gun (SG), Grenade Launcher (GL) and Rocket Launcher (RL). The top of the map on the RA side can be reached by a series of double jumps off light fixtures and a bounce pad by the RL and on the Quad side one can reach the RL from the GL below via a teleporter. There is also another teleporter situated in the far corner of the RA's RL side which takes players to a platform opposite to the room where the Quad spawns. Beneath the RA sits the levels only Lightning Gun and beneath the Quad sits 1 of 2 Yellow Armours (YA). The two main areas are connected at the near end by a walkway that runs along the top of the map and at the back by a network of corridors that will also give players access to a room housing the levels only plasma gun and the additional YA.

Realm of Steel Rats is playable both as FFA and Team Death Match (TDM) and will comfortably hold teams of 2-4 players a side (4-8 as FFA) but lacks Machine Gun (MG) ammo and the Green Armour type (which was to be introduced to CPMA at a later date). This makes the level playable in VQ3 even if the connections specific to ProMode physics are no longer available to a player. There will be enough items for players to grab, even with weapon and ammo drops disabled server-side, but expect to see more use from the gauntlet than normal due to the absence of MG ammo.

Gameplay will see teams taking control of either the Red Armour or Quad areas, and in the worst-case scenario dominating the map by controlling both these items. Given their close proximity and the maps connectivity this is easily possible but because of these features and the difference in respawn values will also mean that each item remains relatively up-for-grabs upon each respawn for well-matched sides. The levels item balance will see weaponry and health fall slightly in favour of the team controlling the RA, with access to the remaining YA's being favoured by the side controlling the Quad. Despite this balance, the team able to control the Quad and armours will carry the ultimate advantage seeing a vast difference in final scores by the end of a match.

Players familiar with the earlier days of Quake will recognise the RA set-up from the death match arena, The Abandoned Base, which this area appears to be loosely based upon. This basic plan also returns in the armour set-ups on Abandoned Rugs and can also be seen in Obi Wan's faithful conversion of the original. On offer here is mapper Swelt's cosmetic facelift of Khaile's original and aside from some restrained brushwork and the complete retexturing, the map remains basically unchanged in both item and layout.

Here Swelt has utilised mapper Lunaran's cpm18r (aka PowaHaus Redux) texture set to give this level a contemporary look in keeping with the grimy aesthetic popular at the time. Together with cpm18r (see the PowaHaus Redux review for more details), cpm4a was eventually released as an official ProMode map in 2005 as part of map pack 7.

Realm of Steel Rats counts amongst the most played ProMode TDM maps of all time. This is in part due to it being one of the first official TDM levels optimised for ProMode physics, making it a staple of competitive teamplay, but has just as much to do with the fact that it is a very well put together arena. Bot play is fine for those who can't muster together enough players for LAN but for those who would like the opportunity to enjoy this level with real players you can (for a price) go Pro on Quake Live and have access to a remake of Realm Of Steel Rats as part of QL's premium map selection. However, it's just not quite the same.

Download: Realm of Steel Rats by Khaile and swelt 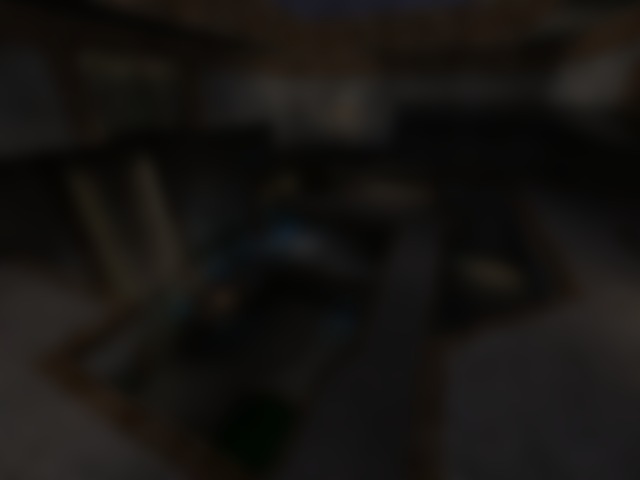