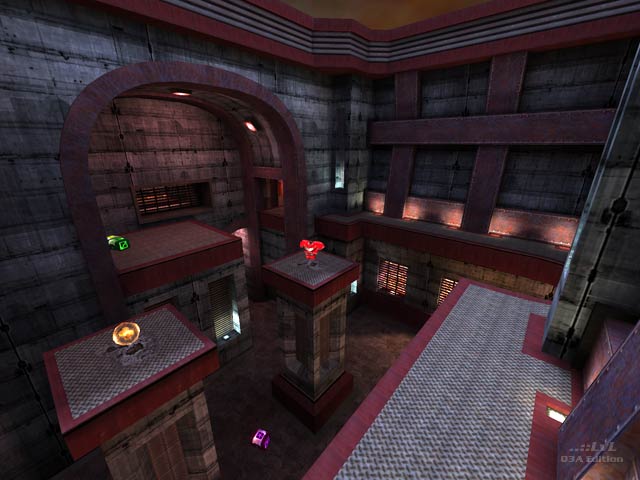 Epilogue is Teddy's third release for Quake III Arena and as with his previous releases was designed for Orange Smoothie Productions (OSP) with Team DeathMatch (TDM) in mind. It appears that the move to ProMode for competitive play meant this arena never saw the light of day as an official release in a map pack for OSP. Epilogue was originally released in August of 2003 to be made available in time for competitions that year.

The map and item layout remains the same for both FFA and TDM and features custom textures by Evil Lair, Sock, Senn, Randy Reddig and Kiltron. Epilogue consists of a series of 2-tiered rooms circling a central 3-tiered core that are linked by a network of corridors. These corridors while offering connection between adjoining areas on the map also serve the purpose of compartmentalising each area by funnelling the entrance and exit points between areas. You will find these corridors in game are often self-negating.

Quad spawns at the northern pole and the Rail Gun (RG) spawns in the Deep South with 1 of 2 Yellow Armours (YA) being found directly in the centre. Movement through the map's core will be made almost exclusively by dropping down with gameplay providing the occasional window of opportunity for a player to rocket jump back up. The only alternative to exiting the tank where the RG resides is by exiting via a teleporter which will take players out to a vulnerable corner in the top eastern corner, only a short distance away from the bustling centre via an entrance adjacent the Grenade Launcher (GL). There is also an opening in the floor here which will drop players down onto the map's only Plasma Gun (PG).

Powerful items are weighted in favour of the westerly side of the Northern Hemisphere with weapon, health and ammo to be found distributed mostly in the South. This will be the area teams will be seeking to establish and hold control over. The Eastern Hemisphere is noticeably sparse and deprived of wealth in comparison to its Western counterparts. Aside from the entrance adjacent the GL, all means of accessing the Quad on foot take place in the North Western corner but even this entrance can be monitored from the Red Armour (RA).

The pivotal point is the room holding 1 of 2 Rocket Launchers (RL) and Shot Guns (SG). Grated windows will allow players here to peer into the 2 adjoining areas holding the Mega Health (MH) and Lightning Gun (LG) to one side and the RA to the other. Once a team has perfected their migration through these areas, to capitalise on the available resources, their dominance will be hard to stop. Even the 2 teleporters shuttling between the 2 RLs will favour the team controlling this part of the map in their campaign to grab the Battle Suit (BS). The losing team will have to use all their skills to control the 2 YAs, the BS and RG in order to make a comeback but it is an uphill battle. So be warned!

In all respects the asymmetry crafted by Teddy into this arena reflects the geopolitical imbalances apparent in the world today. For this reason I will give credit to this map in being able to expose the nuts and bolts of humanity and it's injustices within the microcosm of the gaming world that is the Quake Universe. Players wishing to reflect upon the profound bonds that exist between resource, economy and inequity will find no better source than Epilogue. For players happy to suffice with the subtle shifts in balance created purely by spawning and the relative merits and skills found within the individual teams themselves I would suggest looking towards the more recent custom releases for TDM.

Because of its construction and gameplay, Epilogue comes highly recommended for play in VQ3. 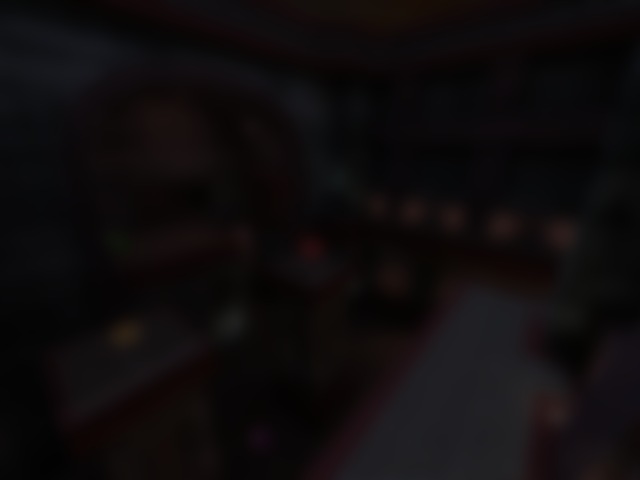