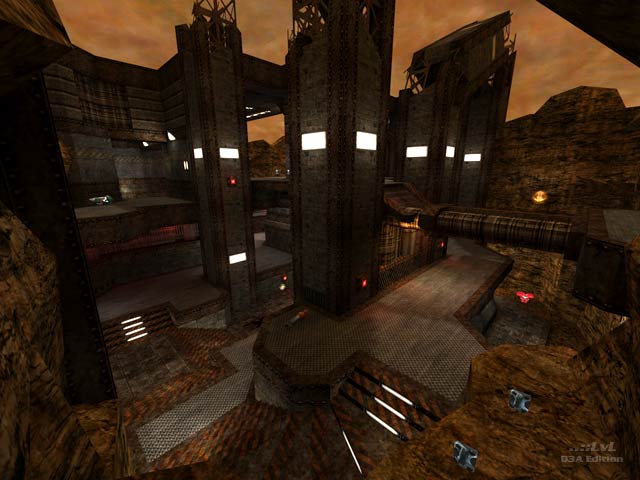 Wow! What an excellent map we have here. Lunaran once again pumps out a level that is both enjoyable to play and pleasing to the eye. The excellent brushwork combined with custom textures and a few ambient sounds really sets the levels atmosphere. The fallen tower and broken lights was a very nice touch. Specifically designed for CPMA play, the level offers up a mean game of Quake 3. While the author insists the level be played with CPMA, Vanilla Q3 is also fun. The gameplay is tight and aggressive, and the flow of the level is perfect. Tons of little trickjumps to heighten the gameplay are present. Bots played the level very well.

The Layout: The arena is roughly three-tiered. Massive columns rise out of the middle floor, supporting a mostly free-standing platform. Corrugated steel walkways snake around the outside edges, looking inward on irregular sunken platforms. Two jump pads offer quick access to the top level, and a few catwalks lead to small alcoves carved into the outer walls. It's extremely complex and varied, and should offer plenty of z-axis fighting as well as plenty of hide-and-go-seek. Connectivity is excellent, with no dead areas. It's also a nice mix of open and covered areas that should allow for several different styles of play.

Gameplay: 2RLs, 2SGs, 2GLs, 1LG, RA, YA, GA, MH (thankfully no RG). The weapons are all placed strategically: shotguns are in covered areas with several escape routes, giving the down player quick access to firepower; The RLs are on higher ground on diametrically opposite edges of the map, making it difficult to dominate both; etc. The MH and RA are both in somewhat vulnerable areas - easy to get to, harder to get out of - guaranteeing heavy firefights. All the teleporters are one-way, giving the careful listener ample opportunity to set up ambushes. The central 'high ground' is strategically important, but has too many blind spots and too few items to be a camp location. In other words, this map was play-tested thoroughly by an experienced group, and it shows.

ProMode: This map is a ProMode physics dream... if you can't double-jump off it, strafe-jump to it, fly around it, or otherwise find more than 3 ways to get from A to B, you're not trying hard enough. It should still play well in vanilla Q3A, but with the lack of air control, it'll be slow going in some places.

Download this map and put it in server rotation as soon as possible! 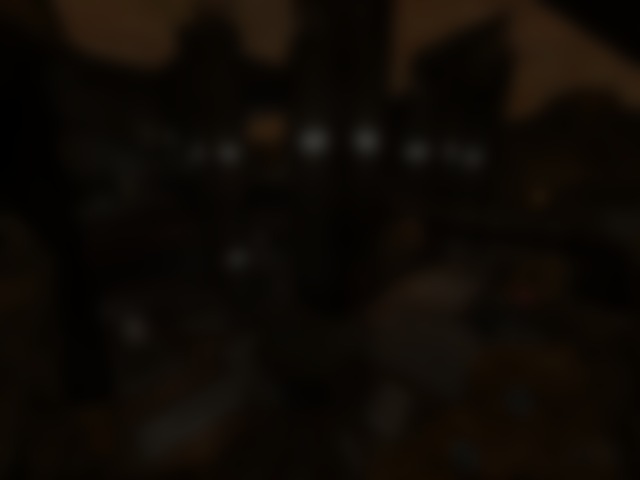