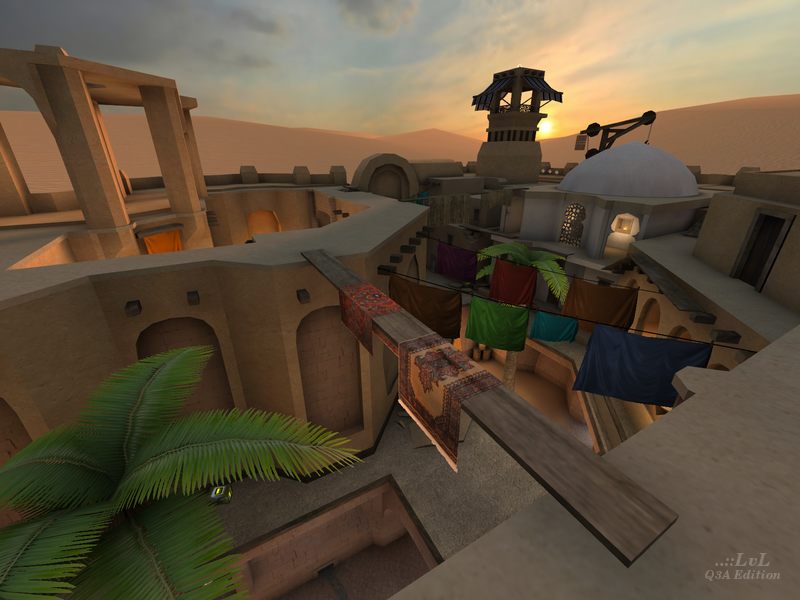 When I first opened this map, the first thing that came to my mind was "Prince of Persia". Jumping across the rooftops of Arabian adobes, you will find yourself immersed in a captivating middle-eastern atmosphere unlike anything you have ever laid eyes upon in Quake III. Unfortunately, there are a few gameplay-related flaws that do hurt this map's potential, but nevertheless it is absolutely worthy of your attention, read on.

As mentioned, the setting is a small Arabian town, and the theme is executed well throughout. Palm trees, clothes hanging on thin ropes, rugs, and pottery add the finishing touches, and surrounding the entire playing area is a seemingly endless desert, which, with close examination, one will find out it is not from help of a skybox but by using brushes / curves in an interesting fashion. I would highly suggest that the author shares his methods on how he went about creating the sand surrounding the map, this could be of great interest to other level designers.

There are a few contrasts with the middle-eastern theme in this map. I am led to believe that this probably takes place in the future - the architecture is the same clay and stone buildings that have been in use for centuries but clearly there are very high-tech influences, such as a few slipgates, one of which is blocked off and supposedly leads back out to the desert, the other allowing one to reach the railgun on the highest tower of the map.

The layout is difficult to describe due to it's freeform, haphazard style, but let me just say that it will take you a while to adjust to this map's complex geometry. It is certainly not for beginners. The gameplay, while good for the most part, is hindered in significant ways. The most notable is the RG spawning at the high tower in the map. It is very easy to pick people off by camping up here. Not to mention one can crouch and look down below the glowing blue surface, which can be shot through. Players can come up and you can block them by moving over to where they will pop out, and give them a load of buckshot with your handy SG. It's a handy way to get a few easy frags, but players will throw expletives at you and ragequits could follow because of a single camper ruining the game. I personally think it would have greatly benefited the gameplay had the author found another means of getting up to the tower, and perhaps even leaving the RG out altogether. Even when not having to worry about campers, the detailed architecture can be very distracting and you will often be killed and not even realize where that one shot came from. I highly recommend that anyone downloading this map play it in ProMode and enable brightskins.

Despite its large, open nature the author personally recommends playing it in small FFA's of up to three players, or as a Tourney / 2v2 TDM. It could also function well as a Clan Arena map, though starting off with a railgun upon spawning could definitely put people off. He says any more than 4 players will be very frustrating and I concur with this observation, which is why the suggested player count for the map is so low for this review.

My favorite feature in this map was the wind tunnel that zips you straight to the red armor. The sands appear to be flying right into it which is a nice visual touch, and the clipping inside the tunnel has been carefully adjusted so that the player does not get caught on anything during his or her travel.

Bots play pretty well. They navigate the advanced layout with ease and I even found them walking along the thin clotheslines.

In terms of eye-candy, this map comes highly recommended and you should start downloading right now. However, do not expect it to be an absolute keeper if you are more focused on gameplay. It will make for some fun matches but won't quite reach the competitive level that some of the more hardcore gamers desire.

Tigs notes: A quick shot at the blue orb above the tower will squash the camper at the RG tower.

Update 2: DaEngineer has made even more improvements to this map than can be listed here, and re-released the level. The download is now for Shibam v1.3 and is well worth updating if you already have the map. For a full list of changes, see DaEngineer's personal website. (25th Sept, 2011) 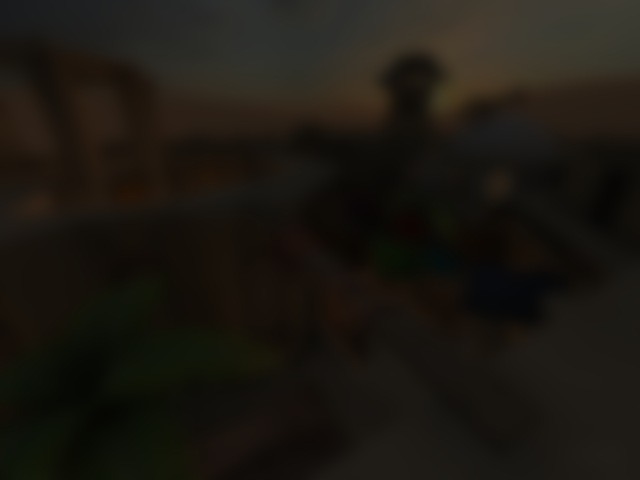