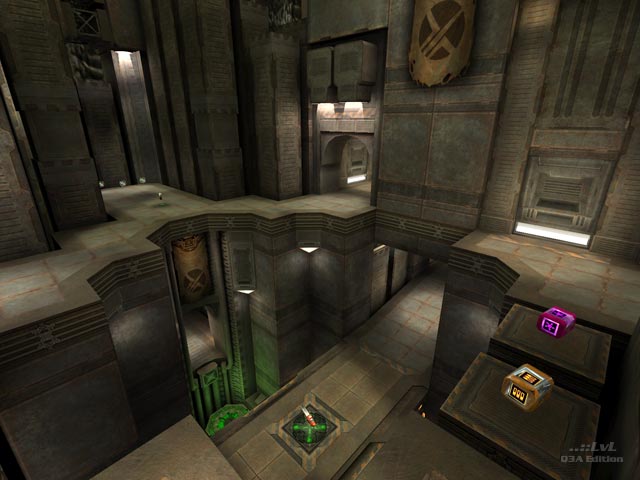 Iron Hive is a mid-sized FFA map, somewhat reminiscent of Space Chamber (q3dm18), by being a large, pillared structure floating in a void. It boasts a coherent and rather detailed visual theme with dominant gray and green color tones. The graphics are the strongest feature of the map - even the bottom parts of the level that can be seen only when falling - are nicely modeled and textured. Also the triangular lamps are a very tasteful addition. The Gigeresque background texture gives the map an epic feeling, reminding me of some Oddworld landscapes. On the other hand, the repeating pattern is a bit vertigo-inducing and sometimes makes enemies hard to see.

The player must watch his step all the time here with the void being an ever-present threat, although some finely tuned jumps can help to move about quite a bit. All weapons are present except the Lightning Gun and BFG. There are no powerups. The author attempted to make the areas around the main items geometrically interesting, but with mixed results. While the elevator pillars near Megahealth are a fine idea, they produce texture glitches in both VQ3 and CPMA. Red Armor room is a focus in the map with some interesting vertical combat possibilities, but the holes in the ground end many fights prematurely. A two-way teleport provides connection between the RA and the top of the map. An out of the way 50h platform is a nice touch.

Gameplay is ok for three and more players, yet becomes stale after a while, thanks to a semi-symmetrical layout and many right angle turns. With so many long corridors and jumppads, the railgun can become a dominant weapon even despite its dangerous location. The design is not competitive enough for thrilling duels or TDM. Bots play alright, but move around somewhat predictably and are pretty easy to outsmart.

You can try this one for a few FFA rounds, but I doubt it will end up as an evergreen, despite its toxic atmosphere. 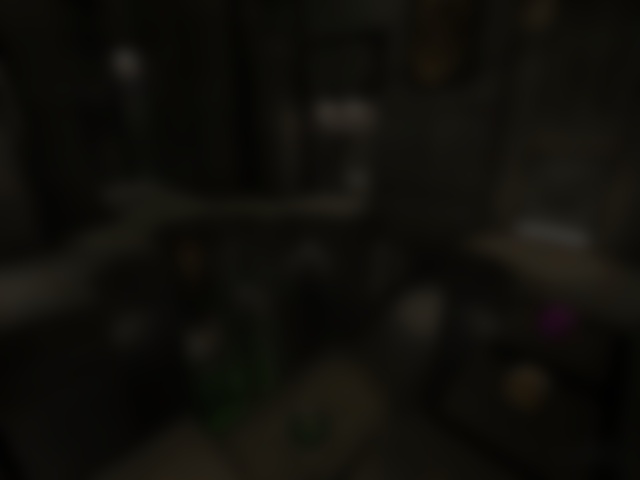