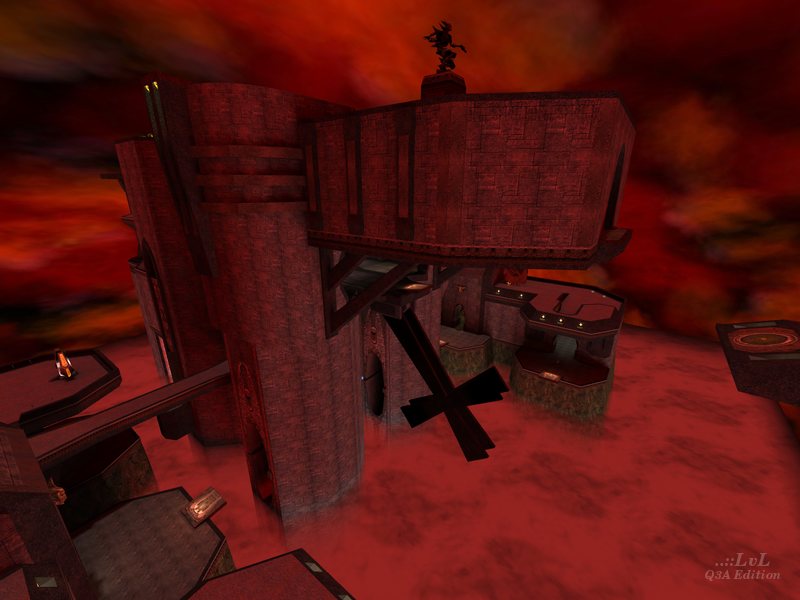 Agree (0) or Disagree (0)
deqer unregistered
#29   27 Nov 2010
jeez, the screenshot of this map looks amazing. such a wonderful feel is present in the screenshot. almost like a dead, yet alive, demonic-themed, twilight zone, where it is clear that you should mind your surroundings and to be careful as you travel through this map. there are no sudden surprise holes or lava pits because you already know this whole level is a pit! play it carefully, thus playing it skillfully!
Agree (0) or Disagree (0)

an interesting map. Perhaps a proper sky box would have been a better choice than the layered cloud shader (cloud shaders all end at the bottom of the environment cube). The overall vertical visibility of this map reveals far too much distortion in the clouds anyway.

The inclusion of the flight powerup is a cool choice in terms of play, but allows the player to see all the caulking textures under the floor. Clip brushes would have prevented

The steel ribs on the side of the structure are flagged as non-solid in their shader and should have been fully clipped or swapped with the solid version of the texture. I tried to hide on these and fell right through. This is not an aesthetic problem, but rather a play issue and therefor more serious. These brushes also hide weapon hits, which is visually confusing.

The performance is reasonable on my machine and so I will not complain about that, but I do think a there could have been a few more optimizations. the swirling mist

Agree (0) or Disagree (0)
TimTim unregistered
#23   19 Dec 2000
Hey, I was kinda dissapointed with this map at first, but then I played it in Requiem, a mod with a grapple, and it was excellent!

I did have some frame drops in places, but nothing nearly as severe as some of you folks are describing...

-5 for the, sorry, impossible architecture. It looks impressive, yeah, but it has really no function just decreasing FPS to hell and making it unplayeble. Also its to focussed on vertical action (opponents are often under or above you) and the distances are just way to big. Im not getting comfortable with this map - its, errr, I cant explain. It looks great but thats all. So I give 5 Points for the hard work.

not much else to say that hasnt been said below. :-)

these are the maps other mappers take little pieces from ,with or without knowing it

this in itself makes it a worthy contribution ,I love "different" its shakes things up a bit :-)

Loyd morris would be proud :-p

9/10 for the ideas and the balls to throw it out there.

Agree (1) or Disagree (0)
cranberry unregistered
#19   17 Dec 2000
I gave it a 9 although (and because) the map is unplayeble on my machine (yet) just because of its awesome architecture. I think this is the look of future maps.

This map kicks imho all other 'eyecandy focussed' maps Ive ever seen. What a work... unbelievable. There are hundreds of nice and well made custom maps but this one belongs to such maps which break through the 'quakish' style and creates their own. Therefore I love it.

Like I said below, I'm averaging 30fps on my 950/GeForce-GTS. That's pretty scary.

When I map, I set limits for myself. On my 400, if it drops below 30fps, there better be a GOOD reason and not often, otherwise people won't be able to play it on "normal" machines.

I look forward to your next map Immortal.

Agree (0) or Disagree (0)
IMMORTAL unregistered
#17   16 Dec 2000
If you read all the replies then i think you understood what i said , if yes then you will be agree with me , this map don't rate 0/10 and the guy who gave that rank is lame and stupid and i repeat it , no matter for the results

Thx for your comments Finch .

I fact , there was no studies of the map before I built it , I just had a general idea and if I had to do it again , some stuff would change for sure .

For exemple , I would completely delete one of the lateral towers

The outside area is a kind of RL vs rail area , let talk about the gameplay , most of the time people are in this outside area , and frag frag frag , they move from there when they want to be more powerfull and win some items

A guy taliking the flight item makes the battle generally move from upstairs to downstairs , depending of the way the people play .

For naturally having played to it I ensure that despite of my poor Voodoo Banshee , FPS are not often under 20 (I accept , it's unacceptable ) but it stays playable , I believe that the q3 players generally have a better graph card than mine .

Hmm anyway , the map I work on now won't have sutch problems :)

Agree (0) or Disagree (0)
not yet set unregistered
#16   16 Dec 2000
Awesome. Love it.
Agree (0) or Disagree (0)
Scout Finch unregistered
#15   16 Dec 2000
There are some good ideas going on here. You can cut the atmosphere with a knife and serve it alongside a big glass of milk. I understand you put a tremendous amount of work into the map, but you ignored some critical mapping fundamentals. You can put all the effort into decking a map out as you want, however if you have such an eyesore as the HOM that is present in this level, it will come off as being amateurish no matter what. Especially with the insane r_speeds.

The outside area is nice, but really how functional is it? Does it serve any purpose in terms of gameplay or does it just kill your triangle count, and present the biggest flaw technically speaking. If you were deadset on including that enormous outside area you could of at least found a way to correct the sky HOM bug. A huge outer perimeter wall towards the bottom, or maybe use a skybox behind those cloud layers. Both suggestions aren't complete solutions to the problems posed, and would probably butcher the framerate further. However it doesn't really matter how many times you beat something after it's already dead, as the framerate in this map is. This map is purely a concept, walk around in awe type affair. If you're going to totally abandon gameply for something like this, at least make sure you don't have any really nasty bugs.

And what point I ask you is there in insulting the people who have bothered to download and comment on your map. I assure you your conduct here will certainly turn people off from downloading and commenting on future maps from you. Because they know disagreeing with you means an insult because you put so much 'work' into your map. Grow up.

Sure, it has loads to be improved technically speaking, but the fun factor is surely there...Some great ideas worked out in this level.

Agree (0) or Disagree (0)
Friction unregistered
#12   15 Dec 2000
Verts arent all. You have to take all shader passes into consideration too. With that much of sky and fog visible its not really strange that your FPS pummel through the floor. Vert amount and FPS don't often correlate when the map is shader-heavy. (t4!)
Agree (0) or Disagree (0)
Twitchfactor unregistered
#11   15 Dec 2000
The most I could get in one scene is 22,000 verts. That NVidia level had 54,000 verts and only brought my machine down to 50fps.

I'm really leaning towards the "hole in your map" theory.

After flying around it, it looks like to me that you've got the fog extending past your "hull" on the bottom. Fog is a "Non-Solid". When the engine goes to calculate VISability, it will shoot a line out through the fog and straight into "nowheresville". After a while, QMap will give up and just not dump excess polygons, nor VIS (which is to set-up descrete zones/sections of polygons to draw).

Seal the fog at the bottom and you'll probably be okay.

Class is now over, you may return to your regularly scheduled mapping. ;)

(PS: Hey Peej, that's how you give "Constructive Feedback", dickhead)

There are some very good parts in it, but I think the author needs to practice his craft a bit more.

There's more to building a great level than great building.

There's flow: the ease of movement for the characters).

And the most important that's been broken in this case: mass-market.

There's not THAT MUCH going on here. I suspect there's a hole in this level, and that it hasn't been VIS'd properly.

Also, the hall-of-mirrors(HOM) at the bottom isn't really a "Q3A bug".

I think (and this is just my opinion) you should loose the sky, relight the level manualy (by placing big-red-lights if it makes you happy) and fix the hole. It'll be a much better map and people will be able to appreciate your work (especially people who don't have monster-machines like I do).

only one problem, i seem to be missing a texture, the sky is pure white?

thoose who scroes low for fun and thoose who take care of scores... immortal.. do you like youre map.. yes.. then do you the favour and post a thread in the editing section of the q3w forum..

and hej who cares what they vote.. if the map is good no on cares what guys at lvl voted it.. everyone knows that voting here is bs.. cause lot of guys reconnect and vote again and again and again.. only to give a map a very high or very low result.. :)

thoose who scroes low for fun and thoose who take care of scores... immortal.. do you like youre map.. yes.. then do you the favour and post a thread in the editing section of the q3w forum..

and hej who cares what they vote.. if the map is good no on cares what guys at lvl voted it.. everyone knows that voting here is bs.. cause lot of guys reconnect and vote again and again and again.. only to give a map a very high or very low result.. :)

What a lame * , i worked 2 months on that map for these kind of reactions

Wall of mirrors isn't the only thing you can see when you look down , you have to flight hight to begin to see it

I used blacksky as soon as the fog begin , it reduced the hall of mirors to the maximum

If you wanna send feedbacks on my future maps please email me at immortal_667@hotmail.com

And please don't use transparent textures on the lower floors when somebody can fly under them with the fly powerup. I couldn't see where the opening was, and died!

Make a few changes (THE SKY!!!), recompile, and people will play it... 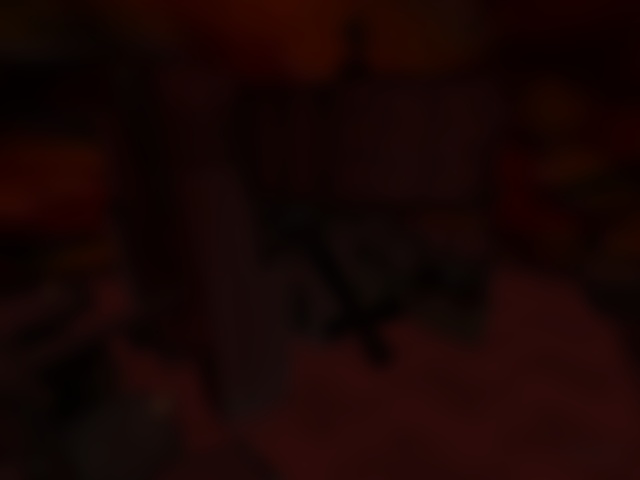