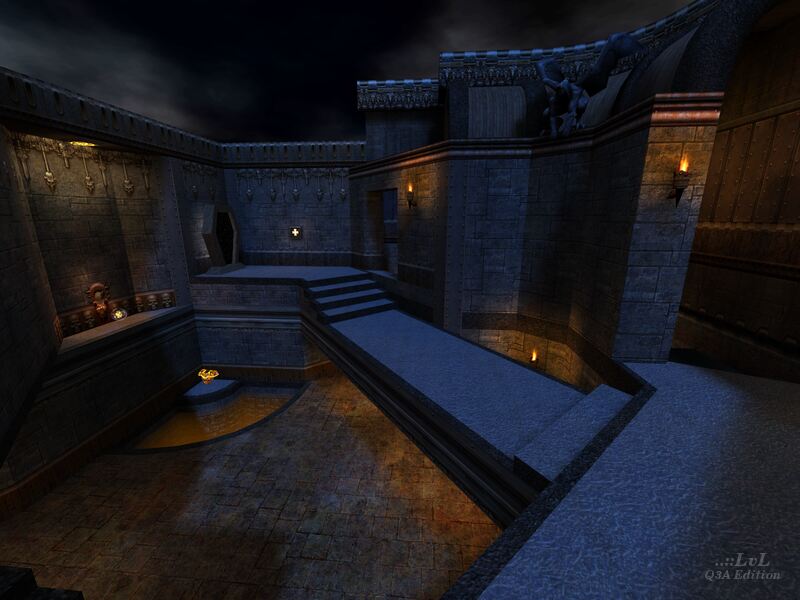 Atrocity Exhibition is a team effort between Decker and DruZli, both having solid experience with CPMA level design. Druzli had previously collaborated with xfoo to design Tribute to n1*dK, and Decker helped out with the Wicked remake as well as creating Use of Weapons. All three of these maps would later find their way into the official CPMA mappack. With credentials like these, fans of the mod should expect a finely-tuned competitive experience.

The textures are stock Quake 3 gothic, but bathed in a moody blue nighttime glow that blends in well with the warm flames of the torches and the soft off-white glow of the light fixtures. Like many CPMA maps, it isn't going to be winning any awards for visual presentation anytime soon, but it certainly is not dreadful either; it does the job and does it well. My only visual nitpick would be that the sky could have been dark blue as well to match with the lighting better, instead of being grayscale.

Gameplay is nonstop action all the way through, with two open atriums connected by a plethora of passageways on various floors, along with a two-way teleportation system, of which the lower one is double-sided so you can approach it from both directions, which is a nice touch.

The map has only four weapons, forgoing both the PG and the RG. I found the LG to be the best weapon due to the map's openness in the atrium's and the paths players have to take within them, along with the tight jump pad chutes that leave players like sitting (or more like flying) ducks just waiting to be blasted away with a million volts. The map's major items of contention include a MH and a YA, as well as a GA in CPMA.

If there is one issue I have with the gameplay it's the fog pit next to the YA - the out of control player is usually the one trying to get this armor (and the GA, too) so they can have a fighting chance against whoever has the MH, and it's already in a pretty dangerous spot, being in a low area against a corner. I don't think it needs an instant-death pit on top of all of that, although I'd be fine with lava (Joel's competitive level design guide makes a comment on why voids should generally be avoided in duel maps). Then again, some might like how punishing this map is to players who lose control.

As usual for a CPMA release you can expect some trick jumps. Some of the more notable ones include a tricky stair jump from the high teleporter walkway to the MH platform, which avoids the need to enter from the jump pad tunnel or the side passageway. The aforementioned teleporter, when going from high to low, provides a teleporter boost upon a jump that gives you just enough height to land where the GA sits, though you'll jump right over the RL too if you do this so just keep that in mind.

Far from an atrocity, this map is worthy of exhibition in your CPMA collection. 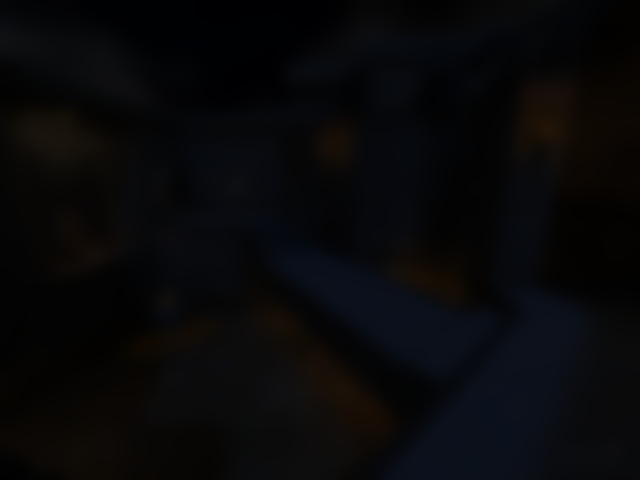