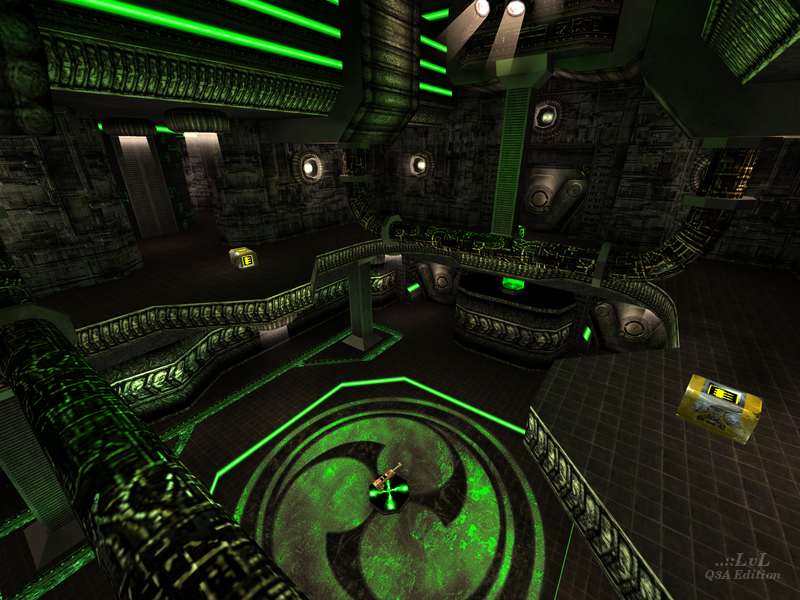 The best part of this remake is the BFG. No wait, seriously; hear me out.

Before I talk about the BFG, let's talk about Alien. This Alien-inspired map (that is, the movie; Alien), is actually a re-textured, re-designed version of Brimstone Abbey (q3dm8).

To all up-and-coming map makers, this is how you do a remake. The green and black textures and lighting definitely give off an Alien vibe. The green lights in some areas that slowly fade between on and off are a nice touch. The layout of Alien is different enough from Q3DM8 to offer a new experience, yet familiar enough that you won't be too lost.

The old cathedral where the Quad and Invisibility powerups were is probably the most reworked area. Where the PG spawned, now sits the RG and no longer does the bounce pad shunt you over to the other side. Remember the raised areas only at the sides, where you could find the GL and some RG ammo? Those have now been extended to go all the way around the perimeter of the room with another door added, which leads to the central room with the RL and a hallway on the other side. The graphic on the floor is a nice touch.

The room with the drowning pool has also received a rework. A tunnel now goes from the floor of where the RG used to be, down into the pool itself with the powerups (the Quad, and the Battle Suit) found in the tunnel and a second hallway has been added on the same level as the old RG platform, but on the other side where the PG is visible.

The GL has taken the RG's place atop the platform overlooking the pool with the YA now at the bottom of the pool. A small platform has been added to the pool which sits at just above surface level. Useful for transitioning from one area to another without the water slowing you down. The Medkit has been placed up high - requiring you rocket jump up to it.

The "central" area where the RL used to be, and still is, has received an... interesting addition - as well as some changes. The area that the bounce pad takes you up to is where the RA is now located. In the center of the room is a spinning circular thing in the floor. In the center of the spinning thing is a slightly glowing orb which teleports you. When teleported you free fall in a tunnel with the BFG residing at the bottom of the tunnel. You will have to air-strafe to pick it up before the floor of the tunnel shunts you back into the central room. (I would have preferred to see the floor of said tunnel shunt you into a different room to discourage repeatedly going after the BFG - a minor gripe.) The catch? The edges of the circular spinning thing can kill you pretty much instantly. You will have to carefully jump into the center which may be difficult to do while under fire.

Using the BFG in this map can be risky in many places, what with there being many small enclosed spaces and corridors. The LG, SG, as well as the MH, can be found in the various halls and corridors.

In the readme, the author actually stated that he was not happy with the proximity of the MH and the RA but said that he "needed to do this so the bots would flow well as possible". If I may be honest, I encountered no problems whatsoever with their proximity.

Overall, the new changes and item placement are very well done. The suggestion of a player load of 8 felt a little much. This map, while being intended for FFA, works fabulously as an excellent Tourney map. Bots play without issue and go after every item. Except the BFG of course. The only issue I had was with a missing texture at the very top of the rooms with the drowning pool, RG, and BFG teleporter. It looks like the entire skybox is a missing texture. However, I am unsure if this is a map issue or an issue of my own.

It's nice to see a remake of a map where the addition of the BFG is done in such a way that it doesn't hurt the overall gameplay and it is certainly a fresh change. Definitely a keeper.

Patch file: Thanks to Mapsking for putting together a patch file that will fix the missing textures on a few models in this release. 22nd Jun, 2020. 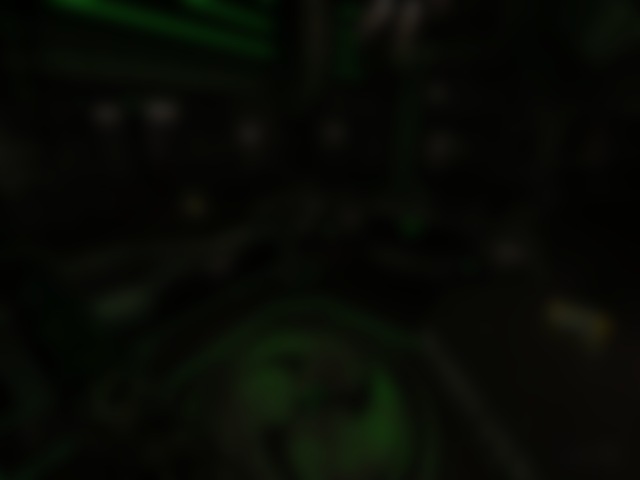