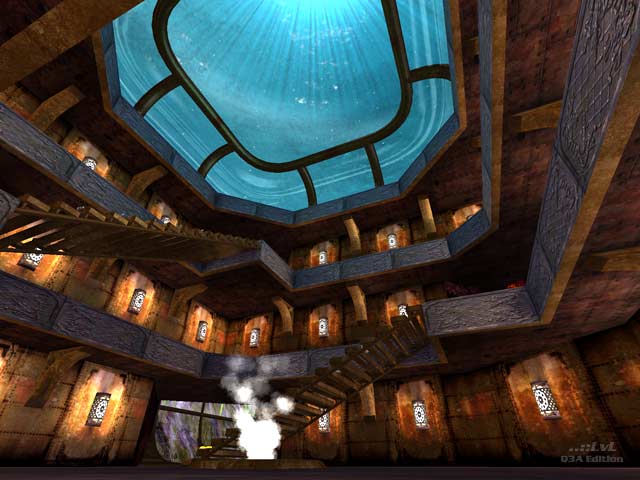 You are transported to an antiquated underwater facility. Breathtaking ocean scenery such as rolling sand hills, coral, seaweed, and even moving fish surround the playing area making for an extremely atmospheric map. The sun shines brilliantly over the fiberglass roofs, and paintings hang on the walls of some of the hallways in the map.

Accompanied by the stunning visuals however are several issues that take away from the "wow" factor this map might have had. The first and most pressing matter is that the construction of this map literally pushes the Quake III engine beyond it's limits - when I opened it up I received several missing shader warnings, causing my HUD to disappear (and be replaced with the ever-so-infamous "holodeck" texture) along with some weapon skins. See Tig's notes below.

As you can imagine, the map also tends to run sluggishly, with r_speeds that reach for the sky - and this is just walking around in it by yourself! There is no bot file, but I imagine that if there were, even a simple duel would be as slow as molasses. There are two things that contribute to the poor performance of the map - first, the entire map is repeatedly drawn all the time (no vis-blocking) because it is essentially placed inside a box to allow for the placement of the underwater scenery. Secondly, and also responsible for the missing shader issues mentioned previously; is the overabundance of shaders used in the map. Shaders are used for the walls, the trims, the windows, the scenery... the author could have benefited from remembering this simple but important phrase from the Quake III shader manual: "Power has a price".

The layout is not quite as inspiring as the graphics. The map is composed of three stories, forming a hub around the center where two flights of stairs allow for travel between the floors, as well as a jump pad for faster access. Branching out from the central area are two large, mostly identical rooms; save a few differences such as item placement and the position of the teleporters. A grenade launcher can be located on one side of the map, with the shotgun on the other. Connecting the hub and the two rooms are two sets of stairway corridors with the rocket launcher found on one flight and the plasma gun on the other. Two yellow armors are found on the first and third floors on opposite sides from each other. Because of the open nature of the map, the plasma gun will most likely be the dominant weapon. Lobbing grenades will be a useful tactic in the stairway corridors, or up from above on the higher floors of the map. Rockets and shotgun will probably see less use.

All in all, you can tell the author has put loads of effort into building this map, but unfortunately, due to the above mentioned problems, it will probably not last long on many people's hard drives. The map would have been better had Wakey used significantly less shaders, and built a layout that is not quite so bland and symmetrical. If you have a reasonably decent machine and want to check out the interesting graphics, go ahead and download. Players looking for another map with a similar atmosphere may want to check out Kaz's Lost At Sea, which also exceeds in visuals, whilst having better gameplay, layout, performance, no missing shader issues, and a bot file included.

Tigs notes: Only a few minor shader issues were experienced when testing and taking screenshots, however there are a number of shader files included in the PK3 that are not needed or should have been edit and renamed for this map. There is a chance that one of those shader files has conflicted with another on EmeraldTigers set-up.

Wakey's third release and it is an Outpost under the ocean with windows to see the sea-life and everything else underwater. With rusted walls, and water drops leaking through the ceiling, it is obvious that this base has been abandoned.

As for the gameplay, I was unable to test it with bots because there are not any to play - no bot file has been included. See below for a bot file patch. Adding weapons to the map was a good idea, and according to the architecture of the map, steaming geysers act as the bounce pads. The teleporters are powered by generators behind them. Classic.

The map is very focused on the scenery just like his other two maps. I'm sorry I am unable to mention what gameplay with a human player is like because I was unable to LAN it with anyone.

Interesting architecture and well placed items to make the fun last. A keeper to those who like Underwater themes.

Bot file patch: Colton has made two bot file patches that correct the bot issue on this map. Highly recommended that people download the patch as well as the map. 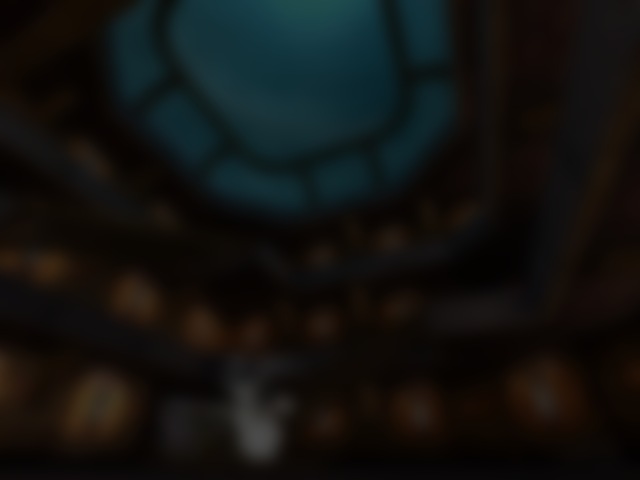