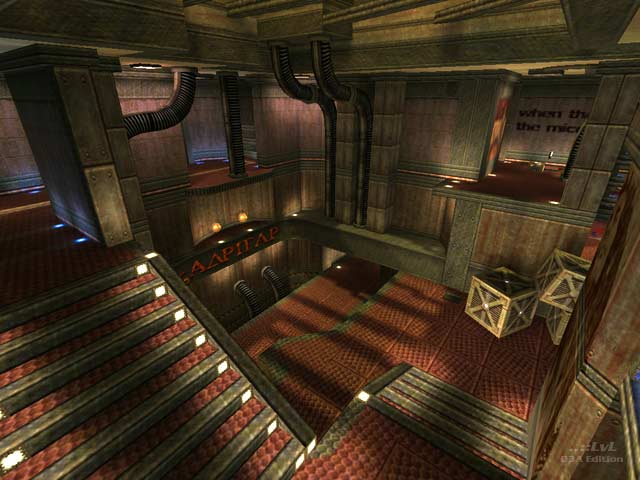 Rat Race is a tourney by headrot optimised for play in Promode and outfitted in ikbase textures. Arena file and bot support are included in this package.

What is immediately apparent when entering this author's levels is how visually striking they are and here headrot demonstrates an obvious creative flair taking, in this instance, a familiar texture set and painting it in an entirely new and unexpected light. But as a caution to mappers I will say that while the visual appears to the one who looks the form moves the one who feels. Movement has an aesthetic that is deserving of the gift of beauty.

Also featured is political graffiti stencilled on the walls - a couple of the late Bob Marley himself, as well as passages from his song Rat Race. Unfortunately, freedom also means the freedom to oppress and I feel somewhat of a hypocrite on the human rights front while playing a game that glorifies competition and violence. Does propaganda sit well in the Quake3 environment? - on this matter the jury is still out - but there is no doubting its appropriateness when viewed in a purely thematic light.

The overall feel of the map reminds me of a detention centre which brings me to the subject of fighting as resistance; so we should keep in mind it is no coincidence when propaganda surfaces on a map. The political irony is driven home when headrot warns Beware Vadrigar! - a call to arms for the arena gladiator who must come to terms with the fact that the powers that send us to war are the powers we must actually fight.

I must also give some consideration to the bot play on this map as I was critical of this element in the author's previous work and he was humble and thoughtful enough to take this into account. As far as our artificial companions are concerned headrot has made marked improvements with respect to their use of the map and has adjusted spawn locations so the bots will take some otherwise difficult items to pick up (the rail gun most notably). They tend to get stuck at the shotgun and on the moving platform. Credit goes where credit is deserved and considering the complexity of headrot's maps I don't see these glitches as being any real flaw. Looking back at CPMA's and id's base map stock shows us that the maps that humans enjoy and bots play well on are the maps that don't try and do too much. Now to the crucial element - gameplay and level design.

Rat Race offers 3 main areas all well connected with a two-way teleport system providing additional access between the Mickey's ears of the map. The upper and lower elements to the rail gun area are perfectly levelled out by a bouncepad and an internally set teleporter, and if headrot's accompanying tricking diagram is anything to go by I don't think he fully realises yet just how much coverage these 2 features give a player.

There are a number of features peculiar to this map which also deserve a mention. There are several pitfalls in the form of lava pools; the Rail Gun is booby-trapped by a shootable button which will see a player being pushed into the lava below; and the red armour (which is the only armour, excepting shards) is held captive within a wall of horizontal bars (which sadly can't be shot through), also opened by buttons. While there are no hard and fast rules regarding their use I am going to side with conventional tourney wisdom and suggest the author at least consider the inclusion of mega health and yellow armour for future tourney maps, removing the button-triggered features and in the case of the lava pits in front of the shotgun and in the passage over to the rocket launcher, making them shallow enough to be gotten out of. While these features are fine in a free for all they can be frustrating in a tourney. Tourney play is still recommended.

To conclude I am going to contradict myself again by saying that when all is said and done these features give to a map it's own unique flavour and it is our responsibility and duty as players to embrace the challenges and rewards a mapmaker gives to us in honour of their generosity. 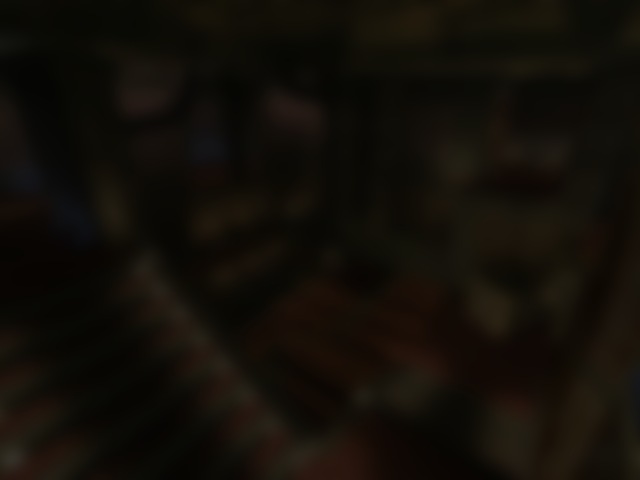