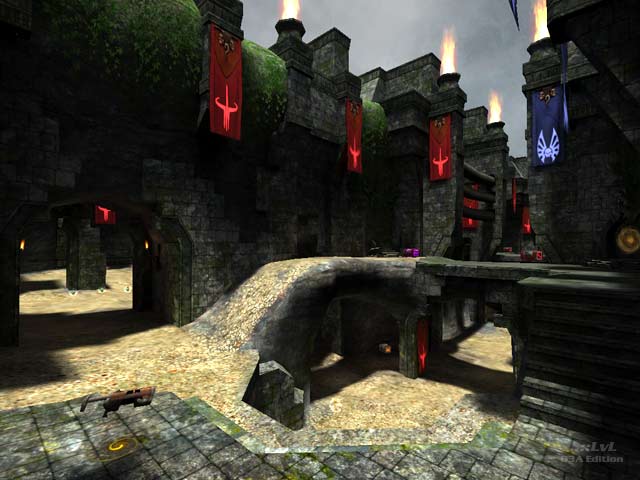 This map is setup for CTF with the concept of wide open flag rooms. This change allows the match to be less defensive and more offensive and intense. The map structure was borrowed with permission from Nikolai 'Mr.Lake' Mohilchock's map, Evil Gemini CTF. Having never seen Evil Gemini CTF, I have no bias towards this one being built off of another map.

The author included a full sound pk3 and an empty sound pk3 that you include in your baseq3 folder should you decide you want the extra ambient sounds or not. Personally, I had no problem with the ambient sounds and they even added something to the sound track that the author picked for the map, which is very unique.

The theme is set in an ancient temple where time and nature have worn away the stone and plants have grown well into many walls around the map. The flag rooms being right next to each other, one would think it would just be a rocket jump match, but the author is very clever in how it is setup. The ledges and jumps are just high enough that even the most skilled rocket jumper will not be able to simply go from one room to the next for an easy capture.

There are many routes to take between each base and it is never too far to find the enemy flag carrier on the map. Between teleporters and jumpads, you should have no problem keeping everything moving along very fast. The map flow is very fluid, you do not get stuck anywhere and the textures all mesh together quite nice.

The map has bot support, but the bots are just plain stupid on this map. When playing with bots, you can run into their base, grab the flag and just jump right off the ledge, but they will not. They take the long way around to chase you. So it is very easy to score capture after capture against the bots. The bots also seem to avoid the jump pads and teleporters like the plaque. Instead, they take nearly the longest two routes around the map, making them very predictable.

The poly-count on this map is, in my opinion, much higher than it should be. The author acknowledges this in the readme file, tried his best with hint brushes and compiles. When I load the map up, standing at the far edge can generate 30K+ triangles. I did a quick tris mode and well, it is a lot of detail, but I finally figured out that the author has an invisible ceiling above, so you can't rocket jump very high out of the map. In noclip mode, I was able to see that a lot of the maps renders when no player will ever be able to see it. My tweak to this map would have been to caulk all the unseen areas to decrease the triangle count above. Every little bit helps and this map needs it if you are going to have other players running around as even a modern PC will chug at 27 FPS in some areas before any players even arrive in the map.

Overall, I like the CTF concept and play of the map, I like the ancient temple theme; I just wish it had some more tweaking done to help framerate and to give some more intelligence to the bots.

Tigs notes: Public Execution by Ricochet is another CTF map where the flag rooms are visible to each other. There may be more, but I can not remember them. 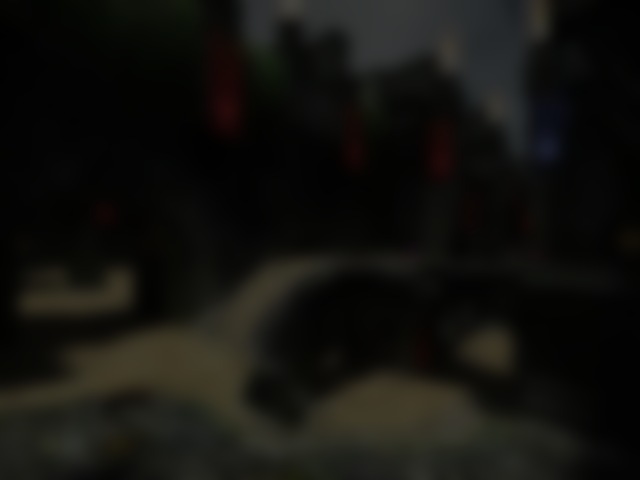