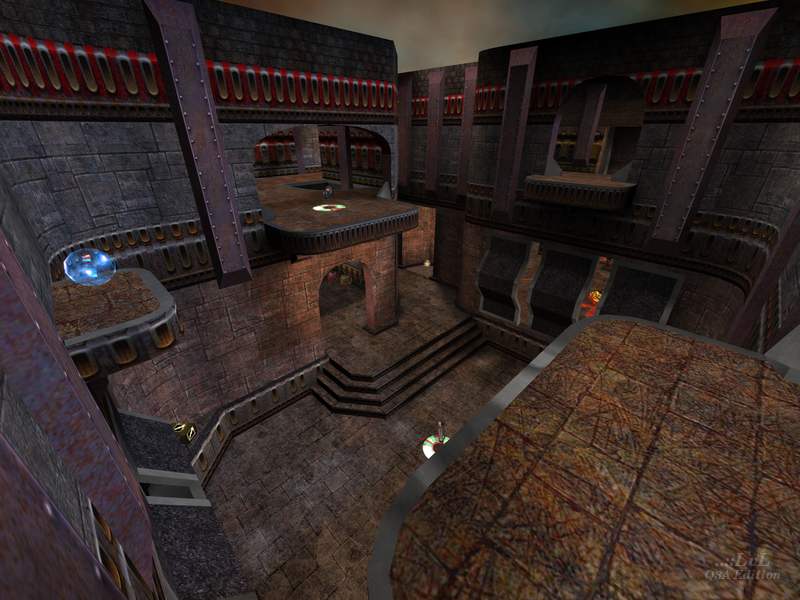 This is a largish tourney map decked out in id Gothic. It looks average, with no glaring construction errors, but no caulking behind some curves, which may cause visual glitches on poorer hardware. The map will chug on such hardware as the polygon counts get into the 20K range in some places; the engine draws nearly the whole map from everywhere. The map was "vis"ed, but no hint brushes seem to have been used. More doors combined with areaportals in the doors might help in tournament mode, though not so much in FFA play where many of the doors will be open at any given time.

One interesting thing is the use of shiny metal trims and in a couple of places whole walls of the stuff. The spawn markers for weapons are also unique, but may be slightly out of place; they may have been better in a tech map, and bloodstain decals or similar better here.

The layout is basically a ring of chambers around a central atrium, with two floors except in the central atrium (which bears shotgun and megahealth) and the red armor atrium; the atria have ledges at the upper level without no continuous flooring. Connectivity between levels comes from several jump pads and teles, dropping down (which causes falling damage in most places, save the "chutes" by the yellow armor), and one single lonely switchback staircase.

The ring on the lower level is complete; on the upper level it is interrupted by walls with the rocket launcher room on one side and by the gappy floor in the red armor atrium, though this can be traversed by clever jumping, more easily in one direction than the other, or by dropping down and using a jump pad; the red armor is flanked by two of them, which together lead to both major sections of the top level.

Despite the name, gameplay is average, perhaps a little better. Tourney play, for which the map is clearly intended, is a bit hunt-and-seekish in this sizable map; this may or may not be to your taste. There is perhaps a bit too much ammo for tournament, plus two of some of the weapons, notably the lightning gun. The only weapon absent is the BFG. Armor is also abundant, with one each of red and yellow armor and a metric truckload of shards.

Although you're usually pretty close to a weapon when you spawn, there is an odd tendency for you and your opponent to spawn within sight of each other, be-getting a machine-gun duel.

Navigation involves some slightly tricky jumps that can help get you around the top level; the jump around a corner to the +50 health comes to mind. There are several teleporters, which are slightly confusing to follow, though one below the megahealth ledge spawns you back close to one of the lightning guns and near where you can make another try for the megahealth if lag makes you fall. One navigation issue is the dead end by the grenade launcher. A bit more connectivity there might have been nice. At least it doesn't lend itself to camping; you're liable to get telefragged if you linger there.

There are some interesting holes, gaps, and windows to fire weapons through; a window by the grenade launcher, floor gaps near the railgun, and gaps in the metal barricades separating the lower part of the central atrium from the two armors. Rockets fired through the latter at people going for the armors can earn some surprise frags, or chase someone away from the armor that you want for yourself. (I "stole" the red armor from Xaero once this way, as a matter of fact. He went to grab it, got a surprise rocket in the face, and ran through the nearest teleporter in terror, the wuss. :))

The grenade launcher is underpowered on this map due to the wide open nature of most of the combat areas. Even corridors tend to be either short, wide, with holes in the floor for grenades to fall through, or with branches for them to disappear into. The railgun is much stronger on this map for the same architectural reasons, but I found myself scoring most of my frags with the rocket launcher; the bots seemed to jump around a lot more than usual, making rail, plasma, and lightning difficult to use. Against humans the plasma becomes more useful for blinding and confusing railgunners, though.

Items are spread out and the map doesn't lend itself to camping. As is often the case, there's an abundance of armor on the lower level and the map's stronger weapons are on the upper. I have no item placement complaints, save that the ammo load could be lightened considerably in tournament play with "gametype/ffa, single" key/value pairs on some of the ammo boxes. A tourney map does not need five or six crates of rockets.

Bots don't go for the megahealth, but do grab everything else. They're easy to dominate if you run the mega and armors and take advantage of the jumps on the upper floor. The default selection of bots for this map play surprisingly well with this handicap, though.

FFA play is dead average, or a bit worse, with no powerups (even limited to only spawn in FFA) to cause excitement. The key to FFA domination of the bots is the megahealth, boosted by some armor timing, jumping around the top level, and throwing surprise rockets or shotgun blasts into melees. The grenade launcher becomes a bit more useful, particularly for crowd control when a mosh develops in the shotgun pit.

Though the map does not show up on the Skirmish menu for Team DM, there is location data; if you manually set g_gametype 3 and map qsc_tourney5pro and join a team, you will find yourself in places like Bunker and Rail Hall. The location data is spotty, though; in the room above the yellow armor it may claim you're at the yellow armor, and in many places it will list your location as "unknown". Team DM support seems to be a work in progress, rather than either lacking or complete.

The map appears to have no secrets.

Average in gameplay for deathmatch, fairly good for tourney if you like a bit of hide and seek, and has one glaring problem with its packaging: missing textures, primarily on doors on the upper level. Given the id gothic theme these are probably from the mapmedia.pk3 - confirmed, the missing textures are from the mapmedia.pk3. There are also some places where you can see HOM out a window by jumping close to it, due to lack of a bottom to the map's sky.

HOM, high r_speeds, missing textures, and lack of caulking behind curves, along with a grammatically-challenged readme, detract from this map's polish, but it will play. I just can not say for how long.

Tigs notes: A second version of the map was released without the pro attachment. 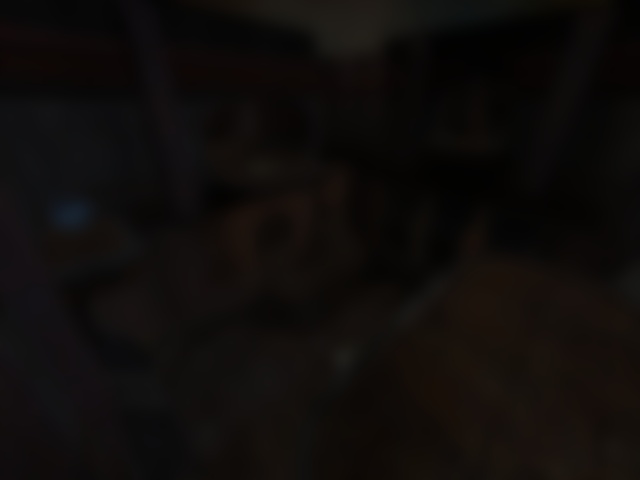