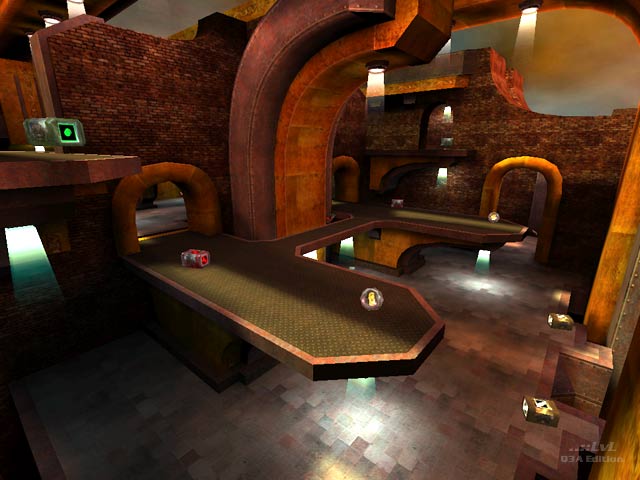 Aesthetically, Exotic Metals is basic id Gothic, but done well; there are no obvious construction errors or problems moving about the map. Layers of ledges and curving overhangs fill this two-atrium map with lots of connections and none of the old "room-corridor-room" syndrome. The levels all look somewhat different from one another, from the dank, dimly-lit basement with its ankle-deep water, jump pads everywhere, Quad, and red armor to the upper, brightly-lit levels with the weapons and more ornate curvework.

FFA gameplay is fast and furious with the default load of bots, or a comparable number of people. It's perhaps somewhat better than average, with the main action taking place in the atrium with the rocket launcher, on the level below the launcher's narrow catwalk. A tele on the bottom level close to the red armor spits you out by the rocket launcher, which seems to unbalance things a bit, and ensures nearly all the fragging uses that one weapon, though the map sports all of the usual suspects, save the BFG. Ammo is a bit on the abundant side, with multiple boxes of shells, grenades, and slugs clumped together in some places. Health is about right. Armor is scarce, but there is a personal medkit and quite a few shards and small healths.

The lowest level has many bouncepads up to various points on the next higher level, and is divided into two parts that are not connected except by going up and, elsewhere, down again; one has the armor and one the Quad. The next two levels see most of the action, because they have the main expanses of solid floor other than the basement, and the basement has no weapons. Narrow gaps near walls provide places to drop down, and there are stairs connecting them and jump pads to the top floor, which has a few narrow catwalks and the railgun.

If you go from quad to two of the lower jumppads while hugging the wall to save time, you wind up banging your head. Other than that and some accidental hole falls, versus sometimes having difficulty falling down on purpose, there are no real navigation problems. Another point, the stairs near the red armor sometimes seem to cause one to not actually collect it if running fast enough. One nitpick: there are no spawn-marker textures under the weapons or Quad.

The architecture limits rail-whoring but encourages rocket-whoring; nevertheless the +50 health spawns are good for railgun camping. Grenades seem strangely ineffective, perhaps because they tend to fall down gaps to the lowest level, but two grenade launchers (and two shotguns) were included. The map is symmetrical, except for the plasma gun being opposite the lightning gun instead of there being two of each.

Tournament play is supported, but the Quad and personal medkit spawn in tournament and the bots seem not to go for the red armor or quad in tournament mode. It's a bit of a hunt and stalk game, due to the medium size of the map, which tends to make the quad less unbalancing than it otherwise might be, but might not be to everyone's taste. Bots spend much of their time in the basement in tourney games for some reason, instead of hanging out in the rocket launcher room.

Team Deathmatch is supported, with location data. In larger team games, the abundance of ammo becomes a blessing, but many of the ammo boxes could have been limited to spawning in teamplay games. Teamplay works well with 2 on 2 or 3 on 3, and gets somewhat chaotic with 4 on 4. Larger numbers than that are not recommended. Action again concentrates near the rocket launcher, but also in the basement areas where the quad and armor spawn. Railgun hits are almost 100% kill shots in teamplay because armor is definitely under-abundant for large numbers of players.

The map is professionally packaged, appearing in the skirmish menu and sporting a polished-looking levelshot, and it looks well-polished itself. However, the triangle count gets up to 15000 in some places, which may make it chug on less-powerful machines. Reasonably modern hardware (up to five years old, perhaps) should manage though. 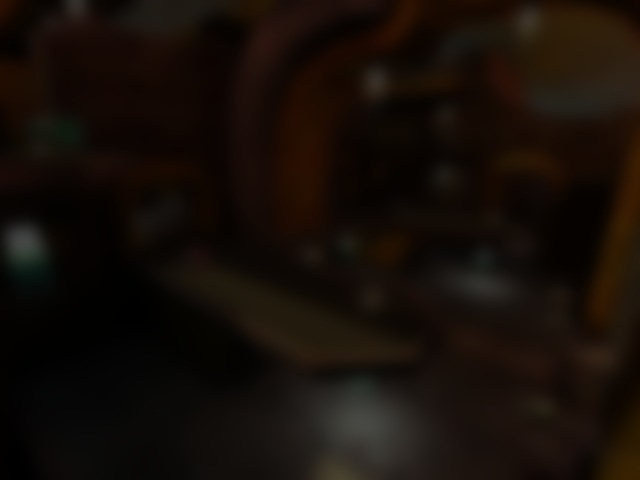