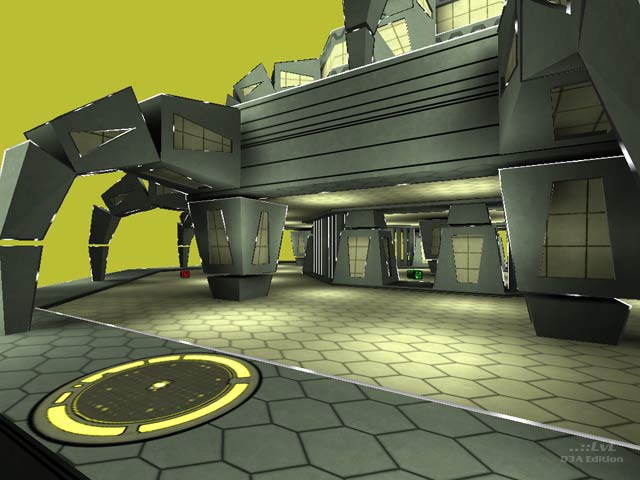 I won't have as much to say as usual about this map. The map's a small, cel-shaded space map, in the form of an octagonal structure with interesting geometry. Aesthetically it is intriguing and the bouncepad and other textures go well with the cel-shaded look. But gameplay-wise ...

Gameplay has issues. The map has rockets, slugs, a launcher, two railguns(!), and a yellow armor, plus a smattering of health. It's solid enough constructed that neither the pit nor the railguns become a huge issue.

However, there are several problems. For starters, that yellow armor is on a pedestal reached by either rocket-jump from below (not worth it, you'll lose a comparable amount getting to it) or by dropping from above (which causes about 3 points of falling damage) through a hole in the roof reached by bouncepad from the bottom level. Bots won't go for this armor, which makes Phobos easy to dominate on this level.

Worse is the spawn location: it seems players almost exclusively spawn on the lower level, while the weapons are all on the upper.

Combined, this means that a) if you get fragged, run, don't walk, run to the nearest bouncepad and go for the YA immediately -- and even if it's missing, you still score a rocket launcher; b) if you score a frag immediately drop to the lowest level and try to pick-off the poor sap as many times as possible. The lowest level has ammo and health so once you have a gun you can lurk here almost indefinitely to kill respawns, who will have to run a gauntlet of your rockets and rails to the nearest bouncepad the hell out of there, equipped with only the stock machine gun and gauntlet.

Somehow, despite the small size of the map and its simple layout, tourney play gets hide-and-seekish at times -- until one guy scores a frag and proceeds to score four or five more re-spawn kills.

Botplay has a major and a minor issue. Major is the noted tendency of bots not going for the armor. Minor is their occasional tendency to bounce up to the columns leading to the roof and then hang out there spamming rails (or, stupidly, machinegun rounds) until they eat a rocket or a rail and fall into the yellow death fog. They won't keep going up onto the roof and drop to the YA once they get on those columns. Really the two botplay problems are flipsides of the same coin; they rightly calculate that an RJ to the YA is not worth it, but will not take the other route. A smooth, continuous path of botclip just above the arcing column's surface to the roof might have made a difference here, solving both problems and making Phobos live up to his name on this map.

There is a technical flaw also: a missing texture. It's the ink for the celshading, so the columns and other architecture are outlined in black with the odd diagonal white line instead of just black, the result of the game applying the notorious "holodeck grid" image to the cel shader on mostly-angled brushfaces.

Amazingly for a small and fairly architecturally-simple map, r_speeds are high, in some places topping 15K. Oddly, this doesn't affect framerate as badly as typical, but players on low-end machines beware. The run up the architecture to the YA drop-down may get laggy.

Upshot: average. Add botclip to smooth the bots' way to the yellow armor dropdown in the roof, put a spawn up there and one or two on the rocket launcher/railguns level, maybe also put a weapon on the bottom level (plasmagun or shotgun perhaps, or move one of the railguns there) or even a second yellow armor, and fix the missing texture and it might even get an 8/10 from me, but as it stands: 5/10. 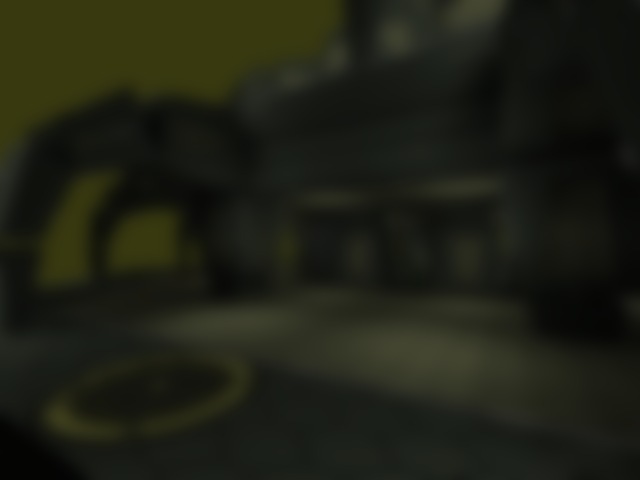