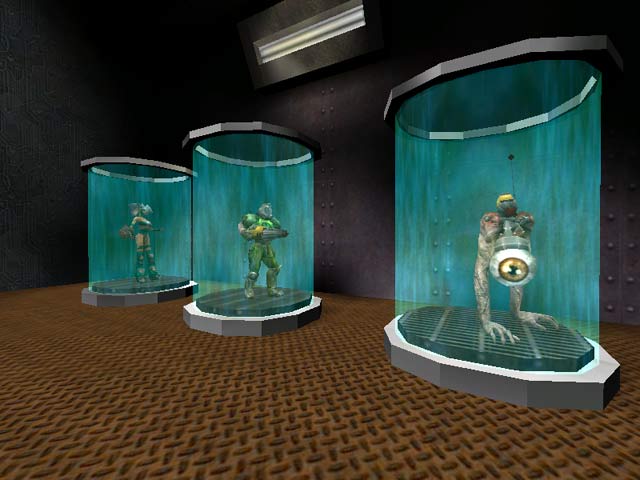 KommissarReb (SW12) Rep. 2210
#34   27 Mar 2022
For everyone who wants to see what this map has to offer, I decompiled the map and replaced the DM spawn points with CTF spawns so Red players spawn in the places where bots would normally go, and blue players will spawn in the human player area. I uploaded a video of me showcasing this map on YouTube: www.youtube.com/watch

Having played this map and seen how it was made, it gives me inspiration for things I'm going to implement in future maps. But it is not without it's flaws. I don't know if the missing textures were only in past releases of Quake 3, but I changed most of the missing textures with new ones. The ones in the area where you have to shoot the portraits were difficult to do due to the "common" textures surrounding them.

Agree (1) or Disagree (0)
sSCaesarSs unregistered
#33   12 May 2013
Would somebody please at least make a gameplay video of this map so those of us who are unable to play it see what it looks like? Or make a youtube video or something??
Agree (3) or Disagree (0)

Tig Rep. 1234
#32   08 Feb 2012
@sst13: If the "nobots" flags works on triggers/teleports, your example (image) could be two triggers, one above the other, with the info_player_start above that (no bot_clip needed). As the spawned player or bot appears, they would either trigger the first (nobots) trigger or fall down to the next.

Any idea if a hexedit of the bsp on the "nohumans" would fix the crash / freezing?

sst13 Rep. 393
#31   08 Feb 2012
The problem is within the player spawn spots. There are 2 special keys for info_player_deathmatch: "nobots 1" which is used in q3dm0 in front of the mirror, to prevent bots spawning in this room. And "nohumans 1" which works reverse, but was never used in the original maps. Maybe the piece of code, for the nohumans key, must be deleted or damaged in later point-releases than 1.17. So it crashes everytime you try to spwan at one of those spots.

Possible solution:
decompile bsp -> map
delete all "nohumans 1" keys from the spawn points
compile the map with -onlyents into the original bsp
create a new aas file from the updated bsp

This makes the map only crash-free but not really playable, because it's possible to spawn in one of the bot-only related parts of the map. With a little more work inside the mapfile, it's possible to seperate bots from humans: sst13.net/pics/bot-spawn.png
But this little machine can't simply compiled with -onlyents, because of the used brushes...

themuffinator Rep. 998
#30   07 Feb 2012
@Tig: Well I was running it through a mod I'm developing, but after a bit of testing it proved to also crash if I ran the old Q3A/Q3TA VM's through the exe. It turns out what made the map work is the ioquake3 VM's. If I recall the ioquake3's binary installer download comes with dll's instead.

Since VM's are the way to go I had compiled the exe together with the VM's some time back - www.mediafire.com/ . Obviously extract to your Quake 3 directory and run with +set fs_game ioquake3.

themuffinator Rep. 998
#28   06 Feb 2012
I got it working in an ioquake3-based engine mod. It's really nothing special anyway - pretty much just a mapping experiment. The inescapable massive atrium area just makes it that much more unbearable. I give it a 4/10 for its innovation.

Tig Rep. 1234
#27   03 Feb 2012
I remember this level working fine when it was released. Q3A was at version 1.17 then (from memory). After some testing with version 1.32c and IOQuake3 (on WinXP), I too am experiencing the lock-up. I can only assume something must have changed between the patch version that affected this release.

You can running Q3A in a window (not full screen) and then used Alt-TAB to get out of the lock-up. You can then use the Task Manager (Ctrl+Shift+ESC) to kill Q3A. A reboot should not be required.

A warning has been added to the review to let people know about the issue.

Maybe find patch which repairs the map or delete this one!

IT MAY NOT WORK

i never used to be able to play it, it would freeze my puter during the loading screen or right when i spawned, but i thought it was my computer cuz it sucked.

You really hate bots, don't you?

Some textures are missing.

The pak has an arena file so you can run it from the menus.

- Single Player
- Skirmish
- Change GameType to Team DeathMatch
- Select the Botulism Icon (only shows in Team DM)
- Run with PureServer Off, Frag Limit 0
- Make most bots your enemy. Put them all on one team (ie Red)
Run as many nightwave bots as your computer can handle.

Monitor the TVS so you can clear the bot traps. When the bot traps are clear follow the middle arch way for a straffing good time.

Agree (0) or Disagree (0)
SpasM unregistered
#7   13 Aug 2000
Heh...sort of a follow up to my last concern. I figured out the problem(instagib was loaded.) But now i have ANOTHER problem. I can't add bots. From the multi menu, or /addbot, neither work. Please help!
Agree (0) or Disagree (0)
SpasM unregistered
#6   13 Aug 2000
Um...I might be the only one with this problem, but i unzipped it and all, but it's not working. It shows the flaming q3 logo(which means a map you don't have) when i try to use it, whether through multi>create or /map botulism. I REALLY wanna try this thing out, and i'd appreciate an answer to this problem. Thanks =)
Agree (0) or Disagree (0)
PE#668 unregistered
#5   13 Aug 2000
Glad to see that most were able to see this is not a serious death match level. It still has a few weak spots but a good campers challenge.

The question is "who do you have to kill to escape sudden death ?"

Agree (0) or Disagree (0)
NeoNite unregistered
#4   12 Aug 2000
Yeah hehe this looks sweet. I really want some payback. Those bots really have an attitude sometimes :) and now I can get bloody revenge! Let's see who's on my list: orbb, phobos, hunter,grunt,doom,slash,uriel and daemia :B time to even the score. I'll check this map out asap. =)
Agree (0) or Disagree (0)
MEet-CEes unregistered
#3   12 Aug 2000
awesome bot skill challenge map!

just dont touch that one 'hidden' tele and youll be ok.but if you do go there youll better feel suicidal.one thing i like to do is in the GrenadeLauncher room shoot grenades over the wall to trigger the switch to sQuash those bots you can see it with your own eyes instead of the monitor,and if you want and are quick enuff you can jump on the tube yourself too. SqueSSsHhHh!

Agree (0) or Disagree (0)
Johnny Law unregistered
#2   12 Aug 2000
It was fun to find out the various mechanisms the author has thrown into this map. I'd say it definitely had the amusement value the first time through to make it worth the DSL download time, but I'm not sure if I'll ever come back to it.
Agree (0) or Disagree (0)
Octovus unregistered
#1   12 Aug 2000
Oh, this one is clever. So many ways to kill those bots! I don't like the area you can get stuck in either; once you kill all the bots therein, if they spawn elsewhere there'snothing to do but kill yourself and go find them.

The target area, which you must beat to get guns, is hilarious...and when you go to get ammo for them, watch out; you may find yourself fighting an army of (invincible) Phobos!

The "fear god" message at the end of the RL trigger hall made me think I was about to die..but that altar just soups up your health and armor really quick. Loved the RG practice area, with the lava button <g>, and the GL squishing-button area (seen in screenshot) is very funny too.

Good fun, and well worth a download no matter what your bandwith..and quite fun also to run around in tdm, with the bots on one team and u and your buds on the other. 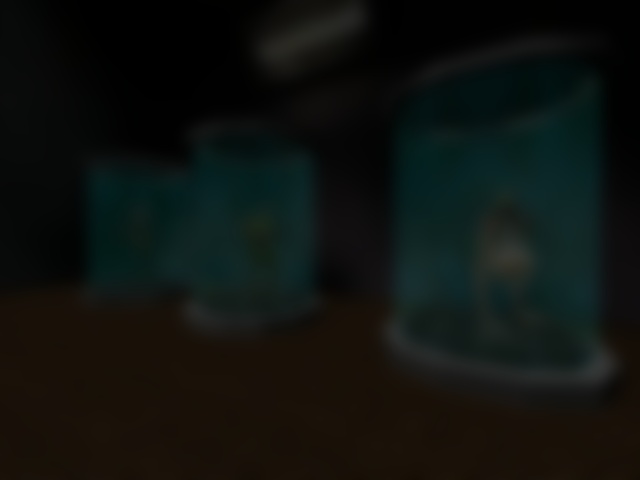