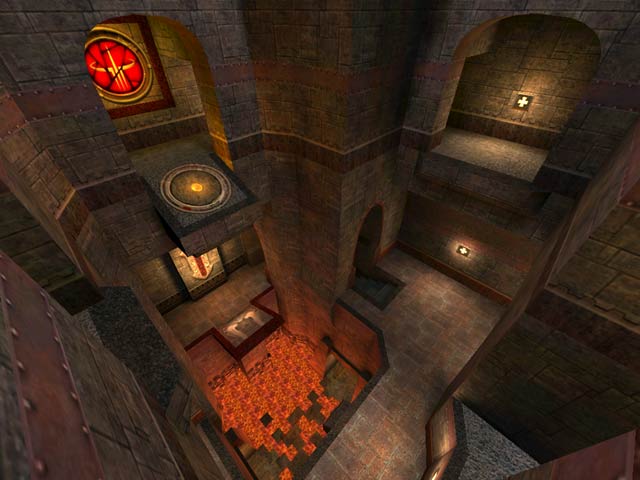 Takkie Rep. 1708
#65   05 Feb 2021
I totally agree with Tig on his review of this map. It is a great map, great layout, well build bla bla bla. But the lifts just annoy the heck out of me. And it is not that bots get stuck in them all the time but they just rub me the wrong way, no matter how much I try ignore the lifts. It prevents me of keeping this map... end of rant. sry
Agree (1) or Disagree (0)

1. The layout of the map can get you confused of where you are the first two or three times, but once you get the hang of it, you can really pull off some awesome moves that can make you a deadly player.
2. The weapon and item placement is superb. A smidge flawed, though. Maybe it'd be a bit better without the Quad and instead put in the Battle Suit powerup. Then again, it's just a small consideration, not a huge critical flaw. :P
3. The name of the map matches the name of my character. That alone got my attention. XD

Hooyaah Rep. 559
#60   21 Feb 2010
Here is a map that is worth keeping two copies of, one in a very safe place. Invite some friends or choose some skilled bots and be prepared for a variety of playing styles as you move through this awe inspiring layout. Appropriate ambient sounds and realistic setting make this map a real winner when combined with the relatively smooth game play.
Agree (2) or Disagree (0)

It's currently my favorite map.

I really think they should have the custom mappers make the maps for the next Quake. There are some maps out there that just blow ID's mappers away.

I'll give this map a 10. This map is an absolute keeper.

Other than a tiny problem with the lifts, this one is a blast to play.

Glad you liked this environment...

Hasn't gotten old yet, and I can't see it getting boring anytime soon.

Anyhoo, FANTASTIC map!!! The only custom q3 map that i have liked so far.....

Agree (0) or Disagree (0)
Octovus unregistered
#39   17 Feb 2000
Well maybe I should be saving my tens for later maps, but... nahhh, this deserves it. It's got the same old textures but somehow it just feels different. The weapons are almost perfectly placed and the invisibility has to be found before you can get it. (I.E. the secret door). My only gripe (ands im nitpicking) is I've never really liked lifts and was glad when they dissapeard- but then again bounce pads wouldn't feel right in their place.

Ty very much for it!

The platforms rise a little too fast. I like platforms to be dangerous. put a gren launcher by the slow moving platform for fun.

Agree (0) or Disagree (0)
Timothy 11 BlacK unregistered
#32   29 Jan 2000
Hello people......big deal it's more of a vertical map!Should we love a map just cuz it's vertical?Oh an "THAN",yes there are limited texture sets for Q3....but hello,you can use them in different ways ya know? I think a more impressive map,yet not really vertical is a map called "Ring of Bone"from a mapper of "Prince of Persia3d"at "WWW.RISCCHIP.COM"
Agree (0) or Disagree (0)
menace unregistered
#31   28 Jan 2000
Than: I agree with you totally, the id q3 maps for the most part blow. I too think the EXTREME overuse of symmetricality cut their quality in half right there, plus so many just don't have that great quality of spacious (as in, you can move around easily, but not huge) rooms that are well connected to each other in various interesting ways, often on different levels. (Think of naked4 or the ztndm/ztn2dm series or most anything by headshot or retinal or mr fribbles or peej, for instance) They just don't seem to have any awareness of that kind of mapmaking (the "forumla" style of great dm mapmaking that eventually developed). q3dm5 and q3dm13 are sort of getting at the right idea, but they're just not all that brilliant. Plus most of the maps are truly too flat, and the space maps are all just gimmicky.

As to WHY the quality of id maps plummeted, I'd say there's one very good reason: they canned American McGee. He alone was responsible for 3 of the 6 best dm maps from q1 and q2 (dm2, dm4, q2dm3), maps that not only became immensely popular and inspired great gameplay, but also inspired many other mapmakers to imitate them, and not just slavishly (as in all the q2dm1 clones) but by learning their important lessons about gameplay.

Also, I'm not sure if I'd consider John Romero to be a great mapmaker in the same way, but he sure got lucky with dm3. That just leaves Tim Willits (dm6, q2dm1) as their only mapmaker with any kind of good track record in making exciting dm maps, and his are more "1-offs" that seem to get lucky rather than just plain brilliant execution based on a fundamental understanding of how to make great dm maps. Mostly id's designers just don't seem to "get" DM, which is ironic considering how dm-focused the game is...

Agree (0) or Disagree (0)
than unregistered
#25   25 Jan 2000
to timothy black. I don't really understand what the hell you are on about. Saying that most homemade maps look the same is bollocks. Some look similar but that is mainly because of the limited texture sets in q3. I thought most of the id gothic maps looked the same, none had very nice layouts - some plain shit and I don't remember any vertical maps at all apart from maybe q3dm6 and that one near the end called apocolypse void or something (but I hated the spacey maps anyway). Already there have been three maps (kaos, ik3dm1 and addict) I can think of which are way more impressive than any id map you care to mention. Ok, maybe they aren't as flashy as the id maps but they all look good imho and have far more interesting layouts than shite like q3dm10 or whatever. Bland colours and textures? blame id, not the map authors. If you are referring to ik3dm1 then maybe the texture usage is a little plain but it sets a nice motif and is consistant throughout the map rather than having bits here and bits there. Also, these three maps I mentioned (along with several others) are not the corridor, long room, long corridor, room... that you get in quite a few of the id maps.

And a review will pop up on GMC2K v.soon (that`s with permission of course).

The gameplay is probably the most fun I've had playing Q3 to date.

Agree (0) or Disagree (0)
Than unregistered
#9   20 Jan 2000
this map is kewl. To be honest I haven't played it but then again, I haven't been motivated to play Q3 as the id maps depressed me too much. I think the architecture is great - not too over the top but very vertical and spacious. The layout is far superior to any of the id maps in the game too.

Sorry for this mini rant but I really dunno wtf has happened to the quality of id dm maps since q1. Q1 had a couple of great maps, Q2 also had a couple of great maps. Q3 has a couple of good maps but that's out of 20 or so - there really should be more. I reckon that the mappers id were more keen to show off their architectural skillz rather than thinking up a decent layout. I'm sure tim willits once said something like "any idiot can stick a few brushes together and accidentally make a map that plays well but to make it look good takes skill". We all know that's bollocks and it seems they concentrated their skills on looks.

Sorry for the mini rant. I hope you'll forgive me :)

Agree (0) or Disagree (0)
Raven unregistered
#8   20 Jan 2000
This is a great Map, it runs very smoothly, great Bot play, and is nice and large. Has a good tacticle feel more than just a frantic frag fest (Say that fast :) ). The layout is excelent, Looks are great, and the Game play just Rocks. Love what Vondur, has done with the lifts.

Equal with "Ik3Dm1" for best Q3 user made map, in my opinion, although they are both very different

Agree (0) or Disagree (0)
Shamblugh. unregistered
#7   20 Jan 2000
And so it begins....didn't take long, but that's no surprise. The first of the wave of maps that piss all over Id's lame efforts so bad they'll need scuba gear. The design of those two main rooms is simply excellent, and the overall layout is great. I like the subtle use of glitzy eye candy on the buttresses, rather than swamping the map with it. I do think a bit more gratuituous eyecandy (not GFX though) would have improved it, but a very solid map. Hopefully it will educate Id on how to make proper DM map design.
Agree (0) or Disagree (0)
Neon unregistered
#6   20 Jan 2000
I love this level, I have fallen down the lift shafts more times than i care to remember.

Yahoo, no realtion to the evil company!

Agree (0) or Disagree (0)
Peej unregistered
#5   20 Jan 2000
nice map, gotta love the layout, and the "classic quake" feel. nice looking, well put together, etc etc. at last, i think the first batch of decent Q3A maps are arriving.
Agree (0) or Disagree (0)
Killer unregistered
#4   20 Jan 2000
Yep, love this map. Along with IK3DM1 this is the best custom Q3 map to dat imho. Excellent texture usage, architecture and lighting complement an interesting layout with a strong vertical element. Only snag the lifts are a little bit finicky but this is a minor gripe for me. Fantastic work Vondur
Agree (0) or Disagree (0)
Neville McNeville unregistered
#3   20 Jan 2000
Nice large yet intricate map, kinda reminds me of messy base meets ztn's blood run, not very well suited to anything other than FFA however is its main downfall gameplay wise. Also the map really needs 4 or more people to keep you from getting bored. Aesthetically the map is very nice, probably in the top 3 third party maps so far texture wise nice job.

Cheers, look forward to more of your work

Another quality review by Neville Mc Neville - The Level Devil!

Agree (0) or Disagree (0)
d3f3nd3r unregistered
#2   20 Jan 2000
I just wanted to say that this is a really awesome level, whether you're playing against humans or bots. I've actually been able to find a few servers running it, which is unusual for a custom map.

As for the lifts, I like 'em, I think they add a little bit of strategy and uncertainty to the game. I've been waiting for a Q3A level that makes good use of lifts, and here it is! 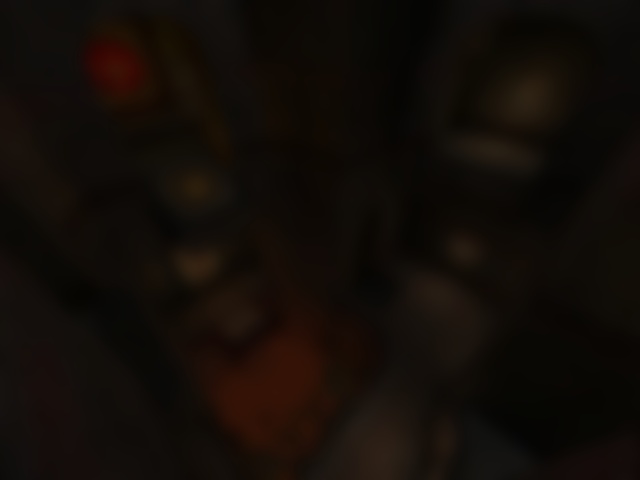