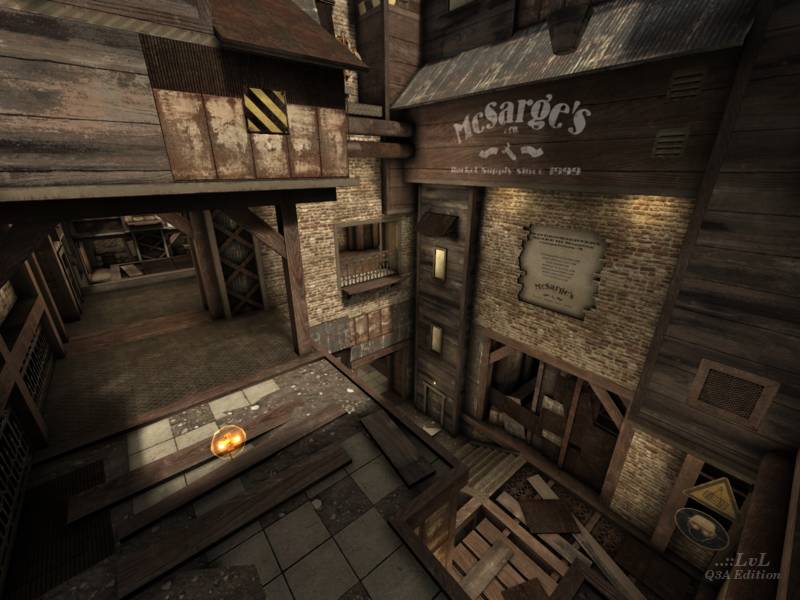 themuffinator Rep. 998
#24   20 Jan 2021
Despite the weirdly unpolished packaging by cityy's standards (no .arena, no levelshot, intermission cam stuck in clipping etc.) this at the very least serves as a benchmark for what idtech3 is capable of. I still go back to this resource hog for performance tests - impressed how quake3e-vulkan manages a steady 333 fps when normally it would hover around 200!
Agree (1) or Disagree (0)

A1yssa Rep. 155
#23   01 Jun 2016
This map has great texturing and great style. Really detailed.
A very impressive work and you must give it a try!
Agree (2) or Disagree (0)
Anonymous unregistered
#22   10 Mar 2015
Great map overall and worth the effort which must be spend on this one. Almost perfect work, fine details, great atmosphere and professional attitude. The only tiny detail which is not my: the music. The idea is nice and funny and fits the theme clearly, but the instrument could have be played better or even a faster title maybe. I know it's not the most important point for such a nice map and don't take my comment too serious, but I also have a harmonica and I'm not able to play it by myself :D. For Quake 3 gameplay, I prefer to turn on my own special tracks, especially here ;). (I'm using also IOQuake on Linux, without any issues.)
Agree (2) or Disagree (0)

Vymmiatacz Rep. 172
#21   05 Jan 2015
Ok, It was something wrong with com_xxxmegs.
Also for such maps like this one, r_picmip 0 is mandatory, otherwise all these sophisticated textures are blurry.
Agree (0) or Disagree (0)

CZghost Rep. 1581
#20   26 Dec 2014
If you're not sure, try to increase com_hunkmegs up to 256, as well as com_soundmegs and com_zonemegs. Do not forget to save settings and restart Quake 3. That's almost highest value it can be set up in config and can solve number of issues. If the troubles are still going on, tell us your system prefferences - processor, graphics card, your RAM, your operating system running Quake 3... I have Quake 3 on my Windows 7, original engine and works just fine. I am running Intel Core 2 Duo machine with nVidia GeForce 9800 graphics card and 3 GB RAM...
Agree (0) or Disagree (0)

Vymmiatacz Rep. 172
#18   24 Dec 2014
Does this map requires some special settings in config? I'm asking because I cannot play - game hungs up immediately after respawn...
Edited 52 seconds after the original posting.
Agree (0) or Disagree (0)

V1979 Rep. 315
#17   11 Nov 2014
As for me, I find 109 Mb to be large enough. I mean, if you download the archive and play vs bots or via LAN, it doesn't matter. But, it takes too much space at a server, and downloading from a server (if a player doesn't have such a map) can cause problems, too.
Moreover, cityy writes in readme.txt "The file size is stupidly big because the .pk3 contains a lot of high resolution textures, some of which I did not use on the map but wanted to include to give people the opportunity to use them in their own work..."
Thus, an admin could filter extras and put only necessary files onto his server, but, as I know, admins are far enough from doing such things.

Spectator bug is caused by the absence of a "clip" brush above. And info_player_intermission entity is partially in another a "clip" brush (thus, one can't move in spectator mod).
But there is a good news - there is a *.map file in the archive and you can fix the map if you want.
Edited 5.9 days after the original posting.

Agree (2) or Disagree (0)
Mike unregistered
#16   10 Nov 2014
GuitarMan, sorry if I've given offense. To me, anything under a gigabyte just doesn't feel like a big download any more. Just personal perspective I guess, but the download completed for me between two involuntary eyeblinks or less. :)
Agree (1) or Disagree (0)

GuitarMan Rep. 420
#14   10 Nov 2014
"Not a huge download"? 104 Mb for a single map IS huge, and it has nothing to do with connection speed (seriously you bring up the dial-up argument? seriously?!?). Also has nothing to do with working or not on different hardware set ups, yours or anyone else's; there are a lot smaller maps that won't work on good hardware specs because of a number of technical reasons.

I'm not complaining here, just stating the facts (the size of the map and the ridiculous arguments).
Still, thumbs-up to your previous comment (#12). And thumbs-up to cityy for the map, which I've downloaded, I'm playin' it and I'm lovin' it.

Agree (1) or Disagree (0)
Mike unregistered
#13   30 Oct 2014
One more thing: this is NOT a huge download. It runs fine on my HP laptop with factory video. Complaints about fantastic textures like these resulting in "huge" downloads are, to me, the most bizarre thing I've read in describing a map...well, ever. It's 2014, folks, if you're on dial-up, tuff - go play DOOM.
Agree (1) or Disagree (1)
Mike unregistered
#12   30 Oct 2014
Hmm...for me, graphic detail is EVERYTHING. I don't care if I find myself completely disoriented when I enter a map because the author has used some weird geometry to show us how clever he is. This game is and always has been a work of art, and with mappers like this it keeps improving. Yeah, I did a walkthrough, some of it on noclip, and I can't think why anyone cares what the clouds look like as you leave the top of the map. It's about gameplay and sheer beauty, and anything else is just nitpicking that sounds to me like it comes from people who have never designed a level, never mind a great one. This would make a fantastic movie set. It's like the city of your darkest dreams. 10/10.
Agree (1) or Disagree (0)

Mr. Ken Rep. 81
#11   29 Oct 2014
This has really great atmosphere! And the level of detail makes me embarrassed to think of my own attempts at level-making. But I kept thinking this level should have some secret rooms to discover ( or maybe I just haven't discovered them yet :D )
It is puzzling that spectator mode does not let you explore. :-(
Edited 3.82 minutes after the original posting.
Edited 10.61 hours after the original posting.
Agree (3) or Disagree (0)

Tig Rep. 1234
#10   26 Oct 2014
Interesting comments from both CZghost and V1979. Personally, I think if cityy had more time for building this map, he would have fixed the caulk issues that are only visible in spectator mode. Possibly with a clip brush to prevent access to the areas.

As it stands, this is a professionally built map, by a (now) professional mapper with a few minor issues. The fact that a map of this quality has been released for free, for your enjoyment, for a game that is almost 15 years old now is something pretty amazing.

Point out issues for sure, that is only way they will get fixed if the author has time, but also try to enjoy the map too, I know I did :]

caulk is a special texture used during the construction of a map. It is applied to a surface that will not be normally seen, but is required. This saves the render engine from "drawing" this surface on each frame.

CZghost Rep. 1581
#9   26 Oct 2014
V1979: I must to not agree with you. You shown us area that is restricted for player or bot. Please, do not overwhalm us with noclip cheat or spectator mode and post another errors that you found in this map and is normally visible for players...

People want to play the map, not fly around and try to find bugs in great work. Every work has its own bugs, not everything is so perfect it has no flaws, but something can be so perfect its bugs are not visible ;)
Edited 2.77 minutes after the original posting.

CZghost Rep. 1581
#7   25 Oct 2014
There are some clipping issues when you come close to the wall pillar, but that's minor issue. It plays smooth on my Core 2 Duo machine, loading bots is without any trackable problem. Great deal of detail and number of custom textures, shaders and few custom sounds give this map unbeliveable likefeel. Good job, cityy, I'd like to see your next map :) BTW, I like the Orbb picture on the WC board :)
Agree (0) or Disagree (0)

FragTastic Rep. 2249
#5   24 Oct 2014
This is gorgeous! Although it's bland on colour, the textures and brushing is superb. I'm so glad another map has been released by you cityy because you're work is impeccible. Another work of art so pat yourself on the back my friend :).
Agree (2) or Disagree (0)

Great work as always Cityy, love all the little details (strong TF 2 vibe) and the gameplay is solid as well.

But aside from the cyborg-eye thing, I do agree that a lot of these new maps seem to put more focus into textures than uniqueness. I mean, if you changed the textures to standard Q3 textures, it wouldn't appear to be that special anyway. That's why I tend to favor maps that offer something new and unprecedented rather than just graphic works of art.

On the other hand, combine an experimental map that offers something new to the table while having good textures. Just try not to overload the map with stuff: not everyone has a terabyte-sized hard drive!

Agree (0) or Disagree (0)
V1979 unregistered
#2   19 Oct 2014
As for me I don't like such maps. Once I wrote about new QL maps. As for me Quake III Arena style can be described like mix of "aliens' gothic" (say "hello" to Quake I ) and "futuristic tech" (say "hello" to Quake II & IV). But what can we see in the new QL maps? "Industrial", "medieval", "spaghetti-western" styles and other sorts of shit which require Mbytes of new textures, shaders, sounds, models... It seems to be a token of disrespect to players who have to download all this stuff. In the game all these styles look like an aliens cyborg's eye which is watching you from the your girl's ass while you're going to fuck her. You're noticing it and screaming out: "Holy shit!" or "Jesus, help me!" or "WTF?!" (depending on your common vocabulary).
But anyway somebody can like this. So, such styles can exist.
As for this map. It contains bugs. When I join as spectator I enter the only point and can't move but I can see some visual bugs and make some conclusions:
1. maps has not passed -vis stage while compilation
or
2. there are visible surfaces with "caulk" texture
Thus I can't give high scores to this map. Though cityy is a great mapper, but with such quantity he has transformed from artist into mechanic.
Agree (1) or Disagree (1)
pat howard unregistered
#1   13 Oct 2014
great review, Tig.

"This is what happens when imagination, time and the ability to edit a game level come together."

actually, to me, the most amazing thing about this map is how little time cityy had to make it! if i remember correctly, the 4th maverick servers mapping competition was winding down, his first attempt at a CTF map hadn't panned out, and he had to pull something together in the last 5 or 6 weeks to meet the deadline. i didn't think he could come up with anything so detailed from scratch with so little time, let alone making custom textures. but cityy consistently pumps out great maps, seemingly on command. that's the hallmark of a true veteran level designer :) 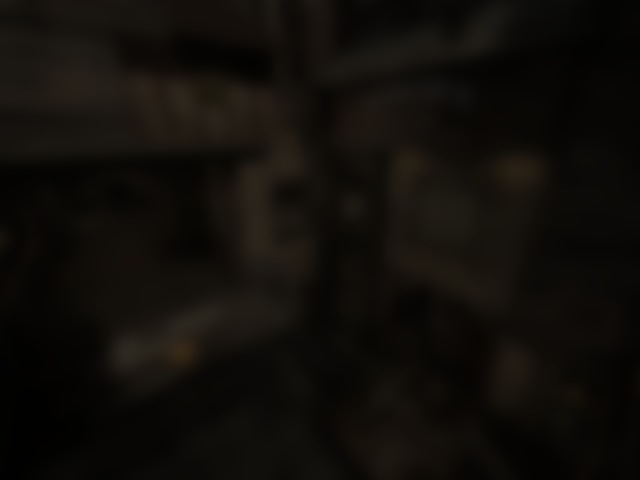