We played tm2_amphetamine (The Other Side of Nowhere) with 6 human players and no bots. It was really a lot of fun, and was about the right size for the map. Due to the layout, it was perfect for someone to defend the flag, but also a good challenge to try to get the flag. Usually, we have our CTF style gametypes set to seven minute matches, and this one finally was won in 13 minutes. (The kids won, grr... 2 to 1). It really has a good balanced feel, and I liked it a lot more than initially I thought I would. Definitely fun if you have some human players. I don't know how it plays with the bot file I made, as we did not use it this time.

Definitely recommend, and more fun than it looks like it would be.

Mapsking Rep. 194
#15   15 days ago
We played tm2_zuggzugg tonight, with 12 players, it seemed about right for the map, it was huge. Possibly, a few more players could work as well. There was one blue jumppad, where the jumppad was not positioned correctly, so it showed like it was split in half. Still, fun, and impressive it was made in a week, like most of these maps.

I will also be honest here, the map was very confusing to get the hang of the layout for us, we spent half the time trying to find out where we were going. After you play it a few times, you will get the hang of it, and the layout of it, but it can be a deterrent for someone new to the map.
Edited 3.4 hours after the original posting.

Mapsking Rep. 194
#14   21 Sep 2020
I'm going to be honest here, FireBlade/The Cube is not much of a map. According the the author's readme, it was only made in 5 minutes, due to school and such. It is a single room, with a few lights and a quad. Not much in the way of atmosphere, but I still had fun with it. I created a working bot file for it, added 10 bots, and it might be fun, for something like a contest to see who could be the first one to score 50 frags in 5 minutes. We have a fairly large family, but I'm just giving a different perspective on the map, as it is definitely chaotic, but that is not necessarily a bad thing either.

Even though it is literally nothing other than a sealed room, and I had fun with it, there is one major gripe I have with the map. That is simply that when you respawn, you spawn facing the wall. It is never nice to spawn facing a wall, it could have been easily modified to face into the room when respawning.

Good for a few chaotic frags, but other than that, the map is very underwhelming.
Edited 41.62 minutes after the original posting.

"Arg! It's another Egyptian map." I squeak by because this was done before the flood of egyptian maps came in. :)

"...but this is 1 week's work!" Actually, it was about 4 days worth of work, on and off. Most of which was just working on the flagroom and center route. The side routes and midfield were all finished on the LAST day, FIVE hours late no less. Hence the misaligned textures and other errors that weren't fixed :(

Sorry for making you wait on me that day Equim. :)

Thanks again to lvl for the favorable review and to all the mappers who participated. Good work everyone.

Oh yeah, much thanks to those of you that actually took the time to play each map.

Zugg zugg: Arg! It's another Egyptian map. That aside, the gameplay is pretty nice. The looks are certainly on par or better than the rest of the pack, as is architecture; lighting is nothing much, but this is 1 week's work! Layout is pretty thought out, though having numerous spawns and an RL in the flagroom makes a tight defense quite hard to get through. 9/10 though since it's short order; bots weren't too happy but it's CTF.

Agree (0) or Disagree (0)
Octovus unregistered
#10   04 Mar 2002
Monsto: Bad luck with the turtle packs, this level looks very cool and has nice ideas, but no aas. Looks like it could play well, though.

Myth: Nice job! Most polished of the pack probably, though action focuses around RL a bit much. Nice theme and well executed...and a dopefish. 8/10

Watt: Pretty large and simple textured, but that makes sense with the timelimit; combine this with the lowered gravity and railguns become a bit too powerful, though. 7/10

Agree (0) or Disagree (0)
Octovus unregistered
#9   03 Mar 2002
Gleep: Pretty fun, though way too simple and the skybox makes no sense (two hallways are clearly across from eachother but you get no HOMs instead) 7/10.

Gryndehl: Bots were fine for me, but whatever; a nicely thought out ctf map in the vortex style, though some areas lacked connections (7/10)

Keditok: Classic chokepoint CTF, bots were ok, but there was just too little reason to be upstairs (6/10).

Fireblade: Oh dear, must have been a busy week (no score)

Gear: A cool idea for a CTF map, though the quad should have been swapped with MH imo; it's not worth the deadly trip just for 100 health. Bots did one lightning quick capture aganist me right away and then promptly started sucking, kind of weird. 7/10.

Agree (0) or Disagree (0)
Octovus unregistered
#7   01 Mar 2002
Akuma: Another nice one for the pack, though some parts have way too few attractions. Back halls in particular see little action. 7/10 I think.

Amphetamine: No bot support so I can't score it, but looks like a cool idea for a CTF map. Too bad really :- (I read the readme)

Asnagrim: Disjointed Egyptian level that's sort of gimmicky, but for it's size and considering it was constructed in a week...main complaint would be lack of clipping. 6/10.

Ad5: This is the one in the pic for starters :-) Kind of disjointed but cool collection of rooms; great ideas but time constraint shows with lack of polish. Some rooms have way too much attraction over others. 7/10 (I will only score the pack once I've played all the maps and averaged what I think of 'em).

Agree (0) or Disagree (0)
Akuma unregistered
#4   27 Feb 2002
elendeNATTER!: Sorry we can't fix any issues with the maps, they were built for the Turtlemap challenge in seven days.. Therefor tweaking them after the seven days would be cheating :) 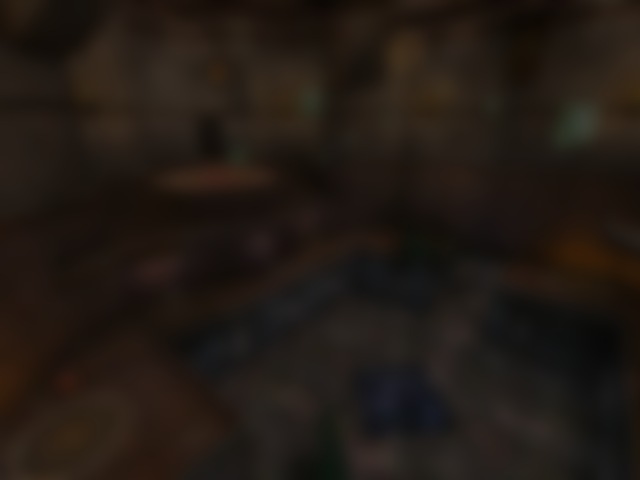