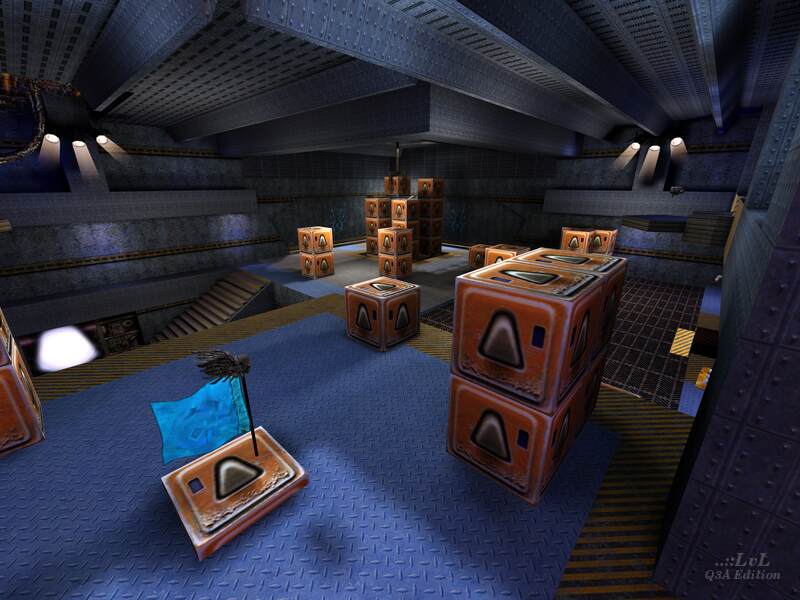 I have to say this is a bit of weird map to review. The author obviously loves Quake 2, so naturally this made me curious, since I'm also a big fan of that game. I was expecting something very Quake 2 like, probably textured with the eQ2 set from Evillair. The reality however, is much different.

None of the architecture resembles Quake 2 at all and even the textures, with some exceptions, don't give you the impression of actually being on Stroggos. There are just a whole lot of sounds directly ripped from Quake 2 playing in the background, which is basically copyright infringement, even if the game is old.

That's not the only rule that's being broken, because a lot of the CTF design principles are ignored too. For instance, there is no clear indication in which base you are (Red or Blue) because those colors are not being used (with the exception of a little line near the flag room). Also, armors are hidden in crates.

On top of that, the layout is not interesting at all. The texturing is extremely repetitive and the map comes down to big empty rooms and long boring hallways that bear no sense of direction. Even as a big Quake 2 fan, I simply cannot recommend this map for either it's nostalgic premise or it's actual gameplay.