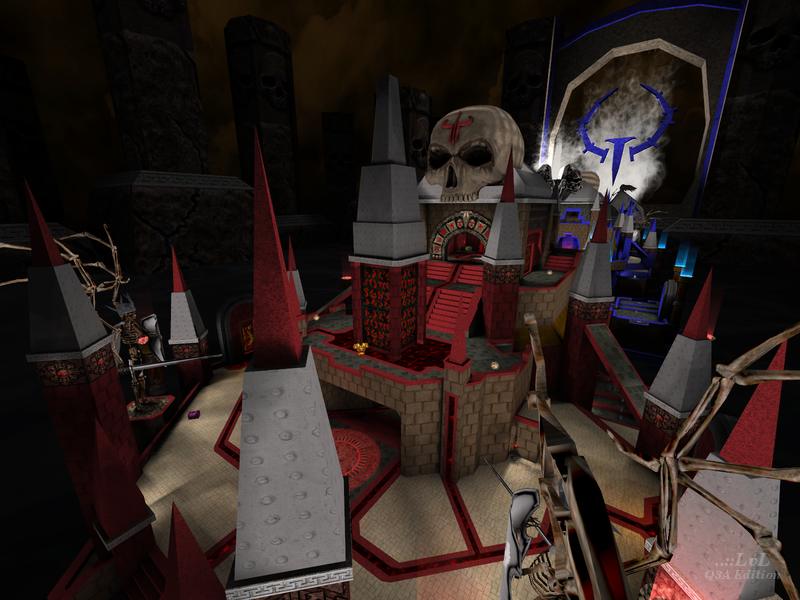 Do not let the larger download size deter you - this map is really something to behold. The author has gone to great lengths to give this map a compelling atmosphere, and it shows. Complete with unique textures, models, and sounds, Ossa Delubrum will not disappoint those of us looking for a map that takes full advantage of the unique visual style that the Quake III engine can pull off.

You really have to play the map in order to get a sense of its scale. Players seem so small compared to the giant, looming structures surrounding the play area - particularly the huge, burning archways that hold an iconic Quake rune overlooking each team's base. There are also some nice skeletal statues in the courtyard of each base, along with giant Quake III-branded skulls in certain areas of the map. Together with the great texture set and ambient sounds, this map manages to deliver a truly unique atmosphere that I have not seen in any other map.

Overall, this map's gameplay is solid, taking the form of classic 2Fort style capture the flag. Each base can be roughly split into three tiers. The upper tier holds the flag room and is usually where most of the action happens. Launchpads from the opposite base offer almost immediate access to this tier, making it the most direct route to the flag. This does not mean capturing the flag via this route is easy; it is a relatively congested area which means you will have to push through the majority of the base defenders here. Yellow armor, health pickups and a rocket launcher/ammo can be found in this area which serve to equip either the defenders or the attackers, depending on who is winning the battle.

Jumping down from this area will put you at the middle tier or the courtyard. This is the most open area of the base. Here you can find three lightning guns in the blue base or three plasma guns in the red base along with ammo, so there should be no shortage of weaponry for the players. Jumppads on either side of the courtyard take you back to the upper tier.

There is also a q3dm17-esque railgun platform in the back of the courtyard connected via launchpads. You will also see a very noticeable skull above a staircase that leads to the bottom tier underneath the base. Careful though, everything below this tier is deadly liquid, so watch your step. In this room you can find a shotgun, a health pickup, and three doors - one straight ahead and two on either side. Go through door straight ahead, and you will find a one way launchpad that puts you on a platform with a powerup spawn (it cycles through every powerup if I'm not mistaken).

Go through one of the side doors, and you will find an elevator that takes you to a catwalk on the side of the base. If you follow this catwalk, you will find yourself at the front of the base where there is an item spawn that alternates between red armor and a mega health pickup. Due to the openness of this area, your red armor or mega health is likely going to be depleted quickly from enemy fire. Also a launchpad here takes you to the upper tier of the opposite base - the most direct route to the flag, as described earlier.

Finally, there are two platforms in between the bases that hold various items and serve as alternate routes for flag captures, and are connected via launchpads. This route is usually less populated than the aforementioned upper tier route, though it takes a bit longer to navigate to the flag room.

The only gripes I have about the gameplay are the stairs and the launchpads. Most of the stairs are a bit too steep. When walking over them they propel you into the air slightly. This is annoying since you can not control your movement for that short period and can be especially problematic if you happen to be directed towards the edge of a catwalk, thus propelling you to your death if you do not catch yourself. Making the steps more gradual along with raising the catwalk walls a bit would greatly improve the flow of the map in those areas.

As for the launchpads, if you come at them from the side or slightly off-center, there is a good chance you will get snagged on the corner of the platform wall causing you to bounce off at on odd angle, and once again will result in you plummeting to your death.

Gameplay annoyances aside - in the grand scale of things, this map shines. Captivating visuals and interesting gameplay are sure to keep you going for several rounds. 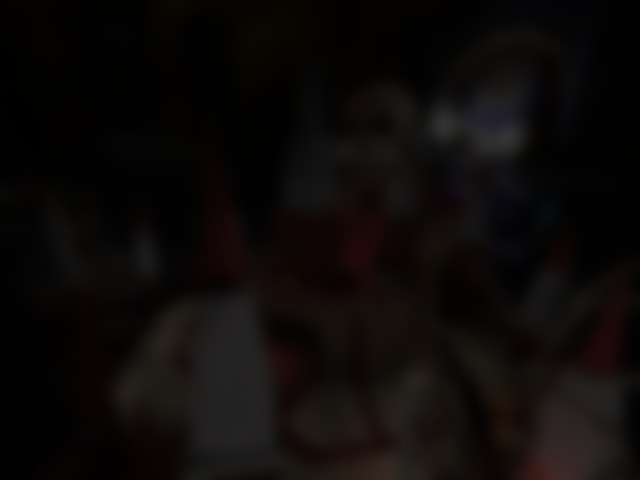