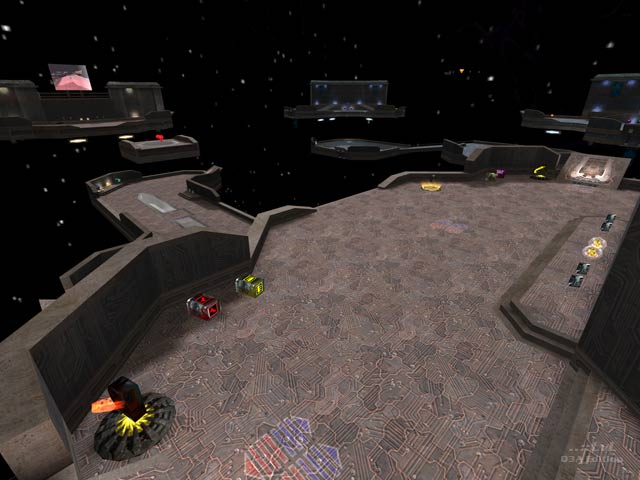 Opposing Teams is a Team Arena redux of PaN61's Opposing Force. Before reviewing this map, I decided to play around with the original so I could get myself acquainted. After playing both, I must say that CZGhost did a groovy job of converting it for Team Arena.

For those who haven't played the original, I'll review the layout as well as the core item placement. The map is separated into three primary areas, two for the bases and a third for the middle. These areas are subsequently split between three other platforms. At the bases, the upper platforms carry some weapons, (the RL, PG, and SG) three of the team power-ups, (Guard, Doubler, and Ammo Regen), an invulnerability sphere, and a DM17-esque two-way accel pad path giving access to a YA.

The lower platform is somewhat lopsided, with the higher end supporting the flag and the other end some other goodies like the Chaingun, Scout, and Personal Teleporter. The mid playing field has a similar setup, with the Nailguns, as well as some neutral Doublers and Ammo Regens, residing on the upper platforms, and the RG and more Guard power-ups at the bottom.

A teamed RA / MH float directly above the center, accessible only by a moving platform. If the game type is One Flag CTF or Harvester, the RGs are moved to the upper platforms with the NGs, and the neutral flag / skull generator sit on the center where the RG would otherwise be.

Gameplay is as hectic as can be! The rune of choice is the Guard for most situations as this will provide you with some solid protection. This is necessary considering that the bases are provided with the CGs, which are extremely fearsome to face in an open environment such as this - not to mention that the RG is an ever-present threat.

I personally feel the Scout rune is unnecessary in this map as you will usually be traveling at a quick pace without it. The neutral rune spawns are a neat idea, (and have custom yellow spawns as well, courtesy of CZGhost) and can be convenient if you end up respawning in middle. Also notable are the Personal Teleporters, which are an uncommon feature on CTF maps and can really save your butt if you're being ganged up on by enemies.

All supported game types appear to work well except for Overload. CZGhost has placed a barrier partially surrounding the obelisk in an attempt to shield it - the problem is that it is still extremely vulnerable to long-distance attacks, and I was able to pick away at the skull literally on the other side of the map, comfy in my own base (the bots caught on as well). I personally think a U-shaped barrier with an opening facing the bridge in the lower bases would function better and make Overload feel less "cheap".

In comparison to the original map's visuals, Hipshot's green sky which was present in the original has been replaced in favor of one of the TA backdrops - the planet Earth (or some similar rocky body) being pummelled by a gigantic meteor.

CZGhost seems to have taken plenty of notes from the TA mapping guide - besides the additions of the new weapons, items, and game type support, the directional arrows are also added. There's even a ROQ movie file done in the same spirit as the ones packaged with the retail TA maps. The video can be seen both in the menu and in the map itself projected onto screens mounted on the walls of the NG platforms.

A splendid revision of an already interesting space CTF map. Check it out! 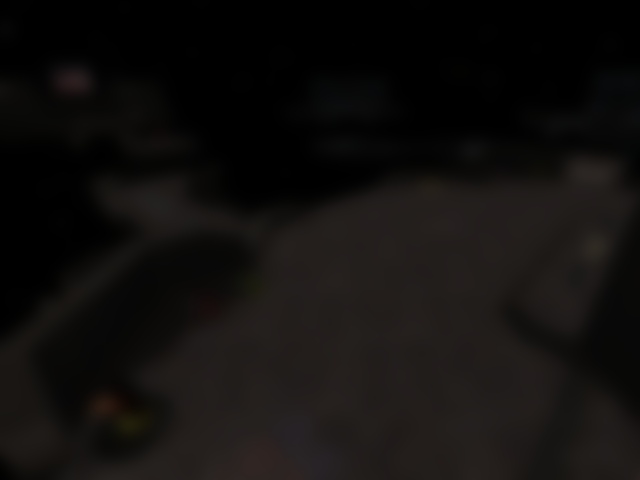