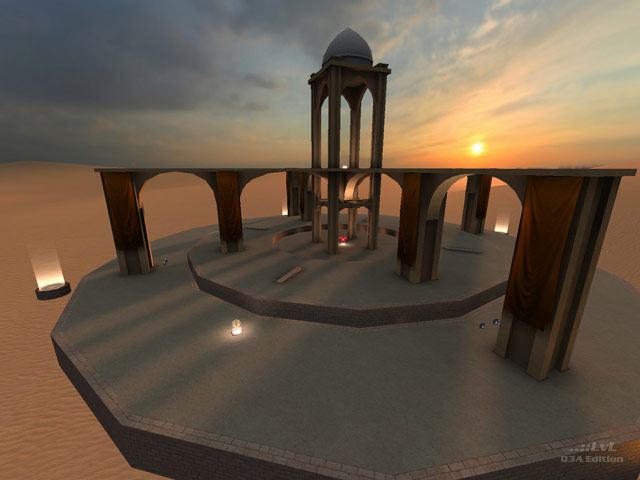 A map made in two days; inspired by a "ragequit" on CounterStrike, hence the name. For those of you who have played (or at least seen) DaEngineer's visually marvelous Shibam arena, you will find the same theme replicated here, only this time you are no longer fighting in an Arabian town, but on a floating platform above a sea of sand - courtesy of q3map2's sky portal feature.

This is definitely an out-of-the-ordinary floater, not only in aesthetics but in gameplay as well. The void is not as much of a threat here as it is in other space arenas, as the only places you can fall off of are the outside edge. That does not mean this map is a walk in the park, far from it actually - when you spawn in, you will notice that the circular platform is actually composed of concentric rings which bob up and down. Although the movement is slow and steady, it has a profound effect on fighting - particularly the concept of height advantage.

Players begin with only RL's and gauntlets - your MG is taken away from you. A RA is located in the center of the arena below a four-way structure, and above it on the structure is the Regeneration power-up. A few health bubbles are sporadically placed for good measure.

Since it is rockets only, the challenge of the map is to try and utilize the RL under ever-changing vertical positions. One moment you may be dominating over your opponent, the next you are low and in trouble. Most players are probably accustomed to shooting at another player's feet for maximum accuracy and damage potential - well you better be extra-careful here, because your rocket may end up exploding against a rising platform prematurely, or a player with good reflexes can duck under a rocket when the platform drops. And if you are on a lower ring, you can forget about using feet, and direct hits will become more important. I guess you could say this is a great place for rocket aim practice! To extend survivability, you should keep watch on the RA and Regeneration. If you want to add a bit of spice and danger to the map, play it in CPMA and enable Damage Thru Floors - that Regeneration platform won't be such a safe haven anymore.

While the rockets-only concept works fantastically for Ragequit, I personally would have liked to see a regular version with weapon spawns and all, for people who like more variety and / or want to see the effects of bobbing platforms on other guns. Then again, I guess you could play it in CA. Speaking of gametypes, the author recommends Tourney for the best experience. FFA's work too if you like frantic, in-your-face brawls.

As you would expect, the bobbing rings have a serious effect on botplay. The bots do not move or respond to you unless you are real close to them, you can even just crouch right behind them without touching them and they will not budge. For 1v1 this means easy victories as you can just take your opponent by surprise. In FFA however the issue is less pronounced, as some other bot will move into their sight or disturb them, keeping the game flowing. Either way though, online play would suit this map the best.

An entertaining, challenging, and (pleasantly) frustrating map. I'd say go for it. 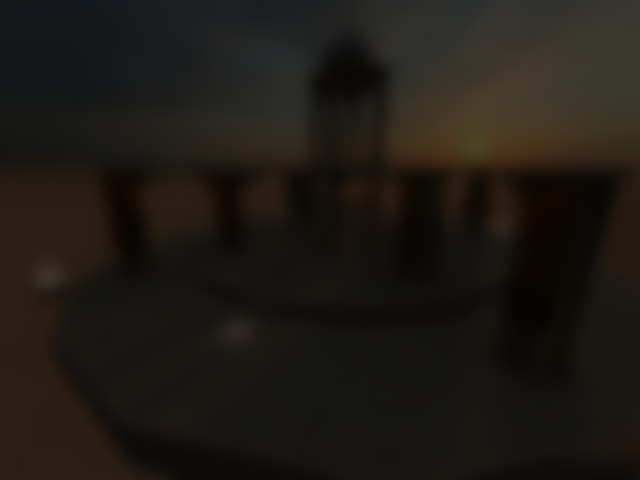