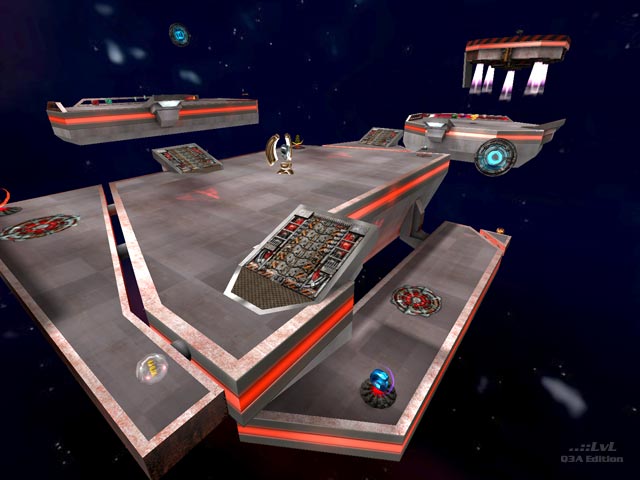 I found this old Team Arena map some time ago while scavenging Eraser's Engines of Creation website. It got my attention quickly, being a fan of the TA expansion pack because of it's unique map design style and fun gameplay.

For those of you who have played Team Arena or Quake Live, (both games have it but vq3 does not) you will probably recognize right away the similarities to the space CTF arena "Vortex Portal" (mpteam6). It's a love-hate map for sure; but whether you enjoy mpteam6 or not, you should take a glance at Celestial Mechanics.

First of all, I must mention that there is no botfile (see below). The creator did attempt to build one, but he reported that the bots simply did not run around the map or follow orders. You will have to find humans to play this one (good luck with that in 2011), or create an .aas file yourself if you desperately want to try it out. Setting that issue aside, I found this map to be intriguing from various points of view.

Although it is based off mpteam6 the map plays differently, for the flags are located in the exact center of the bases on a modestly elevated platform, unlike on mpteam6 where the flag is located next to the back on the highest level. This means it can be attacked from practically any direction. To counter this, a RG sniping platform was placed in the air for the sole purpose of keeping people away from the flag. Sniper platforms are usually something that you would not want to put in a space CTF map, but here it works nicely to balance the bases and if optimal defense is desired, just you camping won't do since someone can shoot you from the side while you are focusing on another intruder.

The middle area is a little bland, consisting of only three platforms, the central square one being the lowest of the three and carrying some goodies like the PG, kamikaze, or power-ups in the middle. (unless the gametype is One Flag or Harvester) I personally think it could've been spruced up a bit, maybe by putting the kamikaze on a separate, higher platform; but that is just me.

From a technical point-of-view, the map begins to shine at it's brightest. I believe Eraser must have read the Q3TA level design manual from id software, because this map actually does attempt to replicate the TA style as closely as possible. Not only is it clad in many TA-exclusive textures, the vortex portals actually send you through a wormhole just like on mpteam6, as opposed to just teleporting you. There is even a cinematic provided which shows a bit of what to expect in the arena, and can be seen both in the menu selection screen in TA as well as in-game on a hovering screen, which is something I have not seen duplicated by most other people. Also worthy of mention is the custom skybox made by r3tina, which looks superb - you will find yourself fighting within the veer of a colossal, ringed planet.

If you still have a copy of Team Arena collecting dust somewhere, you might want to consider picking it back up and laying off the CPM for a while. Unfortunately in this day in age, few people continue to play Quake III, and TA as a whole is essentially completely dead. An alternate version of this map with support for Q3 might have gave it more human playtime. Nevertheless, you should check it out even if only to examine how good space CTF arenas are designed. And keep on the lookout for his upcoming map for his own EntityPlus modification as well!

Bot file: Thanks to Mapsking for putting together a bot file for this release. 12th Jun, 2020. 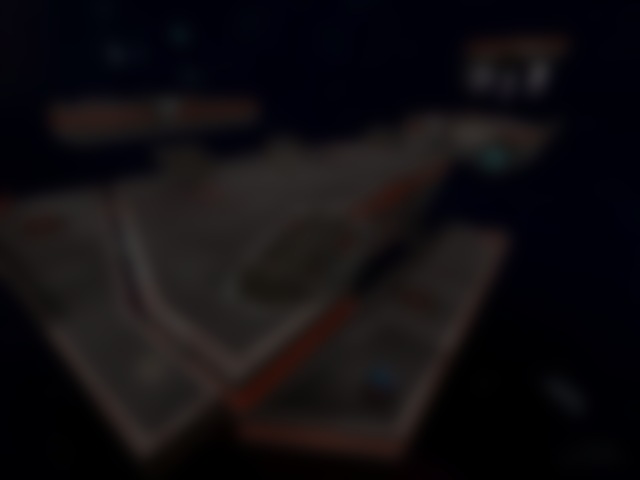