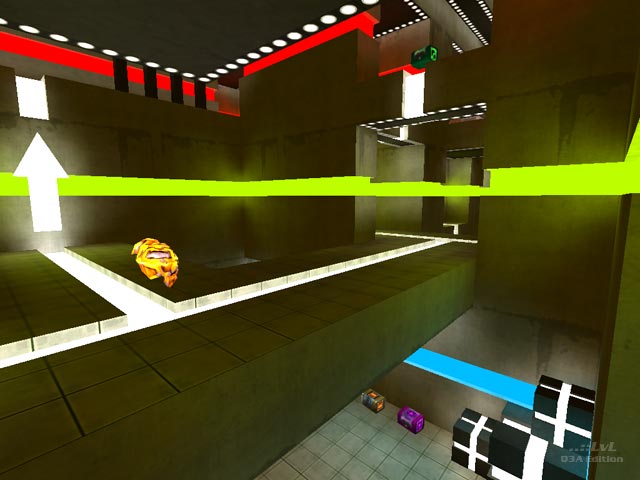 This map has the basic structure of three layers, from bottom to top blue, green, and red, fairly simple architecture, and a consistent look. As with acid3dm7, besides fairly basic geometric construction, few to no curves, and color variations on the basic theme as location cues, the author eschewed standard jump pad and teleport cues. In this map, bobbing circles or up-arrows appear against the back walls of various niches - the former are teleporters and the latter are jump pads, or rather the floor in front of the arrow is.

Tournament mode is supported but will be somewhat of a hide-and-seek. The map has most of the q3a weapons, notably lacking the BFG, and has no powerups. The lowest level has megahealth and the railgun, the middle level the energy weapons and an accessible yellow armor, and the top level rocket launchers and a shotgun. Red armor is on the top level on an isolated ledge that seems unreachable without a rocket jump, another feature in common with acid3dm7. Playing the map in OSP or CPMA probably makes it reachable by air control from a bouncepad on the level below, and perhaps also by strafe-jump, but in vq3 a rocket jump seems required.

Bots have problems with this map, which is shocking as it has simple boxy corridor geometry of the sort bots usually love. They tend to get stuck on the lips of bouncepad shafts, becoming railbait. Another bot issue results from a reciprocal teleporter pair on the red level; bots will go back and forth in a loop until fragged. One of the teleporter destinations is also used by a teleporter on the green level, so the loop is often broken by a telefrag. Reciprocal teleporters tend to cause similar botplay issues on any map where they are constructed, though.

One spot on the green level is curiously dangerous in FFA versus bots - you will be chasing and fighting one bot and, near a certain jump pad up to the red level, you will suddenly start eating rockets from behind from another bot that has seemingly appeared out of nowhere. Random long distance rail frags from dead-eye bots can also get annoying, as well as a constant low level of damage from machinegun fire if there are very many bots. These problems are largely absent versus humans.

Bots can be dominated easily by timing the yellow armor and megahealth, or by being accurate with the rail.

The railgun is overpowering in this map as there are lots of long sightlines. Putting it on the bottommost level nerfs it somewhat. Vertical action is limited; play tends to circulate around the corridors. The breadth and length of the corridors where much of the fighting occurs limits the effectiveness of rockets and grenades. Another factor is the tendency of rockets aimed at feet to go past the edge of a drop-off due to the slight dips in the floor surface where inset white light-strips go over the edge. Bots seem to linger at these spots, making bot matches particularly affected by this. Using weapon clip instead of player clip to smooth the floors would have prevented it.

Curious assemblages of crates and leaning planks occur here and there. The most obvious use to which I put these was to avoid falling damage when dropping down to a lower level, by landing on one of the assemblages, but they probably provide some useful trick-jumps in promode physics. In vq3, they are primarily decorative, though falling damage gets annoying on this map so their use in enabling staged falling is not to be completely dismissed.

Team deathmatch is supported from the skirmish menu and with location data, but fairly often your teammates will be somewhere "unknown" in this map. Weapons, rockets, armor, and health all seem a bit scarce in 3v3, while 2v2 produces slow gameplay.

The red armor is ignored by bots and by most vq3 human players -- if there's enough of a player load for the game not to be crawling along in hide-and-seek mode, nobody has enough health or armor most of the time to dare rocket-jump anywhere. This problem likely largely disappears in promode, save for the bots continuing to ignore the red armor.

There are no apparent technical errors, save some overdraw which is a non-issue; polygon counts remain low, sub-5000 just about everywhere, and framerates remain high.

Gameplay, aesthetics, bot support, and connectivity all seem poorer than acid3dm7, for various mostly separate reasons, at least in this reviewer's not-so-humble opinion. The more free-flowing multi-level layout of acid3dm7 makes that map vastly more interesting on its own.

If you're going to download exactly one map by this author, I recommend acid3dm7 over this map, but this one isn't a complete waste of time. 3v3 teamplay is enjoyable, and FFA works okay. The level probably plays much more fluidly and fast in promode to judge by various aspects of the levels design, and is blessed by high framerates. A second opinion by a promode player of sufficient skill may be in order. Upshot: 6/10, maybe 7/10 for promode fraggers.

Tigs notes: This is a re-skinned, re-worked version of an earlier version of rushed, also by acid 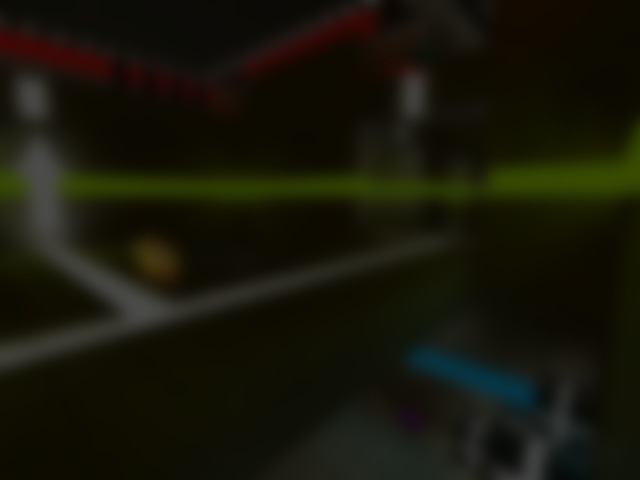