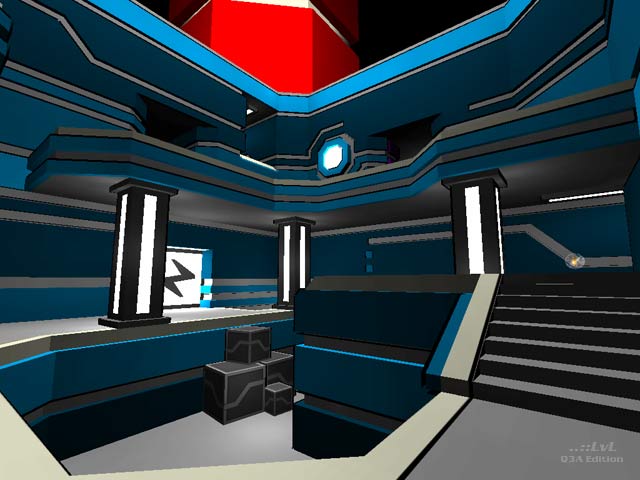 This is a tight little cell-shaded map with a central multi-level atrium and side areas that wind around it. Rocket-jumping skill will give a player a significant edge here as there are many useful rocket jumps, and the red armor appears to be inaccessible without one.

The texturing is in simple gradients in red, purple, light blue, and olive-green, each color indicating distinct areas of the map. Polygon counts are reasonable. Bots play the map better than typical, seeming tougher than usual for a given skill setting. Interestingly, the map completely lacks bouncepads, with a few teleporters and a plat to provide means of ascent other than stairs (and rocket-jumps!). Team deathmatch is supported, with location markers, though 3 on 3 will get chaotic and more is definitely not recommended. Almost perfect for 2 on 2, but weapons sometimes get scarce with even that many players.

Most of the stock q3a weapons are to be had, save the BFG and plasma gun. The lack of a plasma gun strengthens the railgun somewhat, but the winding passages and various obstacles, plus nearly every encounter involving multiple height levels, tends to counter it.

Gameplay tends to involve the vertical a fair bit despite the lack of bounce pads. All the included weapons prove useful, though the rocket launcher tends to dominate, partly due to the inclusion of two launchers and some additional ammo.

A nice touch is the assemblage of crates in the bottom of the atrium, where the name of the map can be seen written on some. This area contains the only slug ammo to be had other than by grabbing the railgun itself and can be a deathtrap if you're caught down there by someone spraying rockets or grenades around. Putting the railgun itself there and having no boxes of slugs might have been interesting.

A good map with good looks and gameplay and only a few minor flaws. The plat sound is included, but the console messages indicate the game tries to load a skybox that it can't find. The resulting pitch black sky doesn't look too bad, though, since there's some large colored pillars outside the map to relieve its monotony. Bots sometimes jump down the ventilation shaft with the megahealth, teleport to the top, then jump down again; you can keep blasting them in the back with the shotgun each time they teleport back up until they die. The teleports themselves just look like recessed walls with lightning bolt symbols on them; some rippling or glowing/pulsating shader effects might have come in handy here. I actually thought these might be doors at first, until I walked up to one and found myself halfway across the map. The quad spawns in tournament mode and there's no spawn marker texturing at the quad or weapon spawns.

For some reason, Team/FFA fighting tends to concentrate at times into the green T-junction where one of the rocket launchers spawns. More commonly, it concentrates where you'd expect - in the main atrium where the quad, lightning gun, and one shotgun spawn.

Dominating the bots is easy on lower skill levels as they will not RJ to the red armor and sometimes go for a dip in the pool of water in the purple area, where they're rocketbait and good for railgun target practise too.

Tigs notes: This is a re-worked version of an earlier version of unbalanced, also by acid 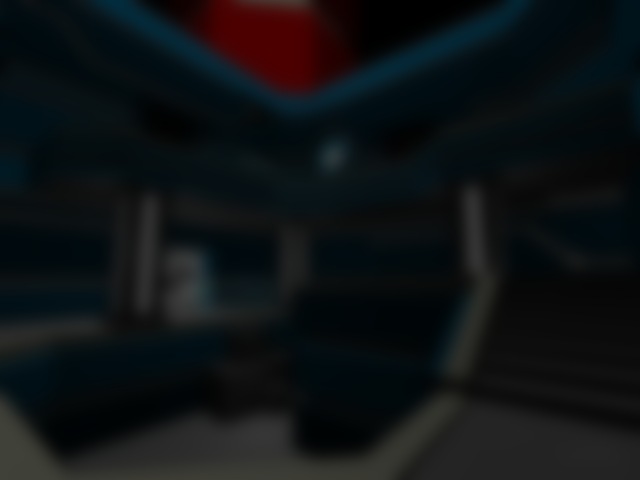