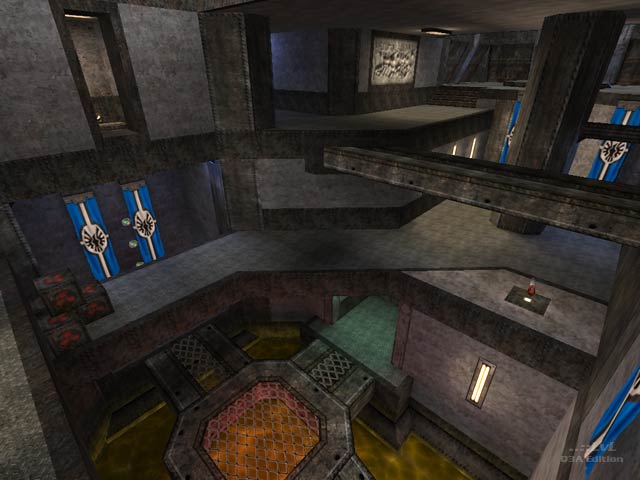 Soap on a Rope is a CTF level created by cuirass and optimised for play in Challenge Pro Mode. cuirass makes use of the Vendetta and Single Malt textures by Kevin Johnstone (Rorshach) and an arena file is included. Sadly the level does not include bot support (see below).

Each teams' base is identical in layout and features either red or blue banners in addition to wall-mounted torches that identify the respective bases. Each team has been given Regeneration and Mega Health as well as 2 lots of Yellow and Green Armour. Weaponry for each team includes 2 x Rocket Launchers, 2 x Shotguns and a single Rail Gun, Plasma Gun, Lightning Gun and Grenade Launcher. The Quad spawns in the centre.

A lot of work has gone into the brushwork and texturing giving the level a professional feel. The layout and design is exceptional offering alternative paths on the flanks of the central path and some lovely twists and turns as you approach the flag.

Much thought has gone into the trick jumping aspect available in CPM and is nothing short of outstanding in terms of the maps connectivity and accessibility. There are rafters to strafe across, trimmed landings to double jump off, rock outcrops, crates, ramps and stairs.

Haste is a more desirable power-up to fight for on a CPMA CTF map especially considering the 2 jumps requiring the highest amount of acceleration are found in the courtyard areas where a barrage of firepower will surely rain on your parade. Scouts and flag carriers should have no problems building up speed and flow but watch the lower-level exit to the base; the steps leading to the door can slow you down.

Other than the absence of a bot file, my only gripe is a lack of ammo clips in the team bases. The Grenade Launcher has none, Lightning and Plasma Gun 1 a piece, and if you are carrying the shotgun you will not be left wanting for ammo. There are plenty of empty spaces (the lightning gun room and its surrounds for example) to stock these items without cluttering the map. While it is understood with a large player load the lightning gun will probably be camped on at the lower entrance replacing a RL clip at the quad with 1 for the LG will allow a player moving to the enemy base the opportunity to go forward without changing weapons. The LG, PG, GL will all feel the drain in the author's expected larger player loading.

There is also the dubious placement of a GL with YA up top. This will encourage camping and spamming from this spot. I would suggest moving the armour down into the base along with some ammo clips for this weapon which will be useful when strafing across the rafters as well as useful in defence when this weapon is taken down for back up in twists toward the flag position.

The author suggests upward and over of 5 players a team for this map. As it stands the map is not large enough to hold anymore than 5 a side comfortably and taking into consideration the ammo problem, 3 would currently be the max. And they will be carrying the SG, RL & RG. A few more health balls would help fighters not carrying the MH or Regen.

An exceptionally designed CTF map that is highly playable but a little more ammo please. Definitely worth the download for people running CPM CTF servers but if you can, hold out for an updated release with more ammo. Well done cuirass. 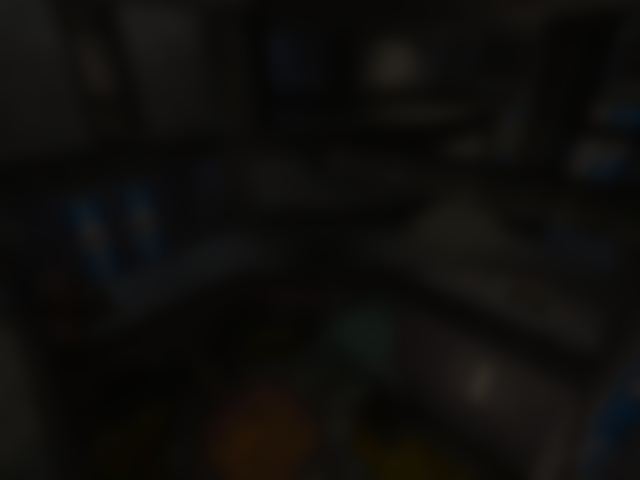