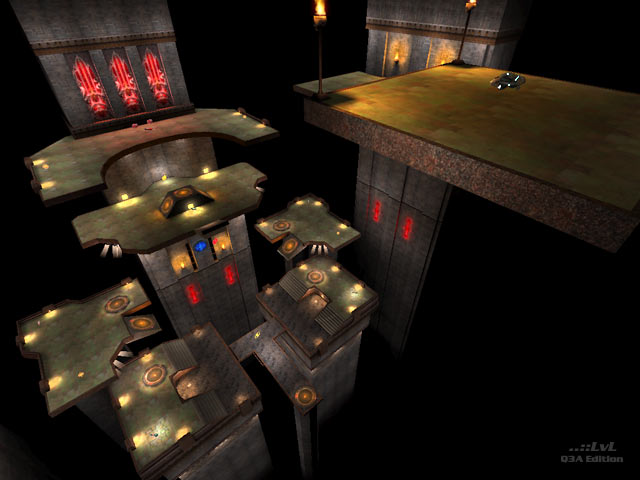 The pack consists of 13 maps. With the exception of 2, they are all space maps. The maps are not overly large and for the most part use standard Q3A textures with a few custom features included to spice things up. The maps play just fine. People with low end systems will not run into any problems playing on them. An arena file has been included.

Combat centres on the RL and RG with varying combinations of SG, LG, and PG. Several maps also include the GL; not usually worth including on a space map. The GL does work effectively on Zion's Quarry (an asteroid cluster by Brian Ball) as a close range weapon and as a top down spamming device on Asylum (Sean Soucy); a level which is reminiscent of The Brimstone Abbey (Q3A). The BFG also makes an appearance in Shady Towers (Jay Wilson) along with 2 RG sniping platforms flanking the main arena. The author has been thoughtful enough to not include any ammo clips for either of these weapons.

Mynx, Crash, Visor and Ranger are the resident bots on the majority of maps but are far from ideal for space maps and will be easy to pick off even on nightmare. To fix this problem I loaded the maps with Bots that played well on space maps, were good with the rail gun and would take the power ups. Major, Xaero, Sorlag, Uriel, Hunter, Phobos, Anarki and Keel all served their purpose on the appropriate maps. For the most part these bots played fine but there are several maps where bots won\t go for sniping points or power-ups because they are unable to recognise the jump combinations or drops required to access these areas. In this respect, there are too many power ups for play against bots on most of the levels.

The power-ups take on a greater significance when playing against humans. Shady Towers not only features armour but also a medikit, quad, personal teleporter, megahealth and a haste/invisibility spawn point. The teleporter-invisibility combination is invaluable for gaining access to the MH and Rail gun sniping areas while either haste, invisibility or personal teleporter will help players who are avoiding attacks from combinations of Quad, BFG and sniping. This over-abundance of power-ups is reflected most notably again on the map Have A Banana (Jesse McCree); which also focuses on the setup of defensive and offensive power-ups as part of game play and Impossible Dinosaur Battlefield (John Schuch) which is a true combat arena in the purest sense. This map features a solitary RG exposed from all sides on a lower central platform. Several maps demonstrate a greater subtlety in the use of powerful items including the onanistic Circle Jerk (Aaron Halon), Carbon (John Spitzer) and Reduced Fat Wheat Thins (Sean Soucy).

Stomping Arena (Alex Mayberry) is hampered by poor item placement but advanced bots will take and use all the power-ups on this map including the booby-trapped Quad (requires a personal teleporter) and MH (which played against humans wont even be touched).

Also included is a CTF version of Monochrome (John Spitzer); a map with no health, armour or power-ups and where all players spawn with the RG. This could have been left out entirely as it plays just like a CTF map would online with humans - a no teamwork FFA affair but with flags on it. The death match version makes for a real challenge.

Due to the mainly symmetrical nature and design of the maps they are all well suited for 1 on 1 and/or instagib mod play but due to item placement are not intended for competitive use. This pack is a lot of fun and worth the download, especially for space map and instagib fans. 2-8 players recommended. 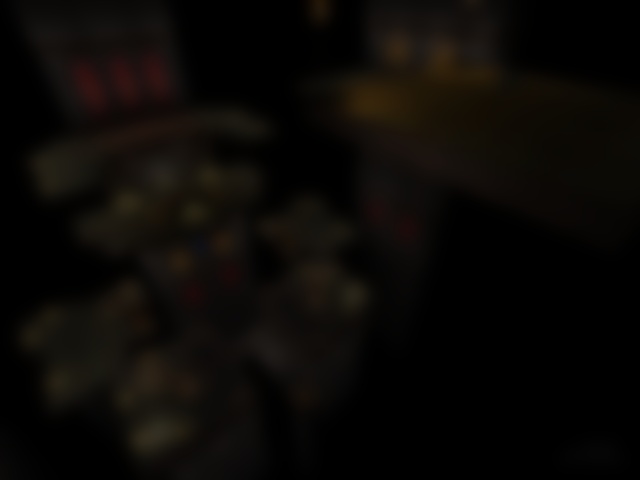