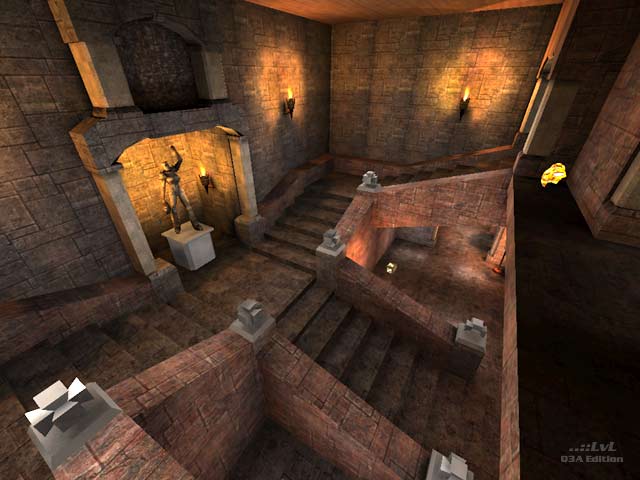 Another Quake dungeon type Gothic offering. Strafe-jumping across the hallway onto the chandelier over to the other side was great fun! The payload should be watched with this one, as ammunition is on the sparse side. The lighting looks great in the main hallway. The rest of the map was a bit of a let down at justifying that grand main room. A 4 man FFA was the order of the day. Bots play well and will take the Regen. If you get the time read the authors read me very funny!

Based off Monkhell by Slater. The map is big, arranged with lots of rooms loosely strung around a central large room containing the Quad. The architecture seems disproportionately oversized and is weird to play it. There are some simple things in each room like pillars which hide the plainness of having rectangular boxes for rooms.

When run in vertex lighting mode, the map appears full-bright. With lightmaps there are some shadows. There has been no attempt to light it interestingly. The Terra-cotta brown textures do not help either.

Weapons are widely separated and there is very little ammo. Items are often placed a bit out-of-the-way. There are two powerups, Quad Damage and Regeneration, which are separated by a reasonable distance. You do not get players controlling both, but since the architecture is simple if an opponent with the Quad chooses to chase you, it may be difficult to hide or effectively run away.

Bots play well and seem to visit most areas of the map. The map also has some interesting parts, including an underground crypt.

Overall it's an overlarge map, with slightly confusing layout at first. 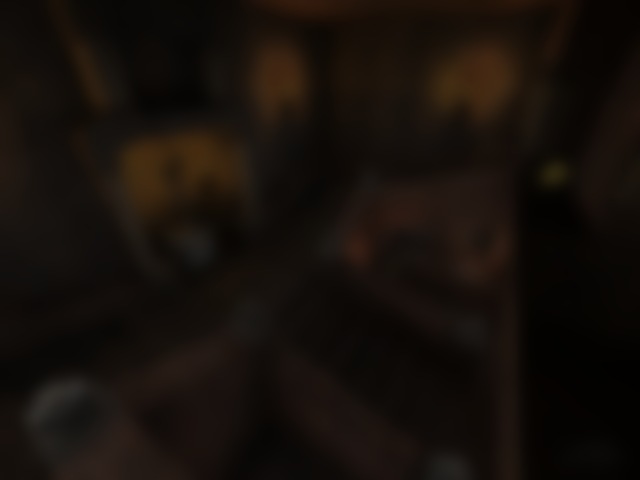