An attempt at a symmetrical cathedral map in the gothic theme. It's the author's first release and it shows. The layout is made of an external courtyard before a tall facade, into which two very long corridors lead to an end jump pad.

This is the only access into the cathedral interior, which itself is made of only one high-ceiling room. Two more corridors wind round to the front where accelerators propel players to ledges at the very end of the courtyard. The ledges contain a Megahelath and Haste plus some minor items and are otherwise inaccessible except by rocket jumping.

Game play generally involves traveling by this route repeatedly. Items are ill-balanced. The courtyard is expansive, with only low steps for cover, and contains no health. Inside one distant corridor, two 50 Health orbs sit in adjacent alcoves. The other corridor contains only 5 Health balls, in every alcove.

Texturing is odd, and one light texture is entirely missing. The lighting is perhaps the most objectionable aspect; the courtyard is essentially fullbright, while the interior is swamped in blood red. Two upper corridors are so dark that moving through them is always difficult.

Several map objects are used, none of them are clipped. Bots play okay, but often become trapped above the j-pad, and rarely acquire the powerups. 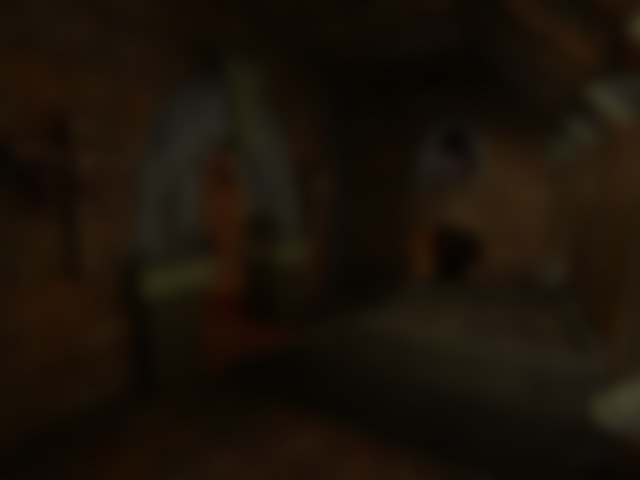