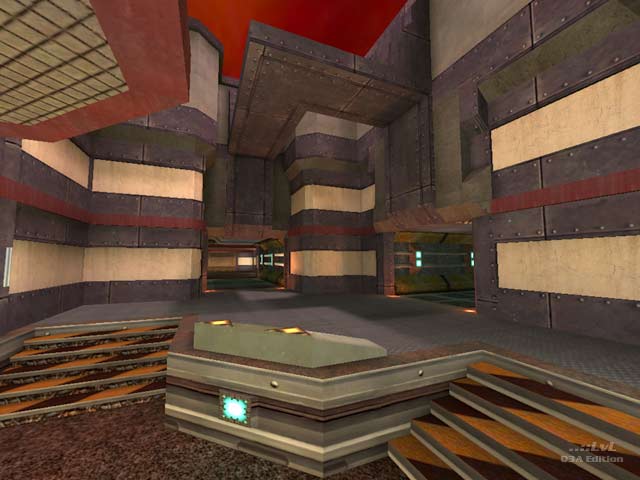 For a map that allegedly took 12 hours to build, I am rather impressed with the style the author cooked up. Orange floor lights smoulder along the base of the corridors and yellowish trim lights mark out the split levels in the main rooms. The textures are heavily industrial. The overall effect is reminiscent of 'Alien 3', but with much more detailing. The layout is basically a square circuit, with two adjacent corner rooms mirroring each other. Both are very small, and contain yellow armour behind a rather stunted accelerator pad. Each leads to a tiny platform containing a Plasma Gun and Grenade Launcher respectively. Above each on a rusted girder spawn a Quad and Haste, accessible only by rocket jumping. One of every other standard weapon is available, plus a Red Armour in a basement tunnel. Other items and weapons are placed overhead on a series of short catwalks, so close to the floor below as to almost touch the player box. Jump pads in the larger two rooms provide swift access to these. The circuit breaks at one side into a rocky area wherein sits the Megahealth and Lightning Gun. Lack of clipping allows rocket jumping atop the crags, next to the skybox. Good quantities of ammo are present, particularly next to the PG and LG. Combat relies mainly on a 'guns blazing' approach as players traverse the circuit from room to room. The strong combinations of light and texture sometimes obscures players in the distance, making sniper tactics difficult. Bots are tough foes in the areas they can reach, but use the lower altitudes far more than the upper. The only circumstance under which they gain a powerup is if you die whilst carrying one. 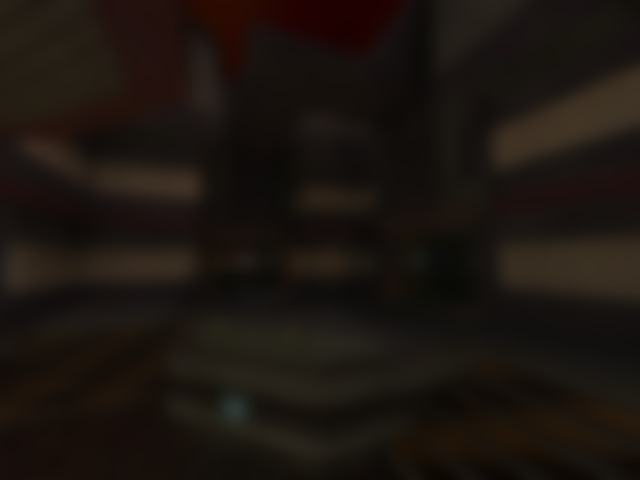