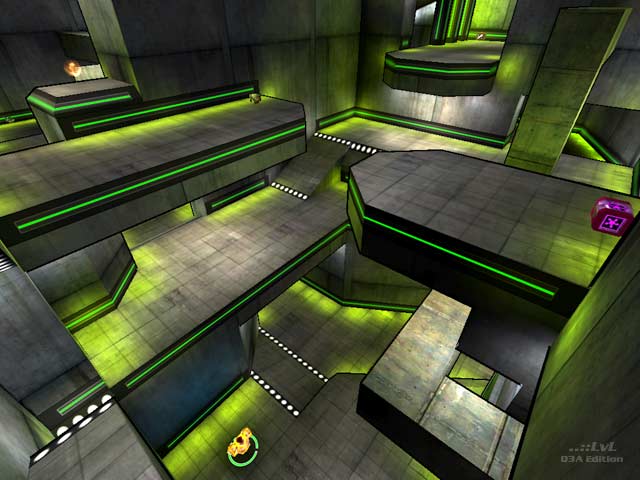 Clean looking walls and floors are trimmed with neon strips and little white lights everywhere. Aesthetics in acid's Chlorophyl are simple, yet unique. It took me a second to realize the geometry is cel-shaded, which is used nicely as a subtle feature rather than being overwhelming and obnoxious, as I find it so often is. It is all topped with an amazing starry skybox featuring a planet whose colors are (suspiciously) on theme. Executed perfectly.

The layout, provided by blemish and ekse from the Warsow mod, has no significant issues for regular Q3. The level is small, and probably best for two to three players, or a four player TDM. There are no bouncers, just teleports and ramps which I'd assume would make good use of Warsow's ramp slide maneuver. Despite the absence of bouncers, there is plenty of vertical action. You will have to make your way up to top level if you wish to survive.

Where this level goes horribly wrong is in the item placement. The size is characteristic of a standard tourney, and yet there are two RLs, two PGs, and one of everything else except the BFG. You will be tripping over weapons and wondering which one to use. Health, armor, and powerups are equally excessive including a Quad, a RA, two YAs, a MH, four 25 healths and a 50 health. I also found that the half of the map with the Quad overpowers the other side severely.

I'm not sure what the author was trying to achieve here from a gameplay standpoint. Perhaps all these items were meant to make the map more adaptable for extra players, but it just does not work. It makes no sense for the layout to support two to four players while the item placement is better for four to eight. Gameplay with any player count is compromised in one way or another.

Despite its poor entity placement, Chlorophyl still manages to be very playable. Visuals are top notch but simple enough to run on any system. It might get old fast, but it is still worth checking out. 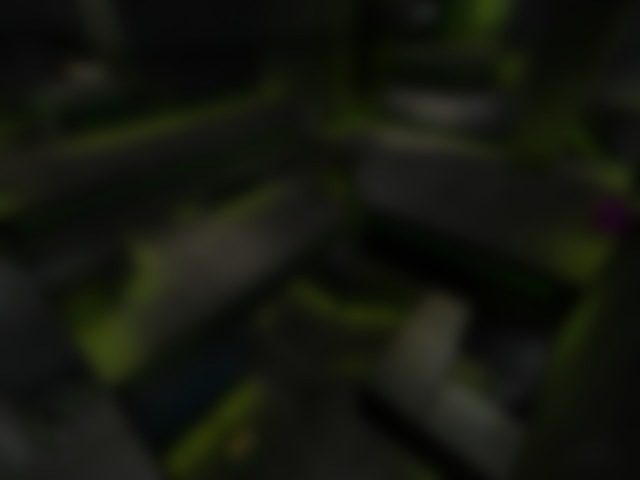