**Preview only**
Be sure to submit your comment
Submit
Preview
Cancel
Submitting comment...
Bomerlunder unregistered
#13   28 Sep 2000
Okay, I will give you a comment on your map, after I downloaded it. Well to the first 7 points, I agree and disagree with you because it is all a matter of like and dislike. I explain it to you, for instance the red fog I thought it is cool because you can take a look over it, if you jump. so my idea about this one was a chance to hide and to take out your enemies that follow you into the fog. But it seems that not everybody is sharing my opinion about the first 7 points, so thanks for your comment on them. But the 8th point is NOT my fault, because I used no caulk there! You can see through the walls because of the sky texture and not because of the caulk! This is something I read some time ago in a tutorial you have to watch out where to put a skybox-texture, for example the windows in the 3. stage, you can see through them the little roof I built, it is kinda strange, I haven't changed it because I thought there could be a solution for it, but there doesn't exist any solution for that, I tried it!! Okay, now I will download your map...
Agree (0) or Disagree (0)
GONNAKILLYA! unregistered
#12   28 Sep 2000
P.S.

Does this mean you'll comment on my map, MonkeyMadness?

Anyway. The map wasn't bad for a first map. Of course there are several things you could have done to improve the map but since it's yer first....I'll give you lots of slack!

I agree with the reviewer and warmachine...the red fog on the lower level shouldn't be there....too thick to see thru.

1) The ramps going to the teleporter seem a bit too steep to feel comfortable.

2) The teleporter platform itself could have been a bit larger...all brawls in that area ended with the combatants falling off to the basement.

3) The extra rocket launcher and lightning gun (the ones near the center area and NOT the ones in the little hallways) seemed a bit out of place. I think if you nuked them and kept the RL and LG in their respective hallways, the map would work better.

4) The map seemed kinda smallish and cramped somehow....even in the open center area. Maybe if the map was a little larger on the whole, it would have a better feel.

5) The highest hallway level seemed kinda barren with the green healths and single armor shard in each of the four corners.

6) Their was a bit too much ammo on the lower level.

7) Texturing could have been a little better....it seemed kinda bland but you probably already knew that.

8) Near the Quad...those two windows...you can see the caulk texture on the outside of the walls allowing you to see inside the map from there...I've seen this mistake on a lot of maps, even those new Rocket Arena maps. If you can see any other part of the map, it should be either textured or clipped off so you can't see it in the first place.

That's it for now.

Again, for a first map, not a bad start.

You'll only get better at it! 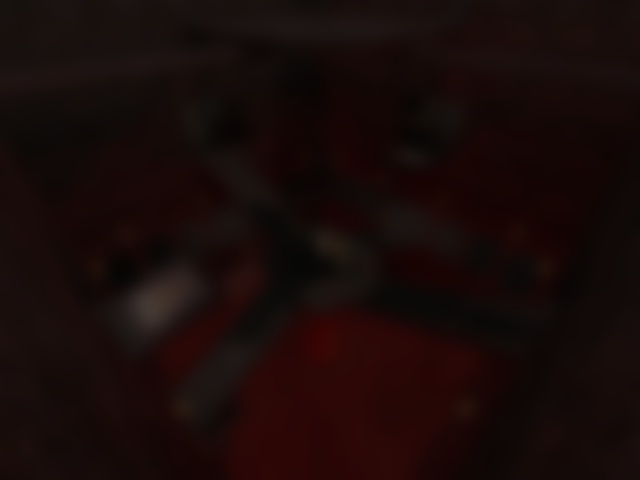