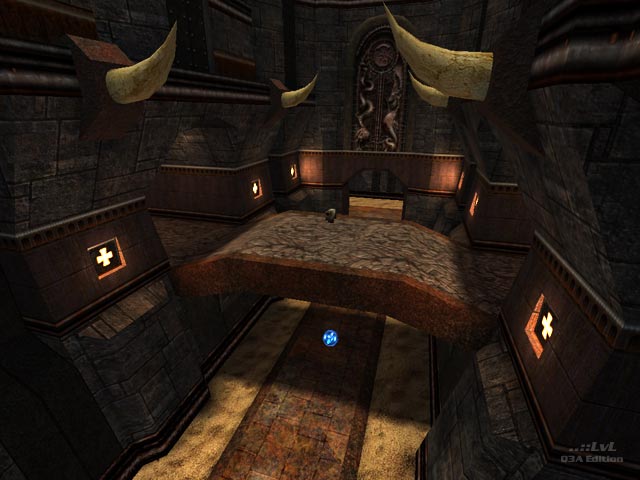 FragTastic Rep. 2241
#31   16 Jul 2012
Terrific work Mr.CleaN I love your maps very much.
Agree (1) or Disagree (0)
=DarkSprout= unregistered
#30   18 Mar 2009
This is a fun little map, the one issue you must bare in mind, is that it uses a lot of the default textures from Q3A, and therefore in OpenArena it is mostly white grid lines (missing textures).
You will somehow have to get a Q3A texture pack (Which I haven't managed yet).
Agree (0) or Disagree (0)
LGD*Foralarx unregistered
#29   13 Jan 2006
I've kept this one, along with Bitter Embrace (also by Mr Clean). Both maps are awesome, but for me this one was the best.. The atmosphere of this map is breath-taking. I enjoyed many games on this map over the years.
Agree (0) or Disagree (0)
not entered unregistered
#28   08 Feb 2001
Those edges drive me nuts.
Agree (0) or Disagree (0)
-sharky- unregistered
#27   09 Oct 2000
Yawn. My friends and I found this map rather boring. The strange edges on the ground makes it a little hard to move. More upper level bridges, platforms and ledges would add much needed variety.

BTW clean this is flippin mad.

Agree (0) or Disagree (0)
GONNAKILLYA! unregistered
#17   19 Aug 2000
Beautiful map! Wicked layout, wicked connections, wicked colors. Way on the freaky side not hearing running while on the "sand?". I didn't quite get the horns in the mega health hallway but it made jumping from one side to the other a little easier!

There are sounds in the map, though they are very quiet. As much as I enjoy building the ambience with the use of good sounds (and I have always been a proponent of such), this map (as well as Heavy Duty) were aimed at competition tournament play. The competetive players (at least the majority that I've asked) prefer little or no ambient sound in their maps, as it makes it more difficult to hear item pickup sound cues.

I've got a teamplay comp map slated next, but after that I will probably do a general FFA map, with all the ambience I usually use. =o)

Agree (0) or Disagree (0)
SiCdeth unregistered
#15   17 Aug 2000
it heavily(no pun) resembles heavy duty. the style(darker gothic) is a lil different but thats the first thing i noticed once the map loaded. havent played it with bots, and im sure it will play fine. the levelshot is a lil big and when i press the > button to cycle through maps it takes a lil longer to show the page with this map on it.

good layout and design (obviously..its mr. clean were talking about) but its a little boring since theres no sounds or anything, and whats the deal with all these pro-mode maps? pro-mode kinda sux anyway (imo) but hey whatever.. keep making good maps and ill keep my mouth shut. good job.

Actually, there is more to the skybox, you just can't see it because of the height of the walls. If you /noclip up you will be able to see more of it.

as you can see I found 0 faults with your map.

Nit picky shit dont count in my book. Either the map flys or it dont.

As far as the sky texture you made.

Did you know that there is one already in quake 3 that only needs one change to it and it could look nearly exactly like the one you did?

its in there trust me.

thats what I thought you did.

And the tellys do look like water or fog or something along those lines. I mean the big red symbols are a big ass hint but I missed them and looked at the wall moving and couldnt figure it out right away. ha

Im sure it was just me though.

I didnt find any faults with your map though.

You did a damn good one and its the kind of thing Im glad I saw because I need to see good ideas that work like this. You shouw skill and a great lay out with 0 stupid tunnels! NO CRATES!!!

-First off, the sky texture is 100% original, rendered with Bryce4 by yours truly.

-Second the sand textures are NOT from UT. The plain sand texture is the one I made for Kihaku (t8dm5), and it was made from a digital photo of sand (imgaine that!)The bloody sand is simply a variation, which i also did.

-The teleports use the same purplish cloud texture that I made for the tele's in Heavy Duty (mrcq3t3). This is the first time I've heard someone say they thought it looked like water. I designed the tele's to resemble the Q1 slipgates, but with an updated, more Q3-ish texture.

-Trust me, I give credit where credit is due (and I expect the same when someone else uses the textures I have created and released). If I had used someone else's skybox or textures, I would have said so in the readme.

Agree (0) or Disagree (0)
4Fuxache unregistered
#8   13 Aug 2000
splendid use of the "no footstep" sound brush [or what ever the mappers call it] on the floors, somehow makes IMHO the level seem bigger than it is when your opponent suddenly pops ya in the back haha. A keeper for sure
Agree (0) or Disagree (0)
Castle unregistered
#7   13 Aug 2000
oh god.

I have seen the work that Mr clean does before. (very nice)

My first impression was really strange because for some very odd reason lvl guy started talking about the sky texture!? This is only the second time I recal this sort of thing ever happening.. As far as I can tell by looking at it .. urrm

some one placed a black thing over one texture in the sky box that was already in quake 3 anyway. clever yes. Worth mentioning in the short paragraph thats normaly used to talk about how the maps apperence effects the lay out? Id venture to say not. Something must be strange

about this map I think. SO I walk around.

very well made and all that...

In fact the map is so well done that nobody not even the lvl guy DARE MENTION ANYTHING about the telleports being a tad odd looking. I walked over to some water on a wall squinting my eyes and I was unable to understand what the fuck was going on until I walked into it. then a new world was opened to me. The water thing moves you places! Cool

In fact the map is so well done that Nobody even wanted to mention about how the shot gun is just sort of sitting in the sand alone. (I know its fucking gay to hit a mapper with the fucking weapon looks out place card though. Its quake 3 map damn it!!)

But maybe shot guns are happyer when they have a little pedestil sitting under them. come on man keep your guns happy!! Neat blood stain =)

Im gonna fucking call epic up and tell them how you stole there damn texture you evil bastard!

hey hold on a minute?

did you go and put the detail texture on over lay in photo shop ? er maybe you some how converted the S3 version?

thought you can get away with it did you.

Ah who am I kidding.. all fucking sand textures look the same..... although that DOES look like the UT texture.

And if it is your going to hell in a hand baskit because ... um... For no real reason at all.

Also people note the cool rocket jump spots in the level. They counter point the underlineing art of camping your ass off. Mr.Clean you have every one but me eating out of your palms right now. the lvl guy was so dumstruk he found himself blabing about the sky texture you put together in five minutes with photo shop.

You the man my brotha

Your like the Shaft of map designers right now.

You go put the smack down mutha fucka

Agree (0) or Disagree (0)
Octovus unregistered
#5   12 Aug 2000
Good map, I give it an 8. As I've said, I'm not much of a tourney man, but this map does tourney and FFA well. The strafe jump to the RL is extremely useful, as going all the way up the stairs is a sure way to get yourself killed if an enemy is nearby.

I played an FFA with bots, and a tourney with two people, and both were good fun. The bot's like the tele's a bit much though, and once or twice one would decide to go back and forth continously. The RA was very out of the way, and I know this is intentional, but it was probably to extremely so what with only the SG nearby.

This might be a little better in CPM...but I've said my opinion of that b4 (and yes, I have given it a whole hearted try..all be it at knifepoint from one of my better quakeing buds ;) )

Tele's are a little in-obvious, and the RA area is a little weapon-sparse for such a central item, but generally good show. I'd swap the LG and SG placements.

Another good 1 from Mr. CleaN!

Agree (0) or Disagree (0)
hhmz unregistered
#4   12 Aug 2000
Brilliant!!!!
Agree (0) or Disagree (0)
Johnny Law unregistered
#3   12 Aug 2000
This map is a bit different from the DFA atrium duel maps, but there's still some nice two- and three-level action in spots, an interesting layout, and good solid structure. No railgun in this one. Looks like it will be an intriguing map if you're up against a smart human opponent... bots cover the map well but their dumbness about duel tactics is fairly apparent here.

Definitely give this one a try, it's both slightly different & high quality. For those of you who want to try it on the net, it's one of the votables at the Mothership duel server (see LvL's server section for details).

Agree (0) or Disagree (0)
RedFive unregistered
#2   12 Aug 2000
CPM or not, this map is great for 1v1. Just big enough so you have to look for your opponent and it gives you room to retreat if you need health or armor. My only gripe is that I find it a bit dark and a model with a dark skin can hide too easily, but in tourneys nobody has a camper skin, right?! So here's a 9 for Mr.Clean's work.
Agree (0) or Disagree (0)
Corrosive unregistered
#1   12 Aug 2000
Great map! Especially in Challenge Pro Mode. 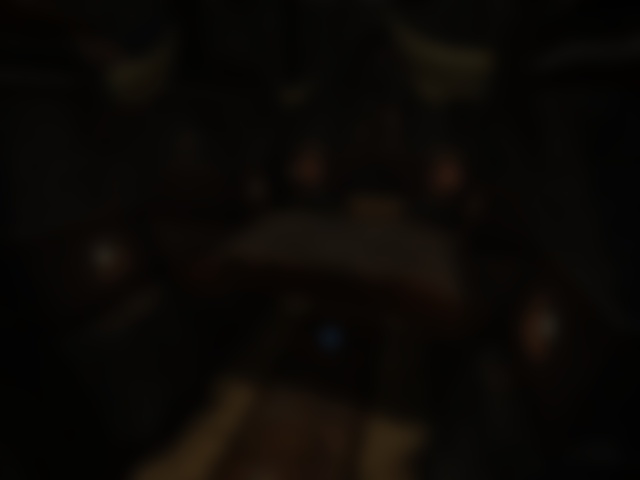