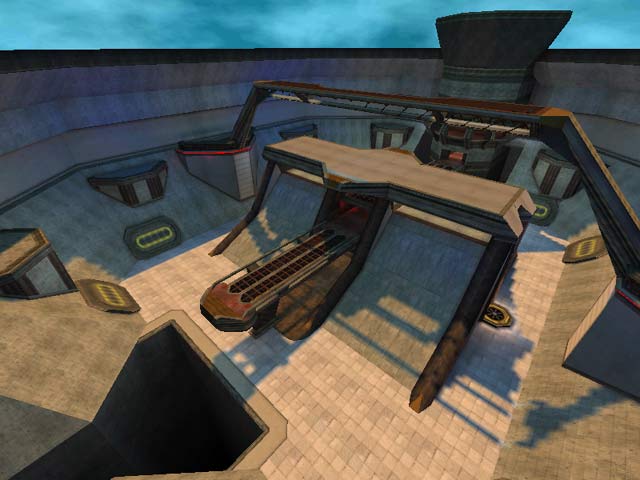 Redmeat and Darkmeat don't appeal to me so that's the only comments I'll make on them.

Whitemeat is excellent and probably the best of Parisi's maps. Visually wonderful. Bots aren't the greatest but playable. This map is really for DM and there's plenty of options and opportunities here for great play. I'd question the placement of one launcher but that'd be the only very minor nitpick I'd have with this map.

Agree (0) or Disagree (0)
Rotary Fist unregistered
#64   06 Nov 2004
these maps are real arenas - shape and placements in the map are made just for gameplay. And playing this is really fun, even with bots, great for Bazooka Q3 or Akimbo modes. MeatPack will stay on my pc for long time ;]
Agree (0) or Disagree (0)
Nitebeat unregistered
#63   27 Jul 2002
man what the hell is up with the bots in "whitemeat"...

p.s. cheak out his other maps there cool to!

The departure from traditional styling is refreshing. I hope Mr. Parisi is working on more maps of this top-notch nature. Maybe Meat Grinder, Pounded Meat, and Grilled Meat??? :-)

Agree (0) or Disagree (0)
Stan The Man unregistered
#44   22 Apr 2000
Beautiful. Just beautiful. I run a weekly Quake game and just can't wait to show the "Guys." One thing a lot of levels forget these days past the the gameplay is what I call the overall art direction. Yes gameplay is a must but to have the look that went into these levels is the sign of a truly talented individual. Great Job! Look forward to your next ones.
Agree (0) or Disagree (0)
Redrum unregistered
#43   20 Apr 2000
Simply spectacular. Got a job yet?
Agree (0) or Disagree (0)
Gibbs unregistered
#42   17 Apr 2000
White meat is perhaps the best mod level to date. I get so sick of running around stone dungeons. The bright blue sky and cool grey concrete rock! Dark and Red meat are swell levels too. Way to think outside of the box dude. Do we have a release date for Meat Pak 2 yet?

Just a thought to all you mod makers out there. How about some off world levels. Example: maybe an Icy Canyon or a level set high in some Alien Trees or maybe on an Astroid where you can jump form rock to rock and the sky could be a awsome swirling black hole. Just a thought.

Agree (0) or Disagree (0)
none specified unregistered
#41   13 Apr 2000
These maps rule! As I was checking these maps out I just kept being amazed by the originality and inventiveness.

I especially liked the angled walls. I really can't touch the surface in this little box but just above every aspect of these maps creates depth.

A batch of well designed levels, I can't wait to more from this guy.

Agree (0) or Disagree (0)
judas unregistered
#40   13 Apr 2000
It's great to see someone doing something that's not only truly different, but actually works really well! There are loads of great levels out there, but far too many are come from the traditional DM mould. Frame rates are fine with me (P3-450/256mb/TNT2) - or as fine as they can be on an NT machine :-/

These maps will be staying for a while yet...

Shame about the bots though :-(

Sure, these levels deviate from standard types, and in many ways, it's this that makes them great. But it's no reason for bots not to play the levels well. In many ways, the botsaregood, but they just fail to utilise the whole map. A few of those 'weights' for the bots would change this completely.

The thing is, the bots do trigger the buttons on redmeat - random file makes that definite. So it's still risky grabbing the BFG. The botsdo(sometimes) go to the RG plat in whitemeat, and quite often get up to the BFG etc. It's just that they fail to utilise the whole of each of the maps to the full.

Not everyone can get online for a good bit of dm, and not everyone has enough players on a LAN to make it worthwhile. They do play (they rarely get stuck anyway), but tweaking them would make turn these from great maps intothemaps

But hey, what the hell. Just keep making these great maps for us :)

I love all the meat levels, even with bots, but the redmeat map has me stuck. An awesome pack and well worth the download.

Agree (0) or Disagree (0)
MEAT unregistered
#37   11 Apr 2000
Hey everybody, I would just like to say thanks for all the cool comments. I totally appreciate it.

As for the comments about bots not playing properly on the levels, I just have to say that these levels were not made for bots. I did not test them for bots. People don’t realize that it’s not the level designers fault that bots don’t know how to do certain things. I think ID did a pretty good job for doing death match AI in traditional maps with hallways and rooms. But in levels that deviate from the traditional death mach type level they don’t work very well. I think it would be pretty boring if everyone out their made levels that looked and played just like the Q3 levels.

Meatpak 2 Should be ready pretty soon. Even more maps that don’t work with bots. I have 2 dm levels done and 1 ctf level done. And I have a web site, bademat.com that should be going live shortly that will have info about the meat paks and other projects that I am currently working on.

These maps rock. And they all run slick on the three machines here. Two of them are well under the specs people are mentioning here. And while the Bot support is sketchy, I can fill 'em up with multitudes of bots without trouble. On a LAN, just dreamy...

Redmeat is great, but the bot pathing is, well, below average. If that could be improved, this woiuld be an absolute kick-ass map. Good for Domination as well.

Darkmeat is really cool, but again, pathing is dodgy.

All in all, pretty damn fine

best. I think that whitemeat

would be an awesome rocket arena

map. Darkmeat was a little strange with the bots but that's

what friends are for. Pete kicks ass! Keepem comin' }:-)

but gameplay is too slow for me.

Whitemeat is even fun playing on yer own :-) but Redmeat really kicks some major butt.

Keep up the good work Pete!

Its a well designed map, and i like the way the BFG is not respawning constantly. Also has GREAT use of curves and textures are interesting.

However and its a big however, the framerate just bites. Maybe its me but I dont like maps that run at half the speed of id's Maps.

I dont know whether the maker just owns a MEATY pc or what happened but on my P3450 with a TNT2ultra FPS where often hitting 20-25 and thats just a pain. Considering most run happily at 40+ this is just poor judgement in my humble opinion.

So in conclusion the maps fine the FPS are not make up your mind accordingly.

ONLY ABOUT WHITE MEAT

Agree (0) or Disagree (0)
Morgoth (not the mapper) unregistered
#19   03 Apr 2000
Yep, i agree with Twitch. The BFG takes AGES to respawn, there is no ammo for it, and (in red anyway), you can set off the BFG trap thingo (there's buttons to shoot everywhere)

Yes, they can slow down some computers.

But they ALL play great! White & Red are the ONLY maps I've seen that aren't COMPLETELY ruined by the inclusion of the BFG.

Well... it's THE ABSOLUTE BEST space map since Q3DM17.

Agree (0) or Disagree (0)
Morgoth (not the mapper) unregistered
#14   02 Apr 2000
I downloaded this map pack from q3center when it first came out, (at least a month ago) and i had a blast (still do...) IMHO, they are what space maps should play like. Sure the framerate sucks if there's any more than 4 bots in there (p3-500 128mb, TNT2). I enjoyed these maps MUCH more than ANY of the id levels. Playing against bots on Darkmeat can be fun (grab the RL & Quad, and run around in the 'ditch' at the side) Great maps. I hope to see more from this mapper.

Morgoth (Not the creator of Killing Grounds)

can any of you children who say something sucks just to get attention even fold a map, much less create one: no

At the moment this set of maps holds it's own with Mindfields and Coriolis Storm. It just requires higher-end hardware and about 12 gamers. The thought and detail are extremely high; looking forward to a map a bit more svelte from Parisi.

Psyko, stop being an ass: in all OBJECTIVITY, this pack is far from deserving a 0/10, even if you don't care for the gameplay... so don't be a grouchy little ass and unbalance the grading of these fine maps.

Agree (0) or Disagree (0)
sillysquirrel unregistered
#10   01 Apr 2000
I am getting great FPS with these maps. I have a OCed 300a celeron @375 with a TNT 1 and I get 30fps! Oh yeah my tnt is over clocked too. For me that is very good. As for the maps, very well laid out. It my be to big for 4-5 but for me it works. I liked Redmeat the best. It reminds me of the bouncy map. You will need skills to work it and very fast reflexes. Playing with 4 bots @ hardcore I had my work cut out for me. I gave them a 10 cuz I needed something new to play and the maps are amazing. I have beat all levels @ hardcore yet I cant beat a single nightmare lvl. Thanks Pete.
Agree (0) or Disagree (0)
Psyko unregistered
#9   01 Apr 2000
I think all of the meat maps are pretty much crap. There is little gameplay, and they are framerate killers.

I wouldn't say these maps are among the best in terms of gameplay, but they are "different" (mostly in good ways) and definitely worth a look. 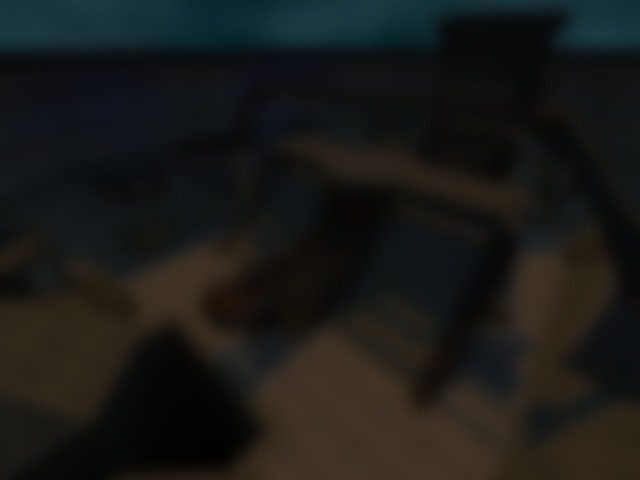