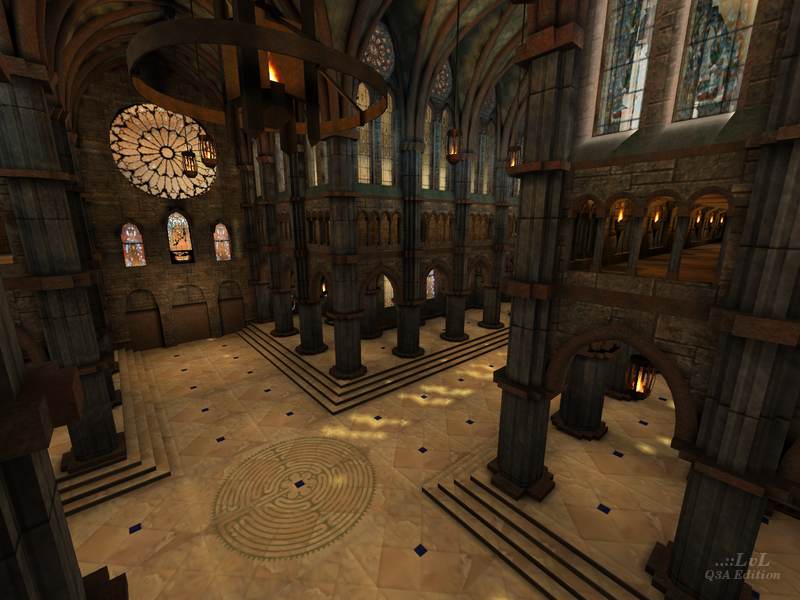 raspatan Rep. 4134
#24   17 Oct 2020
Great design, for sure. Gameplay is ok, particularly if you like pillar-based railgun fights. The map lacks items though. Better to go straight for no items and play it as instagib in my opinion. In any case, disagree with the review. This is not good enough for a keeper.
Agree (1) or Disagree (0)

Hooyaah Rep. 559
#19   20 Feb 2010
Visually stunning in detail, and a fine portrayal of the High Renaissance Cathedral Chartres, this map contains visuals that many mappers aspire to. Ostentatious stained glass and accurately structured corbeled vaults, supported by magnificent columns, are among the most striking visual elements. Game play is aided by well place portals so, I believe, that all should not abandon hope for this arena's playability for it is one that best lends itself to a DM or FFA with up to four players. One will have to compensate, adjusting a customary mode of tactical strategy, to a method that best suits this areas limitations and strengths.
Agree (1) or Disagree (0)
kogemyaka unregistered
#18   11 Nov 2009
Cool! Very nise map!
Agree (0) or Disagree (0)
di11rod unregistered
#17   18 May 2004
This map is a groundbreaking piece of Quake history. Great job, Kenny.

Too bad so many trogs are incapable of appreciating artwork. Hey, maybe they can give some lame tech base map another 9/10. rollseyes

Agree (0) or Disagree (0)
Gael unregistered
#15   03 Jan 2004
I think what the people slamming this map fail to realize is that it was never intended, AFAIK, to be played on. It was an excercise in recreating a real world location within radiant. I think it's gorgeous- very well done.
Agree (0) or Disagree (0)
*papri-K* unregistered
#14   27 Oct 2003
I don't know what happened to the score but it's screwed up, this map deserves the "top complexity architecture" prize.

I don't think it was ever ment to be looked at from the point of view of a 'death match' map and a massive frag fest, the author used the theme to test out some ideas that at the time were pretty whacky... we take them for granted now because of the work ydnar has done to q3map2... you really have to put this into context and remember this was made before that era and should really (have) be(en) looked at from that point of view.

Still a bit of a monster of a map regardless of the 'FPS' and 'game issues'.

Agree (0) or Disagree (0)
SquidKid unregistered
#11   24 Oct 2003
From the screenshot I was expecting the map to be along the lines of lloydmdm2, Ancient Archipelago.

However it seems to be the same scenery alover. Some transports fling you into the walls and the FPS is not that great. Too many bot's cause my system to dog down to unplayable speeds.

Looked good though, lost interest after about a half a round when the FPS just made play unbearable on my machine.

Agree (1) or Disagree (0)
Constantin the Great unregistered
#9   22 Oct 2003
...continued from my past litany: basically this map is the Britney Spears of maps. It looks good, it's bubble gum, everybody downloaded it and is afraid to admit it. All in all, overrated.
Agree (0) or Disagree (0)
not entered unregistered
#8   22 Oct 2003
I am wondering why the solid walls don't seem to block vis. Is this map all detail brushes except for the hull? Usually when you stand against a wall and look into it, you should see a substantial increase in frames per second, but with this map everything beyond the wall is still being drawn. Type r_lockpvs at any point within the map and you will see that everything is always being drawn even though it can't be seen. A simple noclip flight around the hull will show that even though this map is very pretty internally, the craftmenship is rather ugly. The author fails to use caulk textures at all, overlaps brushes and curves (zfighting), and fails to delete the inside of curves that get drawn but never seen by the user. Curves do not block vis, so anything behind them will display. It's no wonder this is such a benchmark tester with all it's construction problems and 0 thought put into performance. Basically, I give this map a 10 for looks and 0 for every other category including gameplay, fps, layout, construction etc. There is more to making game levels than what is visible by the user.
Agree (0) or Disagree (0)
Seremtan unregistered
#7   22 Oct 2003
Oops - sorry, I was right the first time! Many apologies. What can I say? It's late, and my brain isn't functioning properly.
Agree (0) or Disagree (0)
Seremtan unregistered
#6   22 Oct 2003
"This map gained a reputation as something of a benchmark level, with a low FPS" - that should be "high FPS". Why mangle my review?
Agree (0) or Disagree (0)
wviperw unregistered
#5   22 Oct 2003
confused. Why is this map just being reviewed now? I thought it was released (and reviewed) a long time ago...?
Agree (0) or Disagree (0)
tanyeli unregistered
#4   22 Oct 2003
There are some mistakes that must be adressed in this level. No, i don't mean the gameplay or the fps problems.

I mean the structural and architectural details in the Chartres Cathedral.

First of all, there is no elevation around the nave and under the smaller vaults.

Second, the apse is too small in the map.

Third the main vaults are probably on the half height of the original.

Fourth, the main hall is way too longer in the map than the original.

Fifth, the upper level archs above the smaller vaults are supposed to be "pointed" but it is romanesque in the map.

Sixth, the windows have not two, but two main and two sub divisions in the original and have single large rose windows and double small rose windows.

In addition to these, there are no lanterns hanging from the key stones of the main rib vaults, not only in Chartres but in any cathedral.

Now, I don't mean to be harsh, but I know that building a cathedral in Radiant is not easy. Especially if you try to build one like Chartres.

I have an unreleased Chartres project (with butresses, flying butresses, bell towers, stairs and roof) which is completed but not yet compiled and after taking so much fun time while building the Chartres, i think that there is no way on world to forget the details of Chartres for me anymore.

But I realize the map was made as an experiment more than anything else. Still, I'd love to frag in this map

Superb architecture, yes, true, but...uh...guys...uhm...how many space, church (and overkill gothic themes) do we need to see?! Oh, let's not forget Egyptian! Gee, all this technology at your finger tips and all you can think of is: gothic, egyptian and space?! AAAUUURRRGH!

Architecturally this map is mind boggling compared to others. Conceptually? You Quakers need to go out and find other buildings, topography, themes to work on! Stop playing Quake for a bit and go outside! Get some new ideas!

Game play? Uh...there's game play here? Where? Run, shoot...hmm...run...shoot? Now, where have I done that before? Oh yeah! Every other bloody map, minus one or two, on this damn website! Hello?!

Benchmark? Why?! Who cares?! If your video card can't run it, screw it! Throw your ancient box out the window and find yourself another hobby! Or, if you're so into numbers maybe you should become an engineer and do something more constructive with your time? Like, gee, why not apply for a computer game company?!

This map is fun for the first 4 seconds when you go oooh...aaah, and then, that's it, poof! Gone, that's it. Like premature ejaculation. 7 for effort. Concept 3. 10 for technical. 0 for ideas. 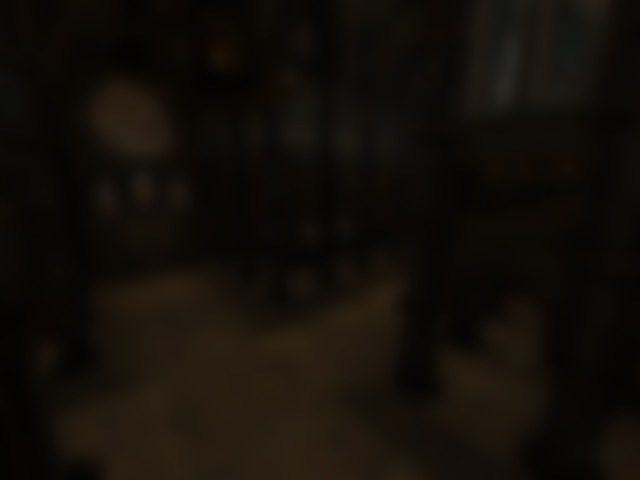