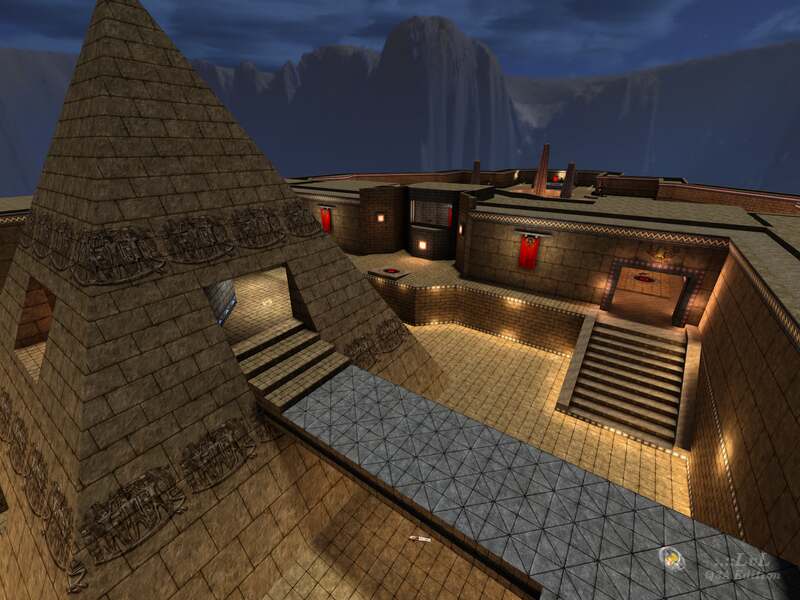 This CTF map is a collaboration between two authors. As the name suggests, the map is dressed up in an Egyptian theme. This is mostly realized by using the excellent Egyptian texture set made by sock, as well as the nice map models made by Todd Gantzler. Both are used in an effective way by the map authors. The center area of the map is built around a Pyramid structure, which obviously fits the theme of the map well.

The layout of the map is relatively simple. There are two large, open flag areas on either side which connect via three tunnels to the center area with the pyramid. Two of the tunnels can be used both as an entrance and exit. The upper, center tunnel can only be used as an exit. The center pyramid is hollow and offers an upper floor (with railgun and health) and a lower floor where the Quad Damage spawns (with some small health and armor shards). The area around the pyramid is relatively empty with few items of interest. This makes traversal of the central area outside of the pyramid cumbersome and going through the pyramid is highly preferred. However, having human opponents rather than bots who can actively block people from moving through the pyramid might change this dynamic.

The flag areas are wide open and would be very easy to defend using some well placed Railgun shots. To prevent this the authors cleverly built lower passages into the floor as well, like relative wide trenches. It provides protection from the openness of the area, but comes at the increased risk of getting shot from above by splash damage weapons like the Rocket Launcher. It provides an interesting choice for attacking players: do I stay out in the open, or dive down into a trench to avoid getting Railed from a distance?

There are plenty of armor and powerup options in the map. Both flag areas include a Red Armor, a Yellow Armor and a Megahealth, and both sides have tunnels connecting to the central area with another Yellow Armor and a Regeneration powerup. With this amount of health and armor lying around, ready to be picked up by attackers as well, it's imperative for defense to sweep these items up before attackers can grab them and gain an upper hand.

Bots will play the map and do their thing, although they seem to stick to the same routes in and out of the flag areas. They tend to the ignore powerups, even the easily accessible Quad Damage. This means the bots are functional, but that's about it.

The map is visually pleasing. There are no real faults to be found in the way it looks. The only complaint I have is that with the night time skybox. It might have been a good idea to go for a more blueish ambient light than the yellow the authors have used now. As it is, it's not really clear if it's daytime or nighttime. Texturing is solid. The Egyptian theme has been done quite a bit, especially with sock's texture set, so that means a map using these textures needs to do something real special to stand out visually. I'm afraid that Egypt Crossings, while looking great by itself, does not do much to really set it apart from other Egypt themed maps. The pyramid is a nice touch, albeit a bit predictable, and the use of the map models is neat.

A decent, good looking map that would do well in your CTF map library.

Tig's notes: The readme for this level states it is a beta release. If a final release is available, be sure to let me know. 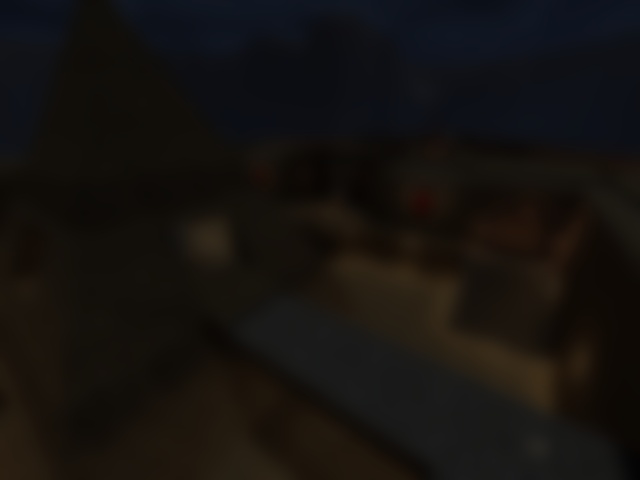