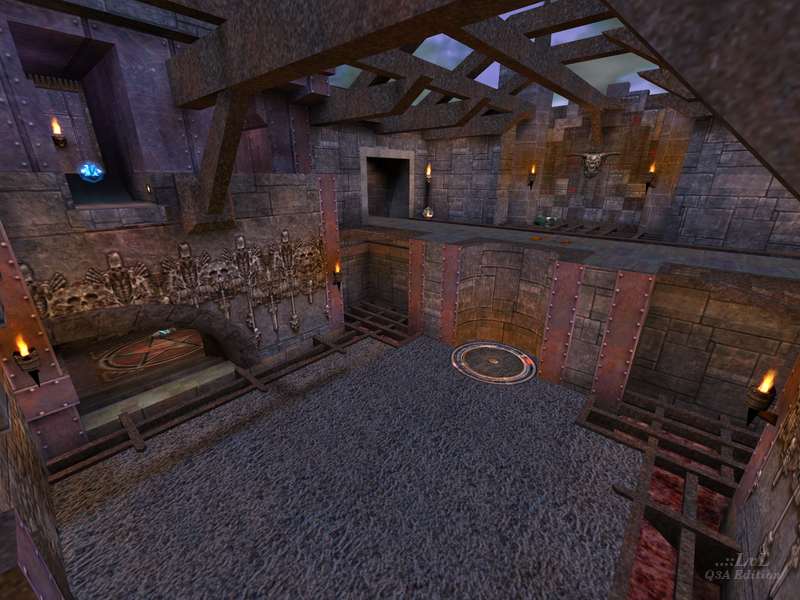 Desuraedesota is a small Gothic styled FFA / Tourney map from the mapper JonnYReds released back in 2007. It is connected well, if somewhat tight over three levels. The lower level holds the RL and the Red Armour with a jumppad to the mid level and a teleporter to a ledge (where you will find the GL) overlooking the outside area. The mid level holds the SG and PG. The upper has the LG / RG and MH / YA and leads to the small outside area, overlooked by a statues of Uriel and Visor. There are a couple of drop holes from the outer area, one of which holds the Quad (which you can RJ up to from the lower area).

The more keener mapper eye will notice the Visor statue has the nice touch of an added hand crafted sword which will largely go unnoticed during game play but kudos for something a little different. The map contains two secret panels, behind one of which you will find the Medi-Kit, the other simply provides an nice little alternate drop to a weapon and unsuspecting enemies. The later you will stumble upon very quickly and the former really isn't that difficult to find.

Your default bots are Xaero, Cadavre & Bitterman. None of these makes for a difficult challenge given the tightness of the map and the location of the rail is too easy to control given the local MH & YA, meaning Xearo is easy to handle.

Overall the map is a solid piece of work and has a pretty consistent theme to it. There are a number of Z-Fighting issues where brushes overlap (though they are small enough to go unnoticed to the untrained eye). I do like this map as it has got an old Quake style vibe to it.

I think it is one of JonnyReds better maps and although I probably won't keep it in rotation for long, I would say give it a whirl. It is worthy of a couple of games and at least it's an original.