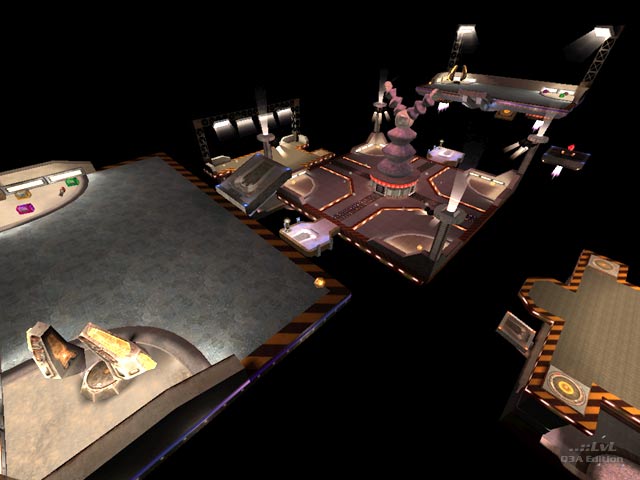 A two map pack consisting of one tech/base map and a space map.

Cross Bouncing (crossb) is a space map very much in the vein of Q3's usual spacemap style. One cool feature is the arcing electrical generator that forms the center piece of the map. Play-wise, I'm really not sure what to make of it. The layout is very simplistic and item placement doesn't really seem to have any particular logic to it. Flow is not good with movement between the platforms requiring rather more concentration than it should. The bottom of the skybox is missing a nodrop brush, so dropped weapons accumulate there. This doesn't seem to effect the bots, who generally seem to play quite well, although they rarely visit the two lower side platforms unless they spawn there. That said, there is fun to be had here for space map fans.

Unfortunately, the map isn't going to be kind to low end systems. There are a lot of curves, models and detail, and the author has not been sparing with the shiny shaders either. Given the map's open nature it comes as no surprise that the r_speeds are over 10K throughout most of the map and over 20K in large areas. Hinting, and using bent patch meshes instead of square cylinders for a lot of the curved trim could have reduced overdraw.

Steelworks 2046 A.D. (mx286) is a tech/base map with a style somewhat like a shinier version of Deva Station (q3dm11). The lighting is quite atmospheric but unfortunately this means it is generally going to be much too dark for most people, and is almost black in places. As with Cross Bouncing, there are some issues with overdraw, especially on curves, and with framerate. There's also some z-fighting which looks like a duplicate brush, and one missing texture (from mapmedia.pk3 as usual). Overall though this doesn't spoil a sound implementation of the style, with generally robust brushwork and generous use of curves.

Areaportals have been used in all the doors to keep framerates up, which is actually a bad idea in any multiplayer map - as soon as the door is open, the AP may as well not be there and the amount of triangles the engine has to deal with shoots up giving a framerate hit. It's better to ensure you have adequate vis blocking around the door so the areaportal isn't needed.

Like Cross Bouncing, Steelworks has some issues with item placement although it does seem more considered. Placing powerful items very close together such as RG/RA and LG/MH probably wasn't a good choice. Some parts of the map are very flat, but more areas have height variations and interesting jumps to keep things lively, so most will find the map is good enough to entertain for a few rounds. Bots seem to play OK but there were a couple of items that I'm not sure I ever saw them go for.

Summary - One last thing to note about this pack is that it replaces the railgun sound. Neither of the two readme files hidden in the .pk3 make any mention of this, and most people are going to be annoyed by it - especially since the replacement sound will override the normal Q3 effect regardless of whether you are playing a map from this pack.

If you can put up with that irritation, you're getting two maps for the price of one fairly small download, both of which will entertain for a while, and despite my criticisms are pretty good for a first release. 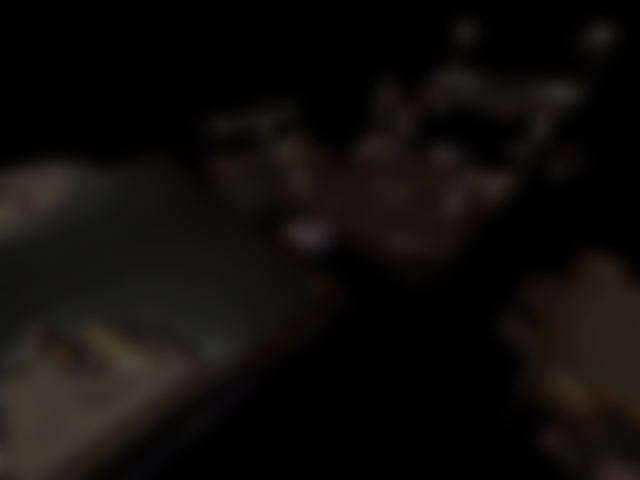