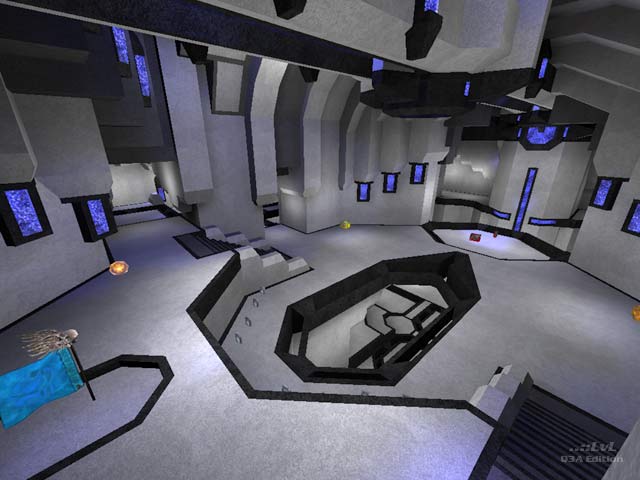 First things first. This map is Jaw dropping, tongue lolling, stunning. Eversor Omni Rei, using Nunuk's Geocomp2 texture pac provides a wowser of a map. The main theme is stark white concrete with jet black dividers moulded into severe geometric angles. Stark vaulted ceilings and curving mirrored staircases with fountains give the whole map an almost Echesr like feel. Color is provided in sparing doses by jumppads, lamps and lightbars in static red and blue to indicate team territory. Even the sky-boxes are done in harsh primary Blue/Black or Red/black to complete each flag-bases. The theme is stark harsh and beautiful.

This small CTF map has good multilevel game play for lighting fast captures and nasty fire-fights. Almost no, no-mans land to speak of save a small room on the lower level means that you will be mixing it up quickly. Movement is fast and quick with level changes just a hop away. The level is built well but alas, things begin to go rapidly wrong from here.

Weapon placement is bad. All weapons save the shotty have an ammo box bobbing right beside them, so no need to forage. Item placement is okay, but what really damages the map is bot play.

Eversor is honest and tells you up front the bots are stupid in the readme. What he means is that he did not bother to work on the bot-files. All they do is move to the lower level and stand about. they will fire on you if they see you but are easy to avoid, and don't expect any help from your bot buddies either you are on your own.

For me this turns a great map into a ho hum map. I know that Q3A is supposed to be about multi-player. I love to play against real people, but lets face it a lot of people play against bots. The bot file is important to a map, ignoring it degrades a maps game play as surely as ignoring textures or clip-brushes. I would love to see this map given a better Bot file. It would turn it into a keeper.

Download for looks, not for game play. Some will keep.

Bot support patch: Colton has created a patch that corrects bot gameplay. It is highly recommend you download the bot patch as well as the map. 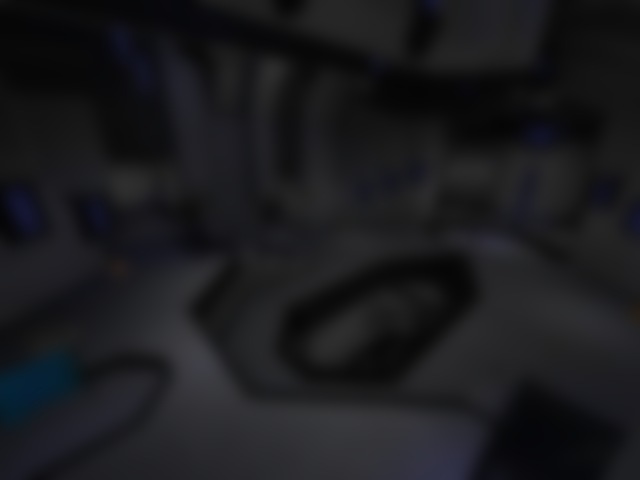