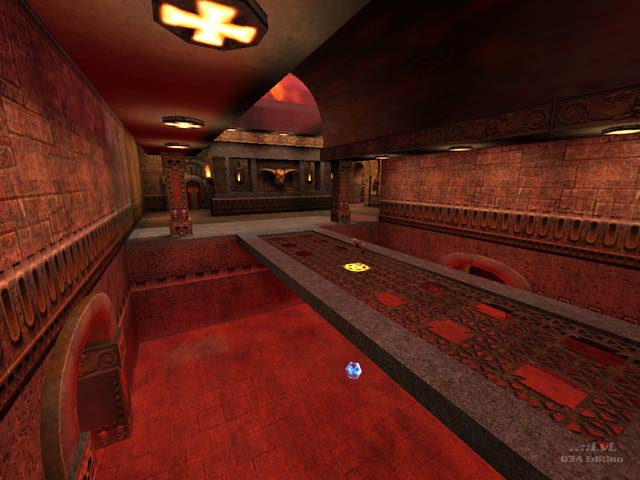 The strong gothic vibes of this map are enhanced by some select custom textures. Heavy timbers support much of the roof and the Shotgun/Megahealth room is floored with a ruddy but non-lethal fog. The spider web is also a cool touch. My only criticism of the texturing is of the greenish metal laid across all the steps; it glints from certain angles with an objectionably bright white that distracts the eye amongst an otherwise dirty and smouldering color scheme.

The layout is semi-symmetrical, with the LG, RG and PG occupying the non-symmetrical rooms at the corners of the map. These areas are moody and contain the odd piece of health, ammo or cover. However, the game play is so dominated by the RL and its courtyard there is little time or equipment to really draw combat to them. Only the Red Armour and Quad are good excuses to visit the interior rooms, both of which are found in special locations. One switch opens access to the basement RA. The other activates a grill leading to the Quad. Running on this grill also causes it to retract, the whole feature being derived from Quake 1's 'Elder God Shrine'. Even with these items, though, arrival at the courtyard always results in a rocket to the face. The range and speed of the RG and PG offer some advantage over the RL in such a large area, but any skilled rocketeer can hold their own without wasting time collecting secondary weapons. The RL position is a stage built for defending.

Play testing with bots, it was amusing how many frags I gained simply by planting my crosshair on the teleport destination, waiting a few seconds then firing. Bots play well in the areas they visit, but you'll want to launch some characters with more exotic taste in guns to send them further around the map. The switches do not interest them at all; consequently the Quad and RA are at the disposal exclusively of human players.

Play this map and you'll be treated to some atmospheric visuals and neat layout. But you would better like rockets. 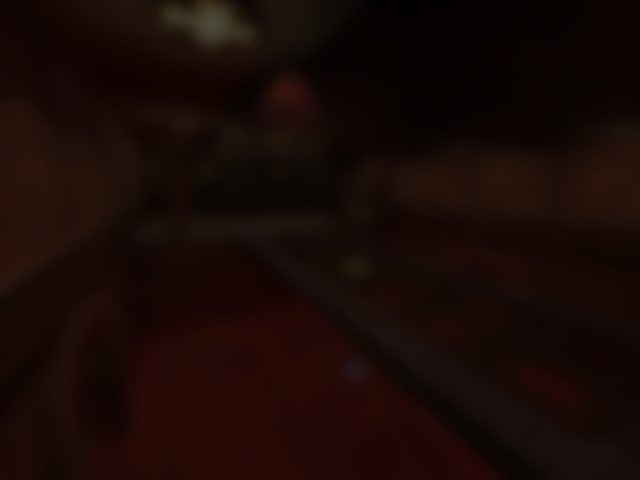