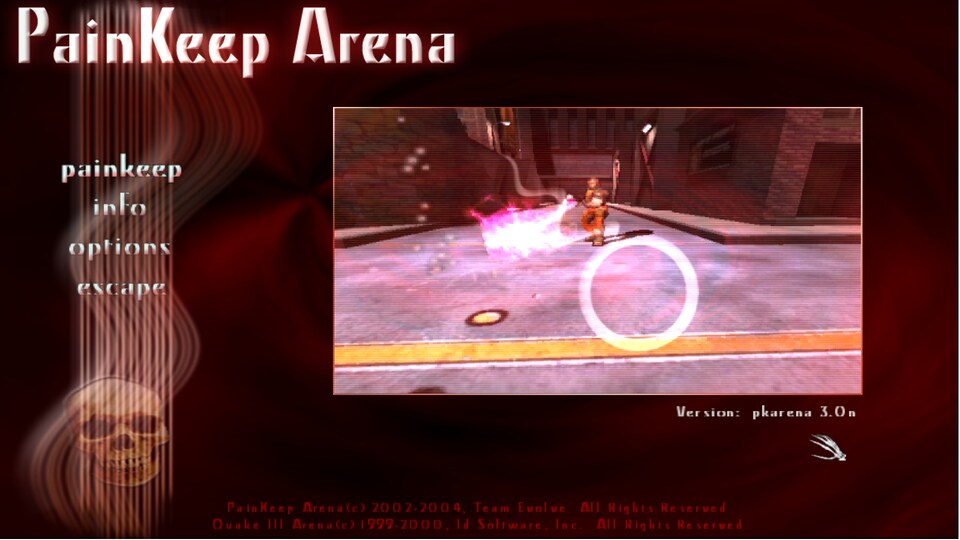 Painkeep Arena is the Quake 3 incarnation of one of the most legendary Quake mods ever to grace its presence upon hard drives the world over. Developed by Team Evolve, who also worked on the original Painkeep for Quake as well as the excellent Zaero expansion pack for single player Quake 2. Painkeep Arena could be described as an "everything but the kitchen sink" kind of mod. There's no focus on a specific style of gameplay, but what you do get is a whole smorgasbord of new weapons, items, and other fun extensions to the base Quake 3 experience. There is so much content packed into this mod that it could be considered a second unofficial expansion to Quake 3 (after Team Arena), and a single review can't really do it the justice it deserves - it really has to be seen to be believed.

Whereas many mods would be content with just a simple readme, Painkeep Arena goes all-out with a full-blown HTML/CSS manual rocking that good old late 90s/early 2000s cheesy decorative flair. It covers all the bases, including the design philosophy, the new weapons/items and even a section on scripting and binding complex actions. It's a highly suggested read for anyone wanting to get into the action for the first time, considering the sheer breadth of what Painkeep Arena has to offer.

Right away, the first thing you will probably start playing around with is the multitude of new toys and gizmos. All-time favorites from the original Painkeep, such as the Airfist and the Gravity Well make a return, as well as some new trinkets like the Radiate holdable and the Personal Bot.

The Airfist could be argued as Painkeep Arena's signature weapon, due to its sheer versatility. It fires a blast of air which can knock away not only players, but items as well, making it effective at keeping other players at bay or denying important pickups. The airblast can also be used to perform a no-damage weapon jump, and finally it has the ability to deflect incoming projectiles, allowing you to not only defend yourself but also make the opposition get a taste of their own medicine. Best of all, it needs no ammo, as it regenerates it on its own; it's a weapon you will want to grab as soon as possible and learn the ropes of.

Besides the Airfirst, Painkeep Arena delivers a new take on the Nailgun, which unlike the one you may be familiar with, the nails from this weapon stick around to burn and sizzle players for a short period of time, giving it passive area-denial capabilities similar to the Prox Launcher from the mission packs of both Quake and Quake 2 as well as Team Arena. The Lightning Gun has been upgraded into the Chain Lightning Gun, which fires bolts that jump from player to player, allowing multiple opponents to be dealt with in short order. The unused Grappling Hook weapon gets a makeover as The Dragon, which not only lets you soar across the arenas to your heart's content, but also lets you snatch away items from a distance and continue to use other weapons off-hand after the tongue has gripped onto a surface. The Railgun has been replaced with the Magnum, and the standard Shotgun can now load up explosive shells.

In addition to the more "traditional" fireable weapons, Painkeep Arena also comes with what the manual refers to as "special weapons", or what I like to call "deployables", as The Dragon has another ability which lets you take these items and drop them off using the tongue to a location distant from your own through a special keybind. The Autosentry is a portable set of automated turrets that will ruthlessly mow down anyone in its sensors, the Beartrap lets you lay traps that snag unfortunate souls who step foot in them, the Can of Pork and Beans lets you restore your health with a side of unflattering flatulence, and the Gravity Well generates a sort of black hole that will suck in anyone who gets too close. Be aware that the Autosentry, Beartrap, and Gravity Well can be just as harmful to you as they are to your enemies, so be mindful of where you place them!

Finally there are some new holdable items. The first one is the Personal Sentry, which zaps other players within your sight, functioning similarly to the Defender Sphere from the Quake 2 Ground Zero mission pack. The Radiate item, well, irradiates any item that you pick up or run across - once they respawn, the item will give off green particles indicating their toxicity, and players who try to pick them up will take continuous damage from the radiation as a status effect. The most interesting item of them all, in my opinion, is the Personal Bot, which is separated into three components; the head, torso, and legs. Once all three are assembled, you can activate the bot, which will run arond the map fragging players in your stead, giving you any frags they earn to your score. The bot is still just as vulnerable as a normal player though, and I do think it could have been made a bit more powerful or durable to compensate for the effort needed to obtain it. It's also worth noting that the player can carry more than one holdable at a time, unlike the standard game, and the player can cycle through them by binding a special key, with the ones appearing at the top being the first to activate.

Painkeep Arena also spices up the interface with two new HUDS; a standard number-based HUD and a status bar HUD using a gauge. I still prefer using the numerical HUD as I like to know exactly what my health/armor/ammo values are rather than guesstimating through a meter, but some players might enjoy having the choice nonetheless.

And of course, where would Painkeep Arena be without an assortment of marvelous new maps to experiment with all the fresh gadgets at your disposal? The selection of themes is diverse and rich in atmosphere, from creepy, foreboding gothic arenas packed with nightmarish sounds and scenery, to tech-style maps with more OSHA violations than you can shake a stick at. It's hard to pick an absolute favorite, but personal highlights of mine would include Spear Point, Suicide Staccato, Techwalk, Laser Turkey Mouth (they had a bit of fun with that one), and The End. You can tell that each and every map is crafted with love and care, with excellent attention to detail and even some neat secrets here and there to reward the more intrepid individuals.

While Painkeep still lets you call votes for maps the old-fashioned way, it also has a much more elaborate voting system in the form of The Hub map. You spawn in front of a dark, brooding castle amongst a lake of molten lava. As you traverse the precarious rocky walkway to the entrance, you are suddenly drawn into the pitch-black tunnel facing you, where you are then thrust into the voting hub corridors. From here, go into any one of the four passages and pick your map of choice by diving into the mouths of any one of the ghastly flesh visages. All of Painkeep's pre-packaged maps can be selected, and in addition, in the "0-4" maps passage there is a "New Worlds" portal at the very back which lets you pick additional maps not included in the base game installation. Once a map is selected, you will be teleported once more into an arena where you can fight freely against other players to warmup before voting concludes.

This review really just scratches the surface of what Painkeep Arena is truly capable of, and only a download and a full dive into its murky depths will help you understand why Painkeep has gone down in history as one of the most critically acclaimed Quake mods of all time. 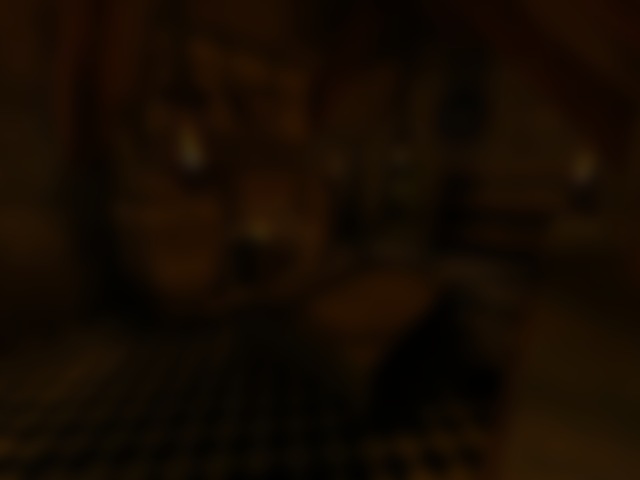