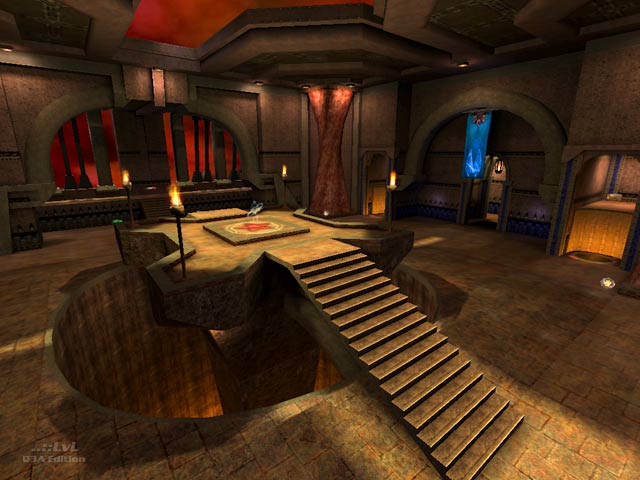 thanks for this map

Agree (0) or Disagree (0)
]Pm[keshian unregistered
#10   29 Aug 2000
gdit I meant the rl and the rg should be switched :) (thanks rec) hehe
Agree (0) or Disagree (0)
]Pm[keshian unregistered
#9   29 Aug 2000
ok some more stuff...I REALLY don't like how you are forced to split up your defenders, 1 in the upper ramp arena overlooking the mega and 1 in base. However, your defenders will get owned EVERY TIME because the only rls are in the middle of the map which is completely inaccessible to inner base defenders. Furthermore, there nees to be more armor. There is a ya and some shards to let your base defenders have a chance but they will have either a rg, ss, pg or lg which is NO match to a 2 man attack with rls esp in tight quaters. I dont' know where the respawn pads are so its hard to say how valid this next thing is but with so many varying exits and backtracks its going to be VERY hard to locate, track down and kill enemy fc's leaving your base or during a standoff. Mostly likely they'll be near the ya/mega since that's the only thing that is going to keep them alive for any given period esp since his defenders aren't going to have a rl or if they do they are going to be hard up on rockets. IMO the rl and the rl should be switched and that will solve alot of problems...as far as the bfg I dunno...maybe a ra and a 50 health pack. That's about it for now..things to think about...
Agree (0) or Disagree (0)
]Pm[keshian unregistered
#8   29 Aug 2000
ack..ok first thing THE BFG HAS TO GO!!!!!!! Its in a secluded spot but its retarded and should never belong in q3ctf. Also take out the tech that doesn't let you take damage from splash in the middle. Everything else is ok so far and I like the fact that you can't rj off of the pad the flag is on and there are 4 entrances into the flag room..well 3 since the top 2 come from the same corridor. These are my first impression after running around for < 3 minutes.
Agree (0) or Disagree (0)
Hal9000 unregistered
#7   20 Aug 2000
Hey guys, thanks for the comments. I am currently working on a "fixed up" version of this map, as I found a TON of stuff that bugs me to no end.

The r_speeds in the middle are no higher than some of id's original maps, but I can imagine that on lower end systems it could be a little framey.

Agree (0) or Disagree (0)
Helta unregistered
#6   19 Aug 2000
Yeah, I'm sorry, I made that comment at a god awful hour of the morning, sorry :)
Agree (0) or Disagree (0)
GONNAKILLYA! unregistered
#5   19 Aug 2000
My, my, my! What a beautiful map! This one is lotsafun! I agree with SiCdeth, however, when he says the sprial staircase is waay too long. It is. Oh well, one small blemish on a fantastic map that should keep the defensive player guessing.

I just need more players! 3-on-3 CTF is the bare minimum for this map. Anyone know an IP I can connect to play this map with more than 5 other people? This CTF should be in the rotation of any CTF server!

I'm drooling all over myself.

While it is true that it does get a little framey in some areas, Generally Hal has done a GREAT job of keeping r_speeds down....

I'm gonna have to disagree with SiCdeth and say that the main atrium is perfect..... I have always loved maps where the enemy flag carrier has always been visable, and it's a chase to hunt him down.. and having the main area helps this....

its a little tight in some corridors and it is a little hard to move around with enough freedom (in my opinion) and the central atrium is too open and the frames go down, even without any other players visible.

on the good side i like the brushwork and all the little details that Hal used. like the cross on the wall with the torch.

there are, however, some texture misallignments but its hardly noticeable, the spiral staircase is waay too long.

pretty good map i give it a 6 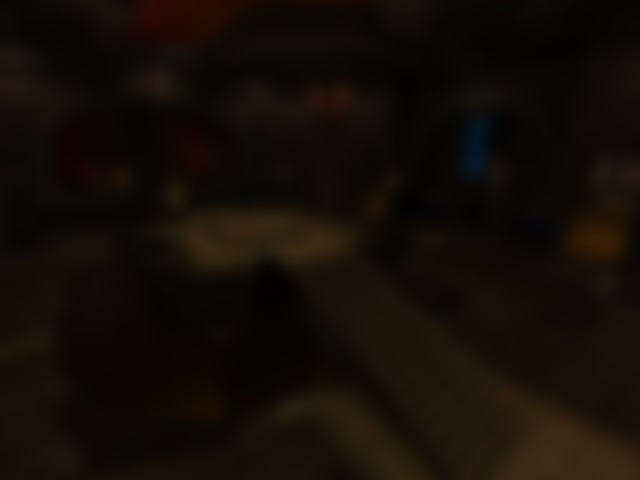