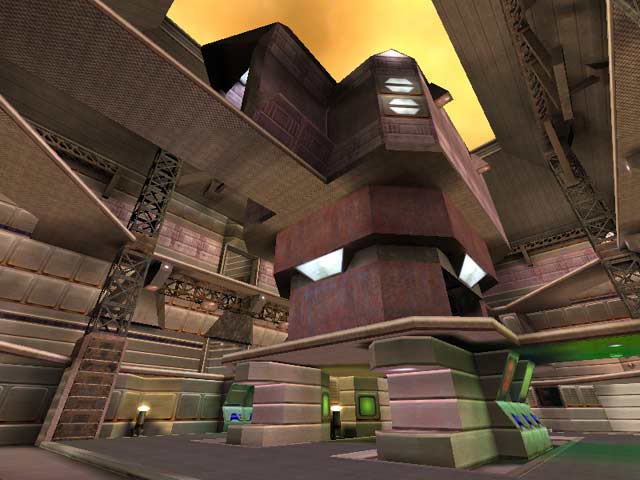 PaN61 Rep. 337
#29   14 Nov 2009
This map is one of my favourite maps. Gameplay is good, bots seem to play excellent on every floor. I make this map challenging and so I can perfect my rail skills by playing this map with 11 bots on Nightmare!

with stairs would take away the game flow.

the jump pads speed up the action as it is easier access to the upper levels.

also it creats the railing skills you need when using the Jump pads.

besides its a Rail Arena not

cant use the railgun

in some ways arena's are harder to create than maps such as tourney or DM,

because you are trying to create a map thats got everything you need in just the one area.

to design an arena that works is quite difficult it works or it dosnt theres no middle ground.

in DM maps and Tourney maps players stick to areas they like to play in,

i have fave areas in all the DM maps that came with q3.

you also have to design the arena so it doesnt look like your just running around in a box, which you dont have this problem with DM or Tourney maps.

it wouldnt be to much trouble to add rooms and stuff to sector5a arena and turn it into a tourney map.

has got me hooked.

it seems that the MG ammo is taken out 100% of the time in Team mode, in free for all mode

it is given and also in tourney,

i feel that in FFA mode the MG

and i think works well in that mode because depending on the number of bots you place in the arena you are more likely to get railed before you use the MG.(mainly because of the armour

if you would like to see this map converted to a Tourney map with all weps available let me no and i will do just that.

trying to find out Why the MG ammo was being given when it shouldnt be.

it seemed to work most of the time but evry now and again didnt and allowed me to use the MG.

the ent seems to work when it feels like it, if you feel it spoils the arena enough to re-compile it let me no and i will try to sort out this problem

but my gut feeling tells me that

it must be the give ent itself just being temprimental.

yes m8 thats right it is there in the map and targeted to all spawn points.

in my first rail arena BDRA3 sometimes the entitie worked and sometimes it didnt.

the ent is set to all modes of play so i cant think why the MG ammo is still counted.

on the matter of the MG ammo

there is a give ent on the map

connected to an MG ammo ent with a value of -100 so i cant understand why people are getting ammo for the MG :(

This kinda of map is great for those accuracy shots that you absolutely must learn in these games to do well :)

again the connectivity is bad in the lower level with 4 bots.

if you wouldve gotten rid of those things that flash on both sides everything wouldve been fine.

Agree (0) or Disagree (0)
Meatboy Dogfood unregistered
#7   20 Jun 2000
Nifty level that allows one forces one to move or die. Great for honing moving and mid jump railing.

I also like the fact that there is a good chance your target will not go down in one hit. Training to stay on target and double tap a rail gun is a good thing.

The map flows great and it has a high itch factor with multiple players. {Itch factor meaning that you just know that something is always lining up on you out of sight.;}

That was also the reason why I liked the MG ammo. It helped finishing off those bots( which dominate anything rail-related against me). Would have even liked to see some ammo boxes. But I do agree with Octovus, it's a rail arena and so the mg ammo should be out.

What I didn't like (at least against bots) is that you spawn with 100 armor, so most times you (and the bots) survive three hits. The bots were stealing all the frags from me. When I had hit them twice, some other bot would finish them off. I'd have much more fun if you'd spawn with 50 armor. But that's probably just my lacking rail skills.

Would do well as a normal tourney level with a normal weapon set and different placement of the mh and ra.

A great rail arena, it has the flow and layout that it could even be transported to a regular DM (not that I think that should be done).

The custom bounce pads looked really cool, and they were the only way to get up. I originally thought that might be a problem (easy mid air frags) but it wasn't really as there are enough powerups, such as +5 armors and healths, the RA, the Megahealth, that one shot does not often equal one kill here.

The RA was placed nicely out of the way, as it is the dominant thing in this map, while the Megahealth is placed in the middle of the fray; an interesting idea, and one that worked well.

It would be too large for 2 people I think, or more that it just wouldn't work, as the RA and Megahealth could easily be controlled. This won't happen in an FFA as someone will almost always have grabbed the Mega before you can jump down from the RA platform and do so yourself.

Great atmosphere, cool bouncepads, and fun all around, but one comment: On other rail arenas, the mappers take out the MG ammo from the level. There is a reason for this, certain bots such as Bones use the MG before the RG, it kinda messes things up. However, the spawning ammo was reduced (to 50) so that's just nitpicking.

Great map, better than the other two recent rail arena's here, and that's saying something! 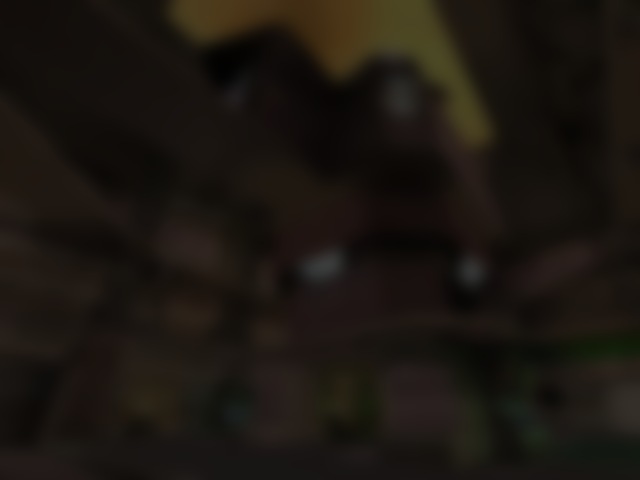