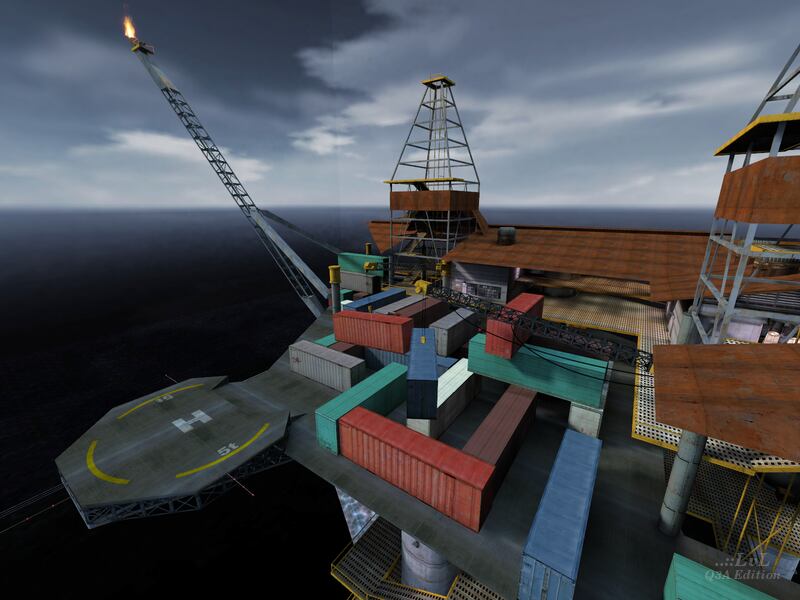 **Preview only**
Be sure to submit your comment
Submit
Preview
Cancel
Submitting comment...
old skool fragman unregistered
#25   30 Jan 2021
It's been a while but we used to almost exclusively run this for LAN in the school computer labs when the teachers weren't there. No bots, just a bunch of peeps trying for the most frags, trickshots off the towers or even just trying to jump for that secret spot you can only get to from the helo (no hints, go find xoxo)
Agree (1) or Disagree (0)

raspatan Rep. 4259
#24   28 Nov 2020
Very well achieved atmosphere. The moving helicopter, containers and platform (or sea, rather) are greatly achieved effects. But it plays badly. It's annoying to be falling constantly (or bots, at least), and even more so it is getting back up. This end up not being fun.
Agree (2) or Disagree (0)
Claudio moena unregistered
#23   27 Sep 2013
there is a problem, I noticed that the bots always go to the bottom of the sea. someone could fix it?
Agree (0) or Disagree (0)

JADscratch Rep. 437
#22   02 Apr 2013
I've had this map on my hard drive for quite some time. I must say that this map is quite astonishing: both for its details all over the storage crates, metal pipes, etc., and the way the map makes you feel like you're actually out in the middle of an infinite ocean. For those who like to fight, I will warn you that the gameplay can be a little off, since the bots just LOVE to chill nearby the bathrooms. For all you practicing Defraggers, this can be one heck of an arena to practice in. For those who just like looking, you can expect to have a pretty interesting adventure exploring the many floors and rooms of this map. Overall, an excellent map for all of us to try at least once. A wonderful piece of work, gloogun.
Edited 6.83 days after the original posting.
Agree (1) or Disagree (0)

Kyall Rep. 317
#21   10 Mar 2012
A very good map. This is the only map I know that has a moving helicopter in it, which you can board. I like the fact that if you fall off the edge, you don't go in the wrong place, but you fall into the ocean where you can swim back up onto the platform. There are a lot of good hiding places in this map, which make it fun to creep up on unsuspecting players and shoot them. Overall, it is very realistic, textures are awesome and it is a good free-for-all, or team deathmatch map, with bots, or humans. 10/10.
Agree (0) or Disagree (0)

KommissarReb (SW12) Rep. 2210
#18   13 Jun 2011
I liked this map because it was a space map that floats in an ocean with ACTUAL WATER at the bottom. My only complaint is how the bot's obsession with jumping into the water and drowning.
Agree (0) or Disagree (0)
Anonymous unregistered
#17   15 Apr 2011
My name is Rsol. I just want gloo to read this one day:) we had a good hard slog at that mod. was a shame we never got to see it complete. hope you are going where you wanted. i was hoping you would go places. let me know how you got on.
I have play tested this map probably more than any of the others:) it was our flagship map for GTP. and yes it should be converted for urban terror. if not crysis 2!!!! i think this map still has a day in the mainstream to come to it. a work of art and tenacity....
Agree (1) or Disagree (0)

PaN61 Rep. 337
#16   31 Jan 2011
SW12, just like gloogun said in comment #10, board the helicopter from the H landing zone platform and ride it past the first tower, then as you become in line with the second tower you may see a tiny dot to aim for which is away from the tower (The tower is on the left side and the tiny dot is on the right side of the helicopter), or in other words, looking towards the skybox/Ocean.

If you do time your jump right, you will teleport to the BFG. Before you board the helicopter, you may find it helpful to pinpoint the exact location of the tiny dot from the ocean or the second tower. One more hint is that the tiny dot doesn't blend with the skybox so it's more easier to find.

I found the tiny dot that's supposed to teleport to the BFG, but whenever I jump on to it, I miss (gotta keep trying).

When it really is that that the Helicopter flies around and you can enter it and have a fun ride! I loved the texture inside and the little fan on the desk and the kitchen! The part I loved the most, was that this platform isn't floating in space, its in REAL WATER!!!!! SUPER AWESOME!! water was so fun! I tried getting on top of the raft but when I tried to I couldn't so I was STILL stranded in the water. But better water than a void by a million! I think thats what I had the most fun with. Again, AWESOME JOB, gloogun! Please do us a favor and MAKE MORE MAPS!!!

Board the heil from the platform and ride it past the 1st tower. As it passes by the 2nd tower, jump out of the heli away from the tower. You may see a tiny dot to aim for. If you time it just right you will teleport to the top of the flame tower. Grab the BFG and slide down the support.

Hooyaah Rep. 559
#8   20 Feb 2010
Well, PaN61, I'm unable to come up with any explanation why there appears to be no way (cheats excepted) to obtain the BFG. It just twirls around way up there taunting one, doesn't it. It reminds me of the BFG trap in AEon's now famous AEon's Arena; there it is (the BFG) but you just can't have it. Well, in AEon's Arena, you can have it, but it's ill-advised. Aside from the irritant of the "look at me...can't get me BFG", the map is very realistic and can be fun.
Agree (0) or Disagree (0)

Overall,l it's a 9/10 from me.
Keep making more maps like this, gloogun.

(How do you get the BFG?, I tried riding on the helicopter and it didn't get to the BFG, I tried climbing up to the BFG, that also didn't work, it looks impossible to get the BFG)

AEon Rep. 700
#5   27 Aug 2009
Very much reminds me of an original SP map for Sin. The idea and implementation are very inspiring... but alas like almost all real-world inspired maps they simply cannot really play well, and don't, IMO.

Agree (0) or Disagree (0)
TVisitor unregistered
#4   20 Jan 2006
I tried this level with about 7 other people and it was a real trip. Very different than the standard dark, gothic stone style Quake map. The helicopter ride was so much fun, and really was great because most of the other players didn't realize you could even get into the copter - great advantage for me. The only thing that left me going "awwww...." was that the little life raft out in the water could not be gotten onto. Everytime I tried, I just went through it. Would have been fun to sit on it and rail others. One other thing that I wondered about (if it was intentional) was that when I was hanging out at the top of one of the elevators, I could see "shadows" of the other players when they were under the box-cars and underneath the platforms. Made it very easy to track them when they'd come out and pick off with the rail. I also found myself (and others) spawning a large portion of the time in the bathroom, rather than other places. However, in all, it was one of the most fun maps I've played in the long time, mostly becuase it didn't "belong" in Quake. I'd actually give it somewhere between a 9 and a 10 for original and very fun gameplay.

PS: Hey, is it possible that the boxes that are hanging from the crane - the ones that kind of tilt and revolve - could tilt more when someone is standing on them? Not sure if the physics model in Quake would let you do that or not.

re: the bots; you're right, this map isn't made for bot play. I've thought long and hard about it, but there are several structural issues that prohibit proper bot nav. Mainly, the water brush is one giant func_bob, with its midpoint several units below the stair platform. Unfortunately bots can't 'see' a way out of the water once they fall in. I considered a hurt trigger that would slowly kill off any floundering bots, but decided it would take away from the player's experience. Also, there are several heavily weighted botroams placed at strategic spots around the map to get them to spread out into the upper areas. Watch for bots to ride the elevator, get to the top and immediately jump off into the abyss (heh).

Thanks for the look.

J2KoOl63 Rep. 70
#1   20 Dec 2005
Well, isn't this a sweet looking level. The detail is magnificently done, I saw it everywhere. The helicopter ride was a real treat, because I loved going around, with a railgun in hand, waiting for a bot to appear. The inside areas are cool too. The agriculture just blew me away in this level. I also liked taking the lift up all the way and watching everything else fall below me. Marvelous.

However, bots played horribly. I never found them high up, always down below either in the water or the railgun area. I can tell that this was just meant to be eye candy really, because I can't see how bots play good here. But, LAN play may be great, because of how it's set up. It shouldn't be really a DM for bots. 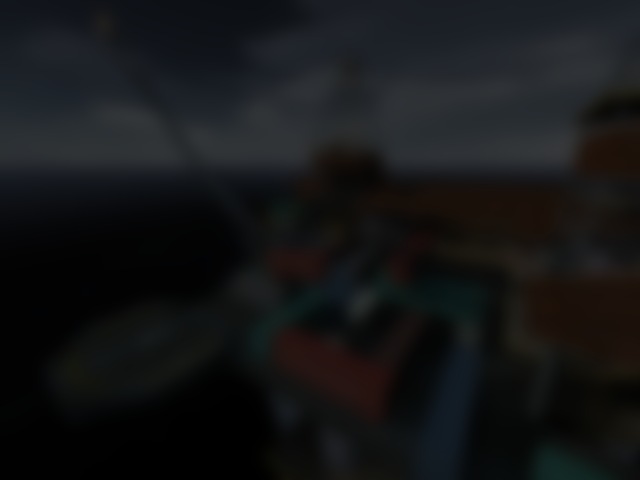