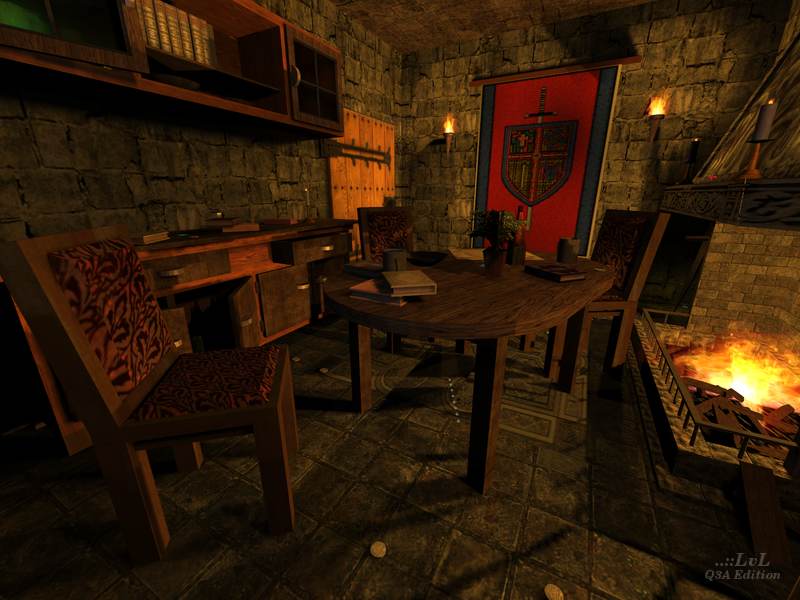 HelterSkeleton Rep. 5551
#23   29 Jun 2020
This map is amazing as an example of the Larger Than Life genre, especially considering its age with the items for this kind of layout well-placed. Plenty of weapons on the ground and power-ups and powerful weapons well placed to be hard to reach. Green health pick ups are also grapplehook friendly. I would really love to give this a 5 but my only criticism is that it could be scaled down a bit and I would have loved to have seen the fireplace better utilised (e.g. fire deals damage and perhaps also provides another access point to a power-up such as the invisibility). but a great job.
Agree (1) or Disagree (0)

bozina69 Rep. 74
#22   12 Feb 2019
Just discovered this map seeing it in a recent downloads home page on lvl. (It's working!) I can't say enough about how cool this map is as others have stated. Railgun heaven and so many spots to shoot from. Bots can be very ferocious and appear to traverse the entire map, but I never see them try for railgun or BFG. Traps and teleporters are neatly placed. Play it using Alternative Fire mod. The grapnel, homing rockets, sticky motion sensing grenades, et al, lends to a new dimension in the Qiake 3 arean games. We play this mod most often.
Agree (2) or Disagree (0)
Anonymous unregistered
#21   25 Jun 2016
Wow !

Are there any Giantess Player for Quake 3?

I remember a few years back looking at the screenshot with the thought that the mug with water in it was slime that would hurt you, but its actually water that heals you.

Great for mods like Rune, Hunt, Superheroes, and any mod that includes grapple hooks

FragTastic Rep. 2251
#17   11 Jul 2012
''Thee Fie Foe Thumb, I Smell An English Man''. Lol takes me back to the childhood days. The layout/design itself is pretty cool and it is very hard to make these kind of maps so you need a lot of skill to make Larger Than Life maps, I've tried it myself and it didn't come out to good. Yeah! well the map gets a 7/10.
Agree (1) or Disagree (0)
Obcessed unregistered
#16   19 Sep 2007
Adding 'coffee' (lava) to the giant's mug would solve that problem easily.
Agree (0) or Disagree (0)
Null Geodesic unregistered
#15   13 Jan 2003
Don't know much about missing textures, but I know what I like, and I like this map. Fiesling obviously had a good time mapping it, and I had a great time playing it.

Frankly, many maps look the same to me. It's very rare that a map stands out as being memorable, but this one definitely does. I've gone back to it time and time again.

As for FPS, it plays perfectly under an Athlon 1.0GHz with a 1st generation ATI radeon running Linux. I can't detect any slowdown or non-smooth video at all.

it's spectacular light it's awsome. what kind of light you using at torch =) i really curioused.

i'v been your secret place, BFG, regenetion mug, even acid greeny fluids. =) it's very good even filght&quard =) i'll enjoy this map thank you.

Agree (1) or Disagree (0)
Octovus unregistered
#13   25 Feb 2002
Since Mr. Smart stuff over here feels the need to insult me with one line replies in every thread I post in...I did not score it. I didn't go in the little window at the top and vote, which is what that window is for, because I felt my opinion was biased by my crappy system for this particular map. If your only intention on this forum is to make "inflammatory" (or at any rate completely retarded) remarks that have nothing to do with the reviews, please leave, before we shove you ass first out the door.

which means you just scored it. duh.

Ok... sorry. Thats just the impression I get. Now that you've taken the time for explanation, I understand you correctly. My sincere appolgies to you Pure Imaginary.

I was not that hard on the map.

Remember, dozens of "giant" maps have been released, and there are going to people on the fence wondering if this map is going to offer anything "new." Besides the "look" of the map, everything else has been done before, and the map just plays akwardly slow with machinegun spam galore like most other levels of this genre.

Simply put, people who generally don't care for this type of map won't find anything that makes this level stand out. You are a house map fan, and not surprisingly, you like this particular map.

Don't make anything more out of my review than you read; I'm trying to drop hints to players who normally do not plan on getting these maps. :)

I think it's a WONDERFUL map. I haven't had Q3 but just a few months. I downloaded this last years from your site and played it in Star Trek Voyager Elite Force Holomatch... with only a few missing textures :-) But now I have Q3 and can see it in all it's true glory.

FUN!!! Thanks for creating it!

or play it with a custom config.

the flag in the screenshot looks crazy with my card. i was just thinking.. hmm wouldnt making the brush no draw.. making the visible sides, that cloning the same brush making it the calk texture and size it up with the same brush. wouldnt doing this rid the zebra effect??

Agree (0) or Disagree (0)
Pure Imaginary unregistered
#3   23 Feb 2002
I know about a bunch of other tricks, but there is a cup in the small table that didn't didn't have a way out (aside from an RJ). I am speaking of the cup that is next to the rightmost chair in the screenshot.
Agree (0) or Disagree (0)
Fiesling unregistered
#2   23 Feb 2002
It was my first map i did with q3-radiant last year.

I know there are a lot of issues especialy the bad fps.

I was a bit dissapointed from the review. The author semms not have played the map very long.

There is a regeneration-station in the cup of the table, and if you jump into the green slimy cup in the shelfs you get right teleported into a secret room.

The map runs on serveral public servers, so if you like it and have a good comp, just check the serverlist on my homepage where you can find my maps.

Agree (1) or Disagree (0)
Octovus unregistered
#1   23 Feb 2002
This one is pretty cool - something a bit new in the house genre, done in the style of middle ages/castle-keep theme, though some things are out of place for that. I guess I'm wrong, but I really remember there being something in his cup...oh well. Anyways the map was unplayable on my system, so don't dl if you're less than top notch (at least if you intend to do more than look around). I won't score it but I imagine it'd get a 7. 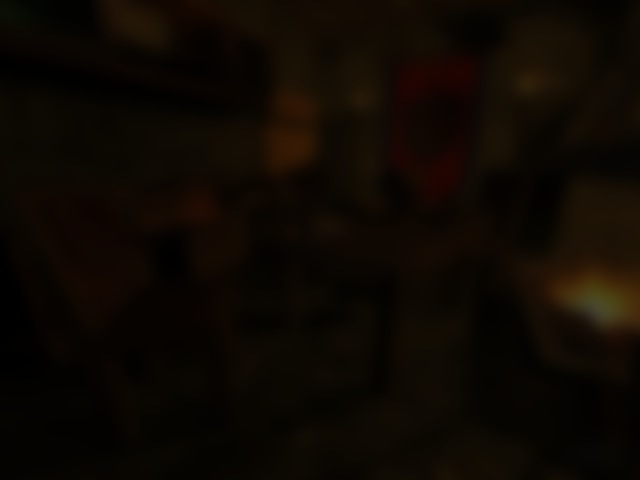