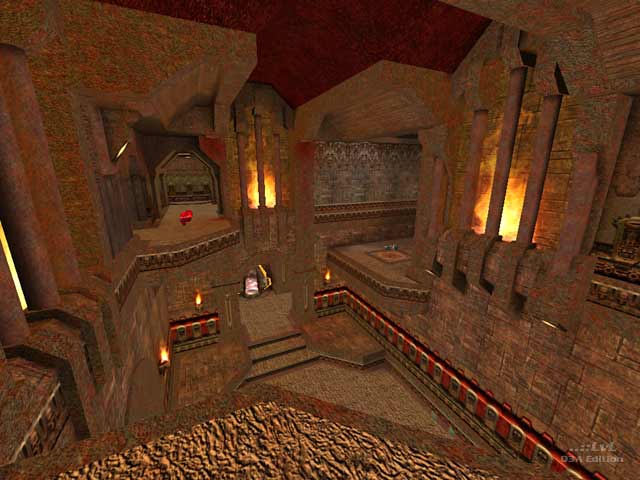 HelterSkeleton Rep. 5553
#15   16 Aug 2008
nice map that just seems a little too big in places (pg, mh) but what appeals to me the most is that there aren't really any safe areas you can use to take control over the entire map. this is largely due to the way the author breaks or blocks the clear and obvious runs of items through their placement, the placement of teleporters/destinations and the overall layout of the map. in this respect the resemblance to blood run is purely superficial as it is in this respect they differ the most. With blood run it's all about setting up control of the t-junction and therefore also the spawn points and the entire map or catching the player in control of the T-junction off-guard. Here gameplay is a little more egalitarian with no player being given any distinct advantage and no area of the map being more weighted than the others.
Edited: 12 Aug 2010 AEST
Agree (1) or Disagree (0)
darqrad unregistered
#14   13 Feb 2002
ups O_O
Agree (0) or Disagree (0)
darqrad unregistered
#13   13 Feb 2002
I think its a good map (see the readme and you will understand why ^^')
Agree (0) or Disagree (0)
Pure Imaginary unregistered
#12   12 Feb 2002
"I've had some fun playing this one, although is not a map that's gonna stay on most ppl hdds..."

I was suggesting exactly that. :)

I didn't vote... because I never do. I didn't know it was an obligation.:/

Agree (0) or Disagree (0)
nanoSpawn unregistered
#10   12 Feb 2002
As i said, i dont agree with Rebel on this subject, and maybe i should not have posted it... but that was his opinion (hope he has changed his mind)

Pure Imaginary, im sorry if i've explained myself so bad, wasnt intending to insult you. I was just commenting that since ppl can now submit reviews, reviews tends to be individual opinions, and not necessarily LvL one, and, anyway, everybody is right having their opinion.

I said i disagree with your review, well, i said 'not completely', the review has some nice points there. And i appreciate any efforts like this one. I still disagree partially, but that's another story, and not related to you =), let's smile, man! I've had some fun playing this one, although is not a map that's gonna stay on most ppl hdds...

In conclussion, Rebel maybe has been a bit mean with the reviewer (i have my fault there...), i should have explained myself more carefully, and map is ok, but not great, especially cos of being the typical gothic map.

Sorry, and as i said before, cheers to the lvl crew

Agree (0) or Disagree (0)
Octovus unregistered
#9   12 Feb 2002
Anyone isn't true either :-) (And if it was, PI isn't "anyone", I am much more of an anyone but no one has hated my reviews too much yet :-p). It's not like there's a form we fill out and hit "send" and whammo our review is on Lvl...tig is pretty careful about it. That said I tend to be on the "is it fun" side of reviews, not on the "will I be able to play it in a league I'd never make in a million years anyways"; that's the only reason I find the IP nitpicks (and I'm not saying the RA MH is a nitpick) a bit silly. Comes down to different styles, I guess. But the sort of comments RA made are not a way to get popular on these boards :-

I can't help but to be slightly offended here. I have played more than my fair share of maps, and to be honest, I am going to be a relatively critical reviewer. I hope you and Rebel Assault can keep that in mind, because while I am not a perfect reviewer, I am moderately competitive player who has had a long interest in custom levels; I feel that I am qualified enough to give you my opinion.

I can give you some additional comments, like that the Red Armor is generally too easy to pick up safely (compared to ztn3dm1, where the Red Armor is not even as important, which is problematic considering the RA + MH proximity and presense of only one YA).

I am going to do my best to let players know whether or not they should be downloading the map. In order for a map to be suited for competitive play, it needs to be interesting to play for the duration of a major tournament or for the life of a ladder or league that uses it. There are players out there that do competitive in such events and would prefer to not sort through half of all them maps here in order to find the few that really hold up, only to miss another two gems because the authors that reviewed those maps had no clue about how major competitors play.

"And I don't think PI did the screenshot."

"IP is fine, the reviewer is silly to mention RA and MH problems when he says it's for non-competitve players anyways (which I have to say I agree with unless you want to revise IP, but Pure kind of made two negatives out of one)."

I use the RA/MH proximity (and other problems, not necessarily listed) to ultimately justify that the map won't work for competitive players. Even though I specify a map is worthwhile for strictly non-competitive players, I am going to still list some of the problems so that the next map will be more playable rather than leave the mapper in obscurity of what he did wrong.

Ultimately, it isn't my job to be popular; I simply want to be as accurate as I can be.

Agree (1) or Disagree (0)
Octovus unregistered
#7   11 Feb 2002
Hum...RA, really (I don't mean red armor I mean the author) those comments are silly. I guess you probably didn't really mean them and nanospawn oughtn't have posted them but whatever...the review isnotbad. It made it into my downloading :-) (I download 3 maps with most Lvl updates).

The shot is 99% not Pure Imaginary's fault; if it is though, shame on him, that's just not fair considering the number of llammas who can't tell that's another graphics mode :-p It does really resemble Blood Run, if you're taking that as an insult well(?). The same textures is true enough, but that could be said about most maps - it's called continuity. I think the reviewer makes too much of that as a negative. The teleports are a bit excessive for a map of this size (though I wouldn't quite call it small; I played a 5 ffa with ease) but this is made more true by the smaller number of destinations. IP is fine, the reviewer is silly to mention RA and MH problems when he says it's for non-competitve players anyways (which I have to say I agree with unless you want to revise IP, but Pure kind of made two negatives out of one).

I do say it's definitely worth a peek/play, but can't guarantee if you'll keep it or not. 7 from me.

Rebel: If you're talking to jalisko or PI about playing the map, I'm sure they have played it enough to know. And PI's review doesn't ruin the map, you just feel that way because you made the map. His review is pretty favorable I think. And I don't think PI did the screenshot. I'm pretty sure Tig or Mandog does that, so don't blame him.

As for my opinion about the map: I think its a very good map, except for the fact that its been done before. The similarities w/ Blood Run were all to familiar. Not saying thats a bad thing, just saying that I like a little creativity sometimes. The detailing/texturing was top notch though, even though its the same old gothic. Map was a fun one to play, but I agree w/ PI in that its more of the non-competetive player type map.

I forgot to tell Rebel that anyone can now post reviews in lvl, so maybe that negative post from him has a couple bad points, being all my fault...

That's all, this one gets a 8 from me. Aesthetics are ok, gameplay is pretty good, but needs some custom textures, looks to classic.

Agree (0) or Disagree (0)
nanoSpawn unregistered
#4   11 Feb 2002
Well, if some1 notices that my mask and rebel's one is the same, is cause i've posted rebel's opinion instead of him... i find rebel's attitude about this a bit harsh, myself...

Well, anyway, i still disagree with the review, not completely, is certainly true that there's a room way too big and excessive, and some areas look bland, and, worst of all, is a typical gothic map (duh). But it features an enjoyable tourney with some good things, as an example, it keeps making you move all around the map, and it's pretty hard to keep control over the RA. About replacing 25h units for 50h ones, that sounds a bit ffa, imho. But whatever, i forgot to tell rebel

Agree (1) or Disagree (0)
Rebel_Assault unregistered
#3   11 Feb 2002
Perhaps the map is not a great one, but you should play the map before saying that there are too much teleporters and you should understand better the gameflow. Your review ruins the map and your lack of profesionalism makes you post a shot with vertex-lighting. I dont know how do they allow you to post reviews here...
Agree (0) or Disagree (0)
elendeNATTER! unregistered
#2   11 Feb 2002
so why didn't you vote then ?...
if u post comments like this one.. your opinion is "neutral" ;0) ?
Agree (0) or Disagree (0)
jalisko unregistered
#1   11 Feb 2002
Although, in general, I agree with the review, I enjoyed this map a lot more than what the review may induce to think.

MH and RA are too close, but the control paths they produce are quite well distributed and promote movement, it also makes the map play fast.

I specially agree with so many teleporters being unnecesary, but, once you learn them, aren't a big problem, tho.

I helped playtesting this one, so my opinnion isn't neutral, but I'd like you to give it a try. I honestly think it is a pretty good gameplay map. 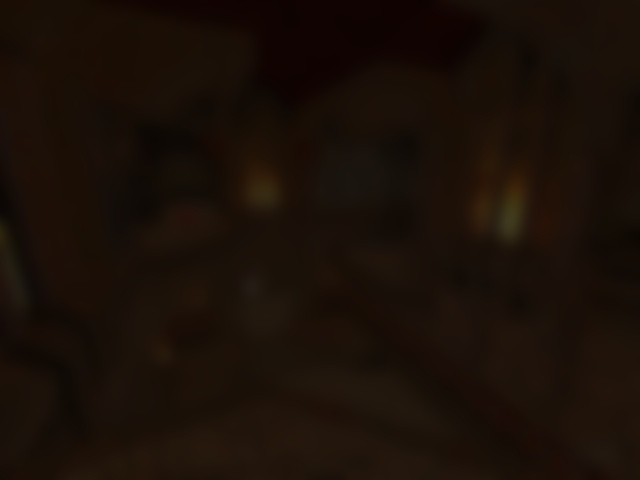