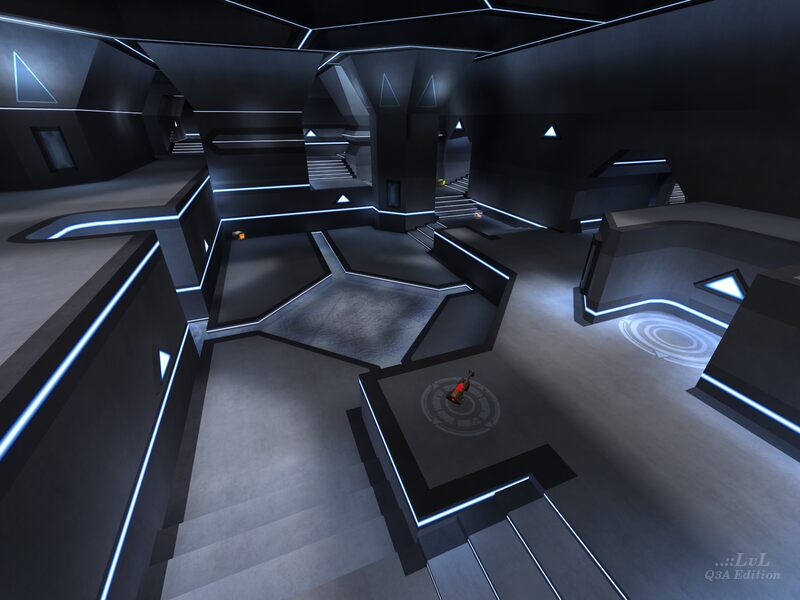 Murder in Blue Minor is a map created by an individual under the simple, yet enigmatic alias "Player". The title sounds like it has something to do with music; presumably referring to the minor scale and the blues scales or blue notes, going off a quick Google search.

evillair's DSI texture set dresses up the environment in a sleek, elegant style that fits perfectly with the map's name. The minimalism is elevated thanks to varied angular diversity in the brushwork, with a personal highlight of mine being the ceiling in the main room with the RG. Glass panels and pools of water add a finishing touch of finesse to an already splendid-looking arena.

It pains me to say, then, that the gameplay in this map isn't quite as melodious as the visuals would suggest. At first glance, nothing seems too problematic; all standard weapons bar the PG are present and health/ammo boxes are distributed well without being too skimpy or overbearing. There is only one armor, the YA sitting on a ledge with the GL, which is reachable (without rocket jumping) either by a staircase leading up to it or by carefully jumping off an adjacent staircase onto the ledge. It is just high enough that you can not just jump onto it, which is a bit aggravating but not really a criticism. Despite only having one armor, there are plenty of armor shards to pick up as well, so you'll generally have some protection wherever you may be. The map is fairly open, but there is usually good escape routes and columns/ledges to take cover behind when needed.

There is also a MH I didn't mention yet, and here is where the faults in this map start to show, much like discordant notes in an otherwise majestic symphony. The MH is located on a high, thin ledge, overlooking an open, L-shaped area. This would not be too bad by itself, but there is more goodies for players up on the MH platform that turn it into a camper's paradise. To each side of the MH are 2 sets of 3 armor shards each, for a total of 30 armor (5 per shard x 6 shards) in addition to the health boost granted by the MH, ensuring the player never has to go back down to ground level to get geared up. And not much further does the player have to travel to grab a box of slugs for the RG AND a LG, too.

The camper only has to get the RG first, but once they do and make it up there, they can now just sit around and eat up the MH + shards while restocking with the slug ammo box, all while having the LG to strike down players trying to come up the jump pad, if the RG didn't get to them first. There is another path to the MH from where the RL is, but it is so long and thin that it's extremely easy to snipe players coming that way before they have a chance to reach you. Playing this map, I employed this camping strategy and had very few issues racking up frags with little risk-taking.

It's a real shame whenever an otherwise smooth, free-flowing orchestra of players battling each other in perfect harmony can be interrupted by the sour notes of a laid-back camper, but that's exactly you get with Murder in Blue Minor. Maps like this are a perfect candidate for D!ABLO's Map Editor as a path to salvation, as I believe the layout is quite workable. If you want to make some adjustments with it, or play this in a non-item game mode like Clan Arena, you will probably have a good time. Otherwise, I sadly can't recommend it. 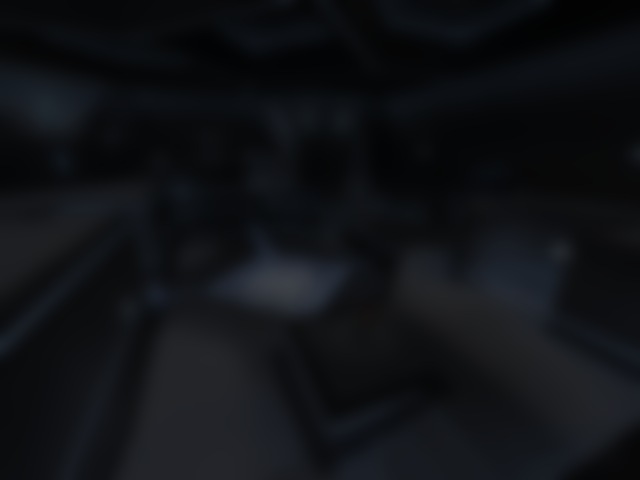