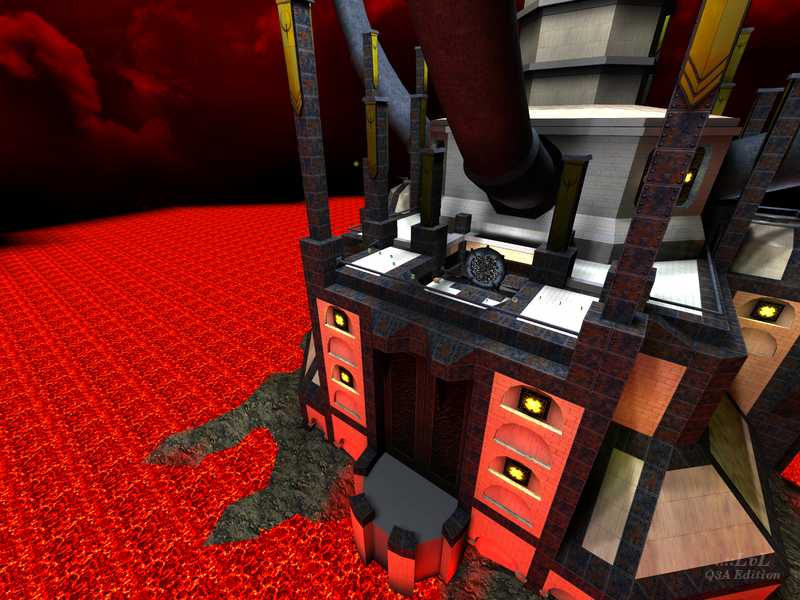 In the middle of a sea of lava sits a small island with an outrageous structure. The purpose of this building is not very clear except it appears to be out to destroy all who enter it. On top of that, there are two versions. The second version is a little friendlier and you might even say enjoyable for a DeathMatch against bots or fellow players.

The first version of the map is full of traps and triggers that will, at a guess, drive you mad. The other version has the traps removed. The central area of the structure (both versions) is where a lot of action takes place. You can get outside on to the building, which is visually interesting and will give you a short break from the internal craziness.

The construction of the map and the visuals are very impressive and as with other maps by this author, push the Q3A engine. Gameplay is another story. Traps can work in a DM map, but they are tricky to get right and feel correct. The first version of the map has too many, at least for me and they are not clear enough to be fun.

The level has structural issues like when you chase someone on to a launch pad and you end up in the lava or miss the landing point. There are other small issues which might be something to do with how far the game engine has been pushed.

The author has a lot of skill for mapping and interesting ideas. With more play testing and some serious self-criticism or possibly even a change to a dedicated single player game, this will be one author to watch.

If you have the time to check out something new or different, grab it. I just don't see many people playing this release for very long. The second version is more fun.