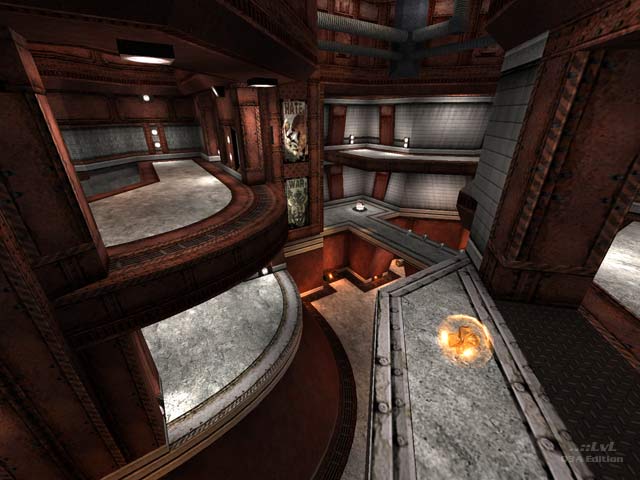 A modern mapping attempt from Redfella after an astounding 7-year break from the Quake III level design scene. I wasn't around to watch his previous efforts sprout, but this one from him certainly caught my attention.

Panopticon is a term used for a conceptual institutional design where watchmen have sight over the inmates without the latter having knowledge of their gazing eyes. It complements the arena perfectly, as it uses the grungy Single Malt texture set from the infamous Rorshach (and a select few from evillair's E8 set) - which, combined with the various propaganda posters on the wall, sets the theme in stone. In a way, the author describes every arena in this game with the title - the fighters battling for glory, often blissfully unaware of the Vadrigar's presence - always watching, never seen.

The layout is a convoluted, multi-tiered affair that won't disappoint in the department of vertical goodness. There does not appear to be any power-ups, and nor is there a Mega Health, although the RA and YA are still up for grabs, and all weapons minus the BFG make an appearance.

Naturally the texture set carries with it some monotony in the color scheme, but if you are not a picmip player, you may use the posters on the walls as telltale signs of your location. The RL is located in the back, with the PG further towards the front in a remarkably tall room. The GL is in a corridor on the second floor, just leaving the area, in a comfy corner.

The LG finds itself in a smaller room where a Quake 2 poster resides. In the front is an interestingly well-constructed room with the Purity through Service poster. Here you can find the SG on the second story, and the RG in an offshoot room on the third. I question the RG ammo being placed smack-dab next to it, and combined with it's high positioning, I'm afraid it'd promote too much camping. That does not exactly promote skillful gameplay decision-making. The RA is found in a room containing some kind of machine, and the YA is in an angular, tight hallway on the first floor. The combination of claustrophobic hallways and vast battle zones create a balanced environment. Sadly, TDM and 1-on-1 support is not offered, only FFA. The readme says you can use from 2-4 players, though I feel it's large enough to allow up to 6.

Here is a clever, maybe semi-useless tip: If you have solid timing ability, you can attempt a grenade-rocket jump off the jump pad closer to the PG's side in the tall room (with the Headhunters III sign) and position yourself to land in a tiny compartment. You can not really do much from here other than rain fire on your opponents from above, and you won't have much of a vantage point from there. It would have been neat to place a power-up there and have a teleporter leading to it, so you can drop down and surprise them if you are willing to endure a painful descent to the cold, hard ground.

If you are dying for some decent fights, give Panopticon a whirl. But don't give those campers a chance to roast their marshmallows.

Tigs notes: Although the map supports bot game play, they do little more than stand around. This is one map you really need to challenge humans in. Save it for a LAN or set up a home server.

Bot file patch: Colton has made a bot file patch that improves the bots a lot on this map. Highly recommended that people download the patch as well as the map. 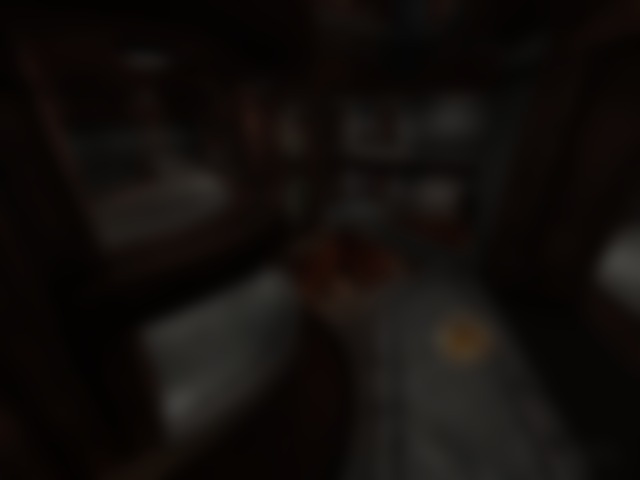